Elton Brand (and His Shoulder) Will See You Sometime Next Year 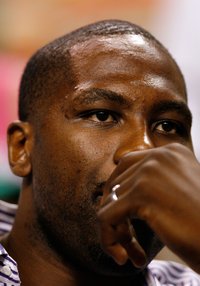 The news went from bad to worse for Elton Brand and the Philly Sixers yesterday. After an inspection of his dislocated shoulder by the medical staff, it was decided that it’d be in everyone’s best interest if EB shut it down for a while.

The Philly Inquirer has the details:

Later that night, Brand went off-site for an MRI. Yesterday, the Sixers confirmed the details of his injury: fracture of the humeral head (bone), tear of the labrum.

In layman’s terms, that means the Sixers’ leading scorer is pretty badly hurt. The estimated recovery time is about a month because the Sixers’ doctor, Jack McPhilemy, said he did not believe the injury required surgery at this time.

Brand, who has struggled to adjust his bruising style to the Sixers’ run-n-gun mentality, will be out of action for the second time this season due to injury. Clippers fans everywhere just nodded gloomily.

It’s fair to say that things haven’t exactly gone according to plan in Philadelphia this season – the team is three games below .500, and has struggled to forge an identiy – and this latest setback will do nothing to inspire confidence in the Sixers faithful.

Thank goodness for the Phillies.