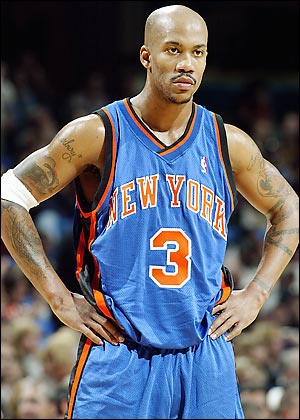 We may no longer get to enjoy the stylings of one Stephon Marbury in a New York Knick uniform, according to Frank Isola of the NY Daily News. The paper, citing two high-ranking Knicks officials, says the team is looking to get rid of their starting point guard, a move that would leave NYC tabloids absolutely crestfallen:

Knicks brass is considering what options it has to reduce Marbury’s role or get rid of him entirely.

A trade is unlikely because Marbury, the team’s controversial point guard, is scheduled to earn $42 million over the next two seasons. Dolan’s and Thomas’ history suggests that they would not rule out negotiating a buyout for Marbury, who then would become a free agent.

This is all coming on the heels of a deflating loss at home to the Heat on Sunday; Stephon made two critical errors on both ends of the floor in the closing moments, essentially costing his team the win.

With the stubbornly proud franchise off to a decent start (all things considered), I’m a little surprised that they’re looking to make such a drastic change this early in the season. Besides, if Marbury is bought out or planted firmly on the bench, who’s gonna run the show? Nate Robinson? Yikes.

At the moment, it is not certain whether Stephon will play during the Knicks’ four-game road swing which begins in Phoenix tonight. Marbury, 30, is averaging 15.2 points and 6.8 assists through five games so far.