End of the Road for Phil Jackson, Lakers 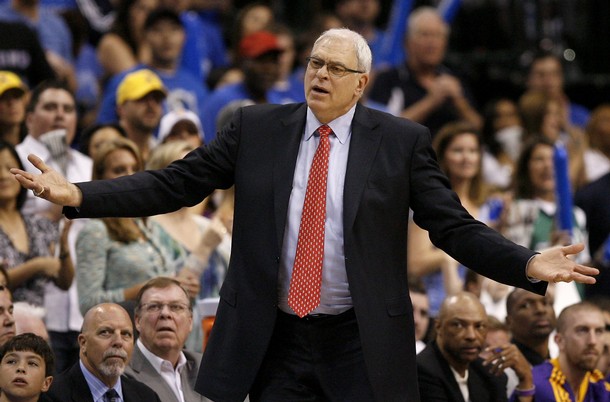 Initially, he kidded reporters regarding his decision to retire from the NBA, as he has done so many times throughout his legendary coaching career. But, in the end, Phil Jackson admitted that he had coached his last game.

It was an inglorious, downright embarrassing conclusion to the greatest coaching run in the League’s history, as the Dallas Mavericks swept the Los Angeles Lakers out of the postseason, leaving a final, bitter taste in Jackson’s mouth.

Though things didn’t end the way he had hoped they would, Phil sounded relieved to see the Lakers’ frustrating year finally, mercifully come to an end:

“[It] feels really good to be ending this season to be honest with you. I came back this last year with some trepidation. Kobe’s knee was an issue and obviously our team was older. The thrill of trying to chase a three-peat is always an exciting thing. But, yes, I knew it was a big challenge for this team to three-peat. We’ve gone to the Finals and to go back twice and win it after losing ’08 puts a lot of strain on the basketball club from all angles: personalities, spiritually, physically, emotionally, and getting charged up for game after game and assault after assault when you go in and play a team. So, it was a challenge bigger that we could beat this year.”

(And you final game I assume? Was this your last game?) – “I haven’t answered that, have I? And you’re not going to force me to answer it. But, yes, this is in all my hopes and aspirations that this is the final game that I’ll coach. This has been a wonderful run. I go out with a sour note after being fined $35,000 this morning by the league, so that’s not fun having a feeling like I’ve been chased down the freeway by them. But as Richard Nixon says, ‘You won’t be able to kick this guy around anymore.'”

So, now, the Lakers’ offseason of uncertainty begins, where the search for answers will begin at the head coach position, followed by attempts to add quickness, three-point shooting and better bench production.

The Los Angeles Lakers will be fine — history shows that they always manage to bounce back — but Phil Jackson set a standard of excellence that will prove impossible to surpass, let alone match.