Etan Thomas: The Dawn Of A New Era 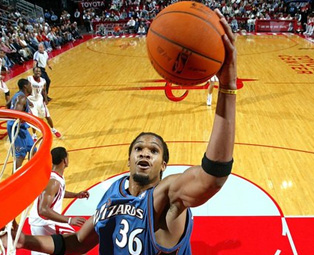 There have been countless opinions expressed and articles written regarding the new ball. The overall perception seems to be that David Stern, out of the kindness of his heart, listened to a bunch of spoiled crybabies whine about not liking the ball, took pity on them and decided to give them their old ball back. As if it were some type of meaningless toy. Some of the articles and commentary have really surprised me, because so many people are ill-informed. Apparently, much of the public opinion was that we, the players, should be happy with whatever ball we use and should simply shut up and play.

Lets review the facts: The NBA decided to use the new synthetic ball this season without consulting the players. The ball was previously used in the All-Star Game, NBDL games and summer league games. Otherwise, the players were never exposed to the ball, and had no say in its implementation. After the players across the board reacted extremely negatively to the ball — claiming it was too slippery, bounced less than the old ball, that the spongy material created friction that irritated and caused cuts to player’s hands — the NBPA filed an unfair labor practice (ULP) charge with the National Labor Relations Board (NLRB).

Under the National Labor Relations Act (NLRA), which is the statute that governs the relationship between labor and management, management must bargain with the union over three things: wages; hours; working conditions. We (the union) claimed that the NBA was not entitled to make such a fundamental change to our working conditions, unilaterally, without bargaining with the union.

Before the charge could be found to have merit or not, the NBA decided to change back to the leather ball, with the Commissioner conceding that he made a mistake and that the players should have been consulted before instituting such a significant change.

However, these facts were apparently unavailable to many reporters, columnists and commentators. They created the public perception that the players were once again unjustly complaining about something we weren’t happy with.

Creating an overall illusion — no matter how off base or completely wrong it is — can change the public perception of what is being implemented. Furthermore, it can garner support for something the implementer knows is wrong. We saw this with the invasion of Iraq, but that’s another essay. Knowledge is power, and people perish for lack of knowledge.

A wise man once said, “Know the business of the business you’re in.” It is imperative that my colleagues become fully aware and avoid a state of complacency. We cannot be trapped in an illusion that the fruits we enjoy now will forever be plentiful and abundant. Things can and will change right before our eyes if we don’t stand up and fight.

Now, don’t get me wrong, because it is an absolute blessing to play in the NBA. Every morning when I wake up, I thank God for allowing me to live a dream. This issue I’m writing about is not a matter of being ungrateful, a sentiment often attached to NBA players.

What Commissioner Stern will attempt to employ, if we allow him to, will devastate the future of our league as we know it. Collectively, we have a strong voice, but if we don’t understand the rules, how can we play the game? If we didn’t understand that legally David Stern was in direct violation of the Collective Bargaining Agreement by changing the ball, we would have been rendered powerless. We would have been left to our complaints, which would have fallen on deaf ears.

What could possibly happen in the future could greatly exceed excessive technical fouls, the dress code, meaningless nagging about tucking in our shirts, wearing wrist bands below the elbow and the length of our shorts. If we don’t speak up now, it could get a lot worse.

The league would love to transform us into the NFL, and they will continue to attempt to chip away at guaranteed contracts. During his attempt to gain “cost certainty,” the Commissioner has previously offered during collective bargaining to simply pay one guaranteed amount and allow the players to divide it among ourselves — so long as the amount is fixed in advance, and the owners need not pay even a dollar more than the guaranteed amount. In essence, that would completely cut out the NBA’s middle class. (Interesting how there are so many parallels to a certain administration.)

The way things are structured now eats away at the owners, who must guarantee a player his salary even if he is not “earning” it. But what exactly is “earning it”?

If you get injured, do they want the right to cut you like in the NFL? They try to win players over during the bargaining process, arguing that guaranteed dollars paid to “undeserving” players takes away from the pool of available dollars that could be paid to “deserving” players. (This is similar to the argument that taxing the rich punishes them for being rich.) Meaning if you have a bad year, they can rip up your contract and force you to sign a new one or be waived, like in the NFL.

During this last Collective Bargaining negotiation, David Stern put an offer on the table saying that he would be willing to do completely do away with the salary cap if the players would agree to non-guaranteed contracts. Don’t think for a moment this proposal is not going to come up again.

No disrespect to Billy Hunter, because I think he is doing a wonderful job fighting for us, but I feel we should consider examining baseball’s example, maybe even actually having a sit-down with their union to see exactly what they did to make their group so strong. I look at their union with eyes of admiration, because that’s how a union should be. They don’t even think about getting licensing checks — that money is put into a fund just in case it’s needed in the future. We should do the same. We should only distribute them once a player retires. In addition, the baseball players are strict about players who act in ways that are detrimental to the union. If a player has a secret meeting when “they” pull you to the side to divulge information, or if a player speaks out of turn to the media (we should have a gag order) or crosses the line in any way, that player is out of the union. No longer protected nor allowed to partake in any of the benefits that come along with being in the union. We should have our own zero tolerance policy. We also need to get our international players involved in the union, being that our future is intertwined.

I now hold a seat on the NBA Player’s Association executive board, so I am going to do what I can to implement some of these changes and make our union as strong as it can possibly be. I feel that it should never have previously come to a lock out. If we don’t rebel, don’t voice our disapprovals, don’t know what we can legally do, don’t have a unified front, believe me, they will not listen. Nobody wants a lock out, but they have to know that we mean business. Then, it never even has to come to that. We can simply work together respectfully.

As NBA players, we collectively have to wake up and become aware. What type of league are we leaving for the future generations? For our children? There is not one player alive who wouldn’t want his son to follow in his footsteps, wear his number, attend his college, maybe even break one of his collegiate records and play in the NBA, just like his father. Players before us have made countless sacrifices in order for us to be able to enjoy the life we have.

It is imperative that we fight to preserve this league.

Raising consciousness to the height of light and truth
Awareness takes on a breathing like necessity
Preparing to block the avoidable destiny
Altering the events that would present a dismal future
Security would be something of the past
Cast into the sea of a distant memory
We would become mirrored images of the national football league
Left to reminisce on the good old days
The previous ways in which we used to enjoy our individuality
The elapsed freedom of creativity
Giving birth to a seed of non threatening entities?
Soothing the need for Middle America’s level of comfortability
So smile for the camera and show that you care
Killing you softly as you stand unaware
Transformed into robotic machines
Emotionless clones
For the right amount can your soul be rendered?
Tattoos, cornrows, and dreads may be next on the agenda
I don’t need a crystal ball to interpret the monologues of the commissioners’ plans
I can see them clearly like a cloudless sky
Tap dancing has never been the ship that I’ve sailed
Together like a fist we can stand
All we have to do is rebel