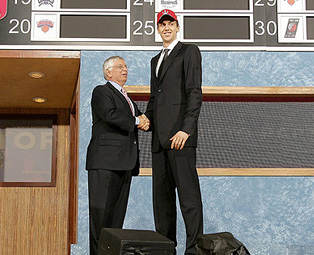 Taxation without Representation – Europe’s attempt to close its borders

According to press reports in Europe, the Euroleague, in an attempt to stop the migration of young European players to the NBA, has been forcing its players to sign outrageous contracts, with stipulations and clauses that make a leaving Europe to play in the NBA as difficult as ever.

The most significant clause states that any player under the age of 24, wishing to play in an organization not part of Europe’s governing basketball body, ULEB, basically meaning the NBA, will have to pay his team € 1.5 Mil. ($1,939,200). The Euroleague’s stipulation does state that only of the player’s new contract in significantly higher than his old contract, must he pay the fine. However, most young players in Europe get paid very little money, compared to contracts in the L, meaning any contract in the NBA would automatically be significantly higher than the European contract.  Furthermore, most European 20 year olds don’t have an extra €1.5 Mil lying around. I don’t.

-A team may terminate a player’s contract if he’s injured, and pay him only half of the sum he was due, until the moment of the injury. Allan Houston and Big Country are smiling.

-A player under contract wanting to leave to play in the NBA will have to pay a minimum fine of, € 1 Mil.

-A player who gains weight will be warned. If he does not lose the weight within 15 days, he will be fined 5% of his salary. Et tu Boris?

Interestingly enough, in Spain, CEO of Euroleague Basketball Jordi Bertomeu’s home country, players refused to sign the contracts. The European player’s union is also starting a public campaign against the new contracts. The new contracts make it difficult, as if it wasn’t already, for American players to go back to the NBA after a few years in Europe. Furthermore, will this put an end to European ballers coming over to the NBA? One wonders if the Sternbot put the Euroleague up to this, because along with the minimum age rule in the NBA, the Euroleague contracts emphasize players’ maturity and experience when they come to the NBA. Sure, under the new contract,, situations like Darko (and Andrea?) would never happen, but what about Dirk, TP, Pau and AK47? On the flip side, doesn’t the Euroleague have a right to protect itself from players leaving to the NBA? But at what expense?  Should they hinder the professional careers of their players?