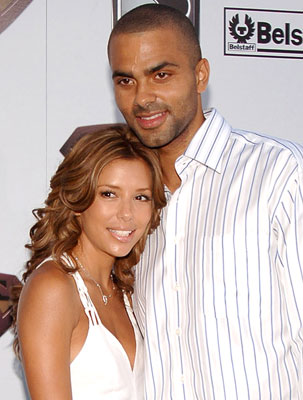 If you were to ask Tony Parker which opponent he’s had the toughest time scoring against in his career, he won’t name the Pistons or Bulls, he’d probably say Eva Longoria. Not only does Wifey not want him to have a bachelor party before their wedding this summer, now she won’t even have sex with him before the big day.

Desperate Housewives star Eva Longoria has imposed a ‘no-sex’ policy on her fiance Tony Parker until the couple exchange vows in July. The actress implemented the ban to help basketball star Tony reach the NBA play-offs with the San Antonio Spurs.

She told US chat show host Jimmy Kimmel: “Luckily, we’re getting married after the play-offs and then we need to consummate the marriage. I scheduled it that way.”

I’ve heard of soccer players abstaining from sex before the World Cup (and other big matches), but this is the first time I hear of a basketball player being denied entry into the post by a female. Anyhow, if you see Tony Parker penetrating with a little more fervor this postseason, you’ll know why.