Even the Summer League Has an MVP ‘Controversy’ 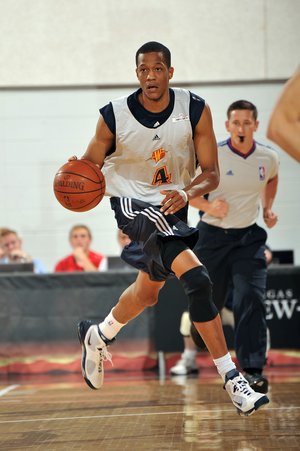 Why should the regular season be the only one to enjoy a good old fashioned MVP debate?

To be honest, I haven’t caught a nanosecond of Summer League play, and I don’t feel any poorer for it as a hoops fan. Some people, though, take this stuff quite seriously and follow it religiously. That’s the overwhelming reason why you’re getting this post.

Blake Griffin was named MVP of the Vegas Summer League, and even though his jersey wasn’t retired in sad and hilarious fashion, this honor has some quite heated. Namely, fans and media in the Bay Area.

From the Contra Costa Times:

I just learned that Blake Griffin was named MVP of the Las Vegas summer League. I don’t know who chooses, but certainly they spent too much time at Margeritaville. Anthony Randolph shoulda been MVP.

Certainly, Griffin had more hype. He cemented himself as one of the most dominant rookies in summer league history and many expect him to have a stellar rookie season. And, no doubt, many of the voters, whoever they are, may not have seen much of Randolph since the Warriors played the first half of the schedule and most people came for the second half, when Griffin arrived. Randolph did miss his last game. Still, a look at the stats would’ve been enough to crown Randolph the winner:

Hard to argue with the above. Especially when one considers that Randolph’s team had a significantly better showing this summer than Griffin’s.

Now, if you’ll excuse me, I would like to get back to not caring.