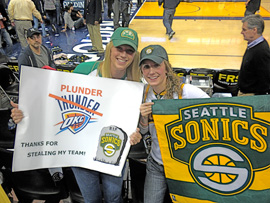 It’s been a difficult season for Don Nelson. His Warriors had so many major injuries that some nights they were barely able to suit up enough players. Nelson, 69, has been portrayed in the local media alternately as a doddering old man hanging around to break a record, or as a mad scientist more concerned with absurd lineup experiments than with defense or winning.

But Nelson has also had reasons to smile. Led by emerging ROY candidate Stephen Curry and buoyed by a group of good D-League call ups, the Warriors have finished the season strong. And Nelson, of course, recently became the NBA’s all-time leader in regular-season coaching victories.

Nelson’s relationship with the media has remained touchy at best, but I caught up with him at a good time.

Like his mentor and former coach, Red Auerbach, Nelson loves a good cigar. We chatted about 90 minutes before last night’s game, as he relaxed with a stogie in a quiet spot just outside the player’s entrance to the arena. For the record, he doesn’t recommend that other people take up the habit. “You shouldn’t even start,” he said.

SLAM: As long as you’re smoking a cigar, maybe this is a good time to ask you about Red Auerbach. How much of an influence was he on you?
Don Nelson: He was a huge influence. It started when I played for him, but I didn’t play for him for long. When he was the GM, I used to come to shoot early. On my way in, usually around 5 p.m., he was usually in there taking his little siesta. I’d wake him up and we’d sit there and talk for 15 or 20 minutes every day. I learned a lot of basketball there. I asked lots of questions, and he gave me lots of answers. I’ve used all of it.

SLAM: Red is generally credited with inventing the fast break and transition offense. Was he an influence on you in that respect, too?
DN: He must have been. The Celtics always were a running team, ever since Red was there. The fast break was an important part of what we did, and we scored at a high level. I’m sure that influenced me more than I’ll even remember. It had to.

SLAM: Even though you’re now known as an offensive-minded coach, your teams in Milwaukee were excellent defensively, with players like Sidney Moncrief who would pressure people all the way up the court. The way the Warriors play today is very different. Is that an evolution of the game, have you evolved, or is it a question of personnel?
DN: My team in New York was a pretty good defensive team, too, and they continued to play good defense when I was there.

A lot of it has to do with the character of your team. If your best player is a good defender it really helps. It’s a contagious thing. Moncrief was one of the great defenders and everybody else got in line, guarded, and did the best they could. And of course I had three big centers who didn’t mind giving fouls. So we were hard to score on.

When your best player isn’t a very good defensive player, it works in reverse. If you look at some of the other teams I had, like the teams I had here, Chris Mullin wasn’t a very good defender but he was our best player. Dirk Nowitzki and (Steve) Nash are great players, but they’re not great defenders. They make a huge impact in other ways. You’ve got to make adjustments as a coach. You can’t make demands on those guys. You can work hard at it, you can try all you want, but they’re not going to be very good at guarding the defensive end. You make adjustments because those guys have to be on the floor, because they’re your best players.

SLAM: Another thing you’re known for is the point forward, going back to Paul Pressey and even before him. Was the point forward really a new invention, or was it more of a throwback to an era when every player on the floor was expected to be able to pass, dribble, and shoot?
DN: You need a mentality that you can run a team at any position. If you have that mentality, you should even be able to do it with a center, if he has the ball in his hands. But just because you’re a small forward doesn’t give you the mentality to run a team. Paul Pressey had that mentality. It’s very rare to find a guy like that. In Seattle, John Johnson was a point forward. I don’t think they called him that, but he brought the ball up and initiated the offense. He could very well have been the first.

SLAM: You’ve been a GM and today you still have a say in personnel decisions. Do you look for players who could potentially be that well rounded when you’re drafting and acquiring players?
DN: I look for good basketball players in the draft. When I give my recommendations to the guy who makes the decision, that’s one thing I look for: A guy who is not just one-dimensional but who can pass, shoot, guard, and rebound.

SLAM: How did you and your wife both having cancer change your perspective?
DN: My life was in order before I got cancer, so I don’t think it changed me very much. I think my changes actually happened before that. I just had to deal with it (the cancer). I made changes in my coaching before that because I was too intense, and I needed to relax and calm down a little bit. It was turning into a negative for me. I wanted to win so badly that I was too demanding. Now I have a better blend, and maybe I’ve gone too far the other way. Maybe I’m too soft now. That could be true at 70. But anyway, there’s more than one way to do it and I think I was doing it wrong when I was young.

SLAM: You seem to have connected with this year’s team in a unique way – they have a strong bond with you. How did that come about?
DN: I think with every team I’ve ever coached, maybe with the exception of New York, I’ve had that bond with all my players. I give them freedom, they know I love them. Sometimes I’m hard on them, but the bottom line is when the game is over, the love is still there. And it’s something that they know.

SLAM: What is it about this team that they keep coming back in games that will make no difference in the standings, such as the 20-point comeback against Oklahoma City this past weekend?
DN: A lot of it has to do with the fact that we’ve picked up some D-Leaguers. They’re not writing it in, they’re playing. Some veterans, when they know they’re out of it, play the game differently. Young players and guys getting their first opportunities don’t do that.

SLAM: How has the coaching profession changed since you started 30-some-odd years ago?
DN: It’s gotten way better. Even more than the changes in the players. The coaches are all solid now. They all coach both ends of the floor. There’s not a bad coach in the League; there’s not a guy where you can say, “I’ll outcoach him and get a win.” You can’t do that anymore. You could in the old days.

SLAM: It also seems like there’s better scouting now than in the old days.
DN: We actually have too much information now. You have to cut through it, because the players can’t do all of it. So you have to take about 15 percent, and that’s what you give them. The coaches know 100 percent, and you can use it in timeouts and situations, but you can’t give your players too much. You can’t cloud their minds with too much information. You’ve got to let them play, and make the game simple and fun.

SLAM: What has been the key to helping D-League players become successful?
DN: They have to have the opportunity first, and we give them an opportunity that a lot of coaches don’t. They put them in a hole and say, “you’re a power forward, this is what you have to do.” If a guy has skills other than that, we let them come out here. We let them dribble, we let them pass, and we let them make plays, as long as they’re good players. If you’re not a good player, then you have to be a role player. But if you’re a good player and have the ability to make plays and pass and do the other things, then we encourage that.

SLAM: What do the Warriors have to do to make it to the next level?
DN: We’ve got to rebound better. We’ve got to get some size; we’re a small team right now. Even though we can be tall, we’re still thin.

SLAM: Curry is a leader as a rookie…
DN: He is the most natural leader we have. And we haven’t asked him to lead yet, we’ve just asked him to be a rookie. But the leadership will come. It will be real easy for him. He’s like the pied piper, everybody wants to follow him, do what he does, and do what he says. He doesn’t say very much right now, but there will come a time.

SLAM: What does it take to be a leader in the NBA?
DN: You can’t force leadership. Leadership has to be there. It has to be natural. You can’t make a guy be something he’s not.

— In a press conference right before this interview, Nelson reiterated his intention to coach for one more season, the last on his contract.

— At the Warriors’ recent game against Oklahoma City, there was a noticeable amount of Supersonics green in the crowd – not necessarily to root for the Thunder, but to razz Thunder management. Among them were Seattle-area native Megan Osmer, assistant coach of the women’s basketball team at nearby San Jose State University, and her sister Stephanie, who got tickets right behind the Thunder bench and held up signs during every timeout. They asked SLAM to repost the link to the film about the Sonics fiasco: www.sonicsgate.org

— The Warriors believe in Stephen Curry’s ROY candidacy to the point that team officials called every single voter over the past two weeks.