Expectations Are High in Orlando 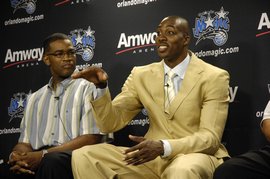 Even after all of their wheeling and dealing this summer, most projected the Orlando Magic to be a good (certainly not great) team. A squad perfectly capable of winning somewhere in the neighborhood of about 50 games, and then losing in the second round of the Playoffs.

The GM, Otis Smth, has much loftier expectations for the franchise. And his players seem to have bought into the belief, too.

Before the Magic ever went through a workout in training camp back in October, Smith had pictures of the NBA’s Larry O’Brien trophy plastered on the entrance of the practice facility and on the inside of each dressing stall of the locker room.

“Our goal is to win a championship, nothing else,” Howard said following Thursday’s practice. “Otis putting up pictures of the trophy and the signs in my locker asking, ‘What have you done today to help us win a championship?’ they motivate us. I took that card and I put it up on the mirror in my house and I read it every day. It made me work harder and be more focused. It’s just the kind of motivation that we need from our general manager.”

Just imagine if poor Otis was the GM in Detroit, Orlando’s opponent in the upcoming round. This is probably the sign he’d put up in Rasheed Wallace’s locker at the start of the Playoffs: “We not only expect a title, but also for you not to yawn in the fourth quarter!”