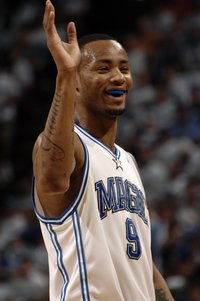 The Pistons played without their floor general Chauncey Billups in Game Four, and still, they managed to outsmart and outgut the young and inexperienced Magic on their own home floor. They have them on the ropes.

As the series shifts back to Detroit, and with Chauncey’s hamstring starting to feel better, there’s no reason to believe Orlando has a shot at forcing the series back to Disney World.

“For some reason, I feel we are still the better team,” Rashard Lewis said. “We just made too many mistakes at the end. It was our mistakes, nothing they did. They still got to beat us one more time.”

The younger team? Obviously. The more athletic team? Sure, why not. But the better team? Surely you jest, Rashard.

As if the Pistons needed any more motivation for Game Five, Lewis’s teammate Jameer Nelson had this nice little prediction: “We’re going to make adjustments, and we’re going to go there and win,” Nelson said.