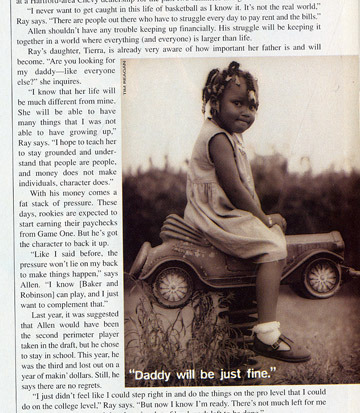 You know where Ray Allen’s at (the NBA Finals). You know where he went to college (UConn) and where he’s played in the League (Milwaukee, Seattle, Boston). Now we want to remind you where he’s from. And thanks to this feature from SLAM 13, we can do just that.—Ed.

As he prepares for his rookie season with the Milwaukee Bucks, you can’t help but wonder where Ray Allen got his game on. When did he develop his polished jumper, his killer crossover, his tenacious rebounding? Just how did he get so damn good?

He might tell you it happened after long hours of practice. Ray’s mother, Flo Allen, disagrees. She will tell you “It happened at birth.”

Don’t get the wrong idea: this ain’t the second coming of the Millers. But for the Allens, athletics are all in the family.

“It’s something that we never talk about in our household. You just know that you play sports,” says Flo. “With five kids, you have to keep them busy. It fills voids, and it keeps them occupied.”

Flo knows.  This woman from Blyville, AR, who picked cotton as a youngster, averaged a double-double (10 ppg, 10rpg) playing semi-pro ball at the Bentwaters Air Force base in England.

“The military was so suffocating. You couldn’t do anything without your husband’s approval,” Flo says. But we, the women of Bentwaters, were giving the base a name. We played with an attitude. ‘Let’s see what you got’”

As Flo threw elbows and intimidated opponents with her intense and aggressive style of play, she got her kids involved with basketball, football and volleyball, along with their studies. Somewhere along the way, they started developing into athletes themselves.

“It was understood that, if the Man upstairs was willing, you were going to continue to work harder, to get better,” Flo says. “I knew that it would take them a long way.”

Flo’s marriage to Ray’s father, Walter (himself a former semi-pro hooper), dissolved a couple of years ago, but it certainly hasn’t hurt the family’s spirit. The minute you come into contact with the Allens, you know competition drives the family.  Awards hang wall-to-wall in their home, and the talk had better be about hoops, especially when Ray is on the tube.

“It’s not just Ray, you know. He gets all the attention, but John [Flo’s oldest] was the leading rusher in South Carolina his senior year of high school [at Hillcrest HS],” boasts Flo. “And Kim is an outstanding volleyball and basketball player.”

Ray’s dominance at UConn pushed 22-year old Kim, the eldest daughter, to carve her own niche. She has become one of the best athletes at Benedict College (SC) has ever seen. At 5-10, Kim has pulled down 1,000 rebounds and scored 1,000 points. She was recently named NAIA MVP in volleyball and an NAIA scholar All-American in accounting.

Ray’s 5-9, 15 year-old baby sister Kristie is no slouch either. After Flo and Kristie moved from South Carolina to Connecticut last January to be closer to Ray, Kristie went out and made the varsity girls basketball team at East Hartford High—in mid season.

She constantly talks about her dream of playing hoops at Tennessee and has been invited to attend Coach Pat Summit’s basketball camp this summer. That decision could cause some divisions, since Tennessee won the women’s championship last year—beating UConn in the semis.

The difference between Ray and his siblings is that his career is being shown live on national TV.  You’ve seen it, you know what he can do.  But check the numbers.

Ray walked away from UConn after his junior season, after posting the second-highest single-season point total with 818. He scored 1,000 points faster than any player in UConn history and shot 44.8% from three. He averaged 23.7 ppg this past season, grabbed six rpg at the two (second on the team) and shot 48.7% from the field, good for third all-time at UConn. His 115 threes set a single-season UConn record.

While his college numbers were good enough for three years and nine-point-something million as a top-five pick in the NBA Draft, he’s not without his critics.

“I’m worried about Ray Allen putting the ball on the floor in the pro game,” says John Lucas, former GM of the Philadelphia 76ers. “He seems to have problems taking his man off the dribble.”

At the tail end of last season, Allen also took hits for not being able to take over big games. When Allen Iverson and his Hoyas embarrassed UConn 77-65 on ESPN, Ray felt the heat.

“I didn’t shoot well,” Ray admits. “We didn’t play well as a team. But I know I’m allowed to have a game like that.

“We had a bad night. It was one game. It was our first and only loss in the Big East this year. It’s like a bad day at the job when you don’t have any sales. I have blocked that game from my memory.”

The volume of criticism, however, was an eye-opening experience for the Bucks rookie.

“After that G-Town game, I got a chance to see how people really are,” Ray says. “One day you’re the greatest player ever. The next, you can’t dribble, you don’t show up in big games.

Allen continues, defensively, “That’s why they all call you critics or reporters, you-all think the game while I go out and play it. I can take you on the court and show you what I can do. If people have something to say, play me. The ball doesn’t always fall through the hoop—even Jordan has bad games, and I’m no Jordan.  But I can play this game.”

If you sit with Ray for any period of time, you can’t help but notice his serene nature. He will tell you that he has to be this way. Responsible for parenting a 3-year old, Ray worked at a Hartford-area Chevy dealership and got a taste of real life.

“I never want to get caught in this life of basketball as I know it. It’s not the real world,” Ray says. There are people out there who have to struggle every day to pay rent and the bills.”

Allen shouldn’t have any trouble keeping up financially. His trouble will be keeping it together in a world where everything (and everyone) is larger than life.

Ray’s daughter, Tierra, is already very aware of how important her father is and will become. “Are you looking for my daddy—like everyone else?” she inquires.

“I know that her life will be much different than mine. She will be able to have many things that I did not have growing up,” Ray says. I hope to teach her to stay grounded and that people are people, and money does not make individuals, character does.”

With his money comes a fat stack of pressure. These days, rookies are expected to start earning their paychecks from Game One. But he’s got the character to back it up.

“Like I said before, the pressure won’t lie on my back to make things happen,” says Allen. “I know [Baker and Robinson] can play, and I just want to complement that.”

Last year, it was suggested that Allen would have been the second perimeter player taken in the draft, but he chose to stay in school. This year, he was the third and lost out on a year of makin’ dollars.  Still, he says there are no regrets.

“I just didn’t feel like I could step right in and do the things on the pro level that I could do on the college level,” Ray says. “But now I know I’m ready.  There’s not much left for me to prove. I do understand that there is a lot of hard work left to be done.”

To be sure, Ray Allen will never be just another basketball player. He’s a special player with a special gift that was nurtured in a family of athletes who encouraged and pushed each other to be the best they could be. It shows.

Now the 21-year old is gonna be expected to hit the big shots for a squad that was supposed to be a lot better than they were. He joins the Big Dog and Vin Baker, a front line for the next decade. Ray’s gonna get his chance to get his. But people are gonna remember that the Bucks drafted Stephon Marbury and traded him for Allen. And if Steph puts up huge numbers droppin’ dimes to KG in Minnesota while Allen struggles—things could get ugly.

That’s how it is in the Show. On the net level, one thing’s for certain: he’ll be expected to contribute today. Just like at Hillcrest High School in Dalzell, SC, just like at UConn, just like fatherhood and with his entire family watching—Ray will be christened “the man.”  But you know what? He’s ready. Let Tierra tell it:

“Daddy will be just fine.”