The 2015 NBA All-Star rosters are set, and all of the players headed to New York for the game have played a huge role for their fantasy owners. Fantasy hoops, however, is a different animal compared to the real game settled on the hardwood.

Box scores and individual performances matter more than team wins or losses, and there are plenty of players who deserve to be recognized for their top-level performance in fantasy land, even if they won’t be playing in New York City next weekend.

Korver has been delivering the “Hot Sauce” at an unprecedented rate this year, with a 54 percent success rate from three-point land. On top of that, he’s hitting 3 of them per game, and is shooting over 90 percent at the free-throw line, which makes him extremely valuable in all standard leagues where those statistics matter. He has been a huge part of the Atlanta Hawks’ success, and will at least be represented by participating in the three-point contest, an event he somehow has not won yet in his career.

Drummond may be young and he may be playing for a Pistons squad that has a pretty bad roster, but he is a fantastic fantasy option despite his early season struggles and free-throw troubles. He’s pushing 13 points, 13 boards and 2 blocks per game, and his field-goal percentage in the last couple months is well over 50 percent. The 21-year-old is a lock for some appearances in future All-star games and will only get better as he gains more experience.

Since the Pistons’ banishing of Josh Smith, Monroe has been playing at a true All-Star level and deserves the recognition for it. In January and February, he is averaging close to 17 points and 12.5 rebounds per game, along with 53 percent from the field and 79 percent from the line. He’s going to get his max contract this offseason, and the Pistons would be fools to let him go. The only thing holding him back from elite status is his lack of blocked shots. Those fantasy owners who saw this coming when Smith was waived are likely reaping the rewards.

The surprising center hasn’t had a long enough stretch to even be considered for the real All-Star game, but it could be in his future and he has turned himself into an elite fantasy option in the blink of an eye. Those who snagged him out of the free-agent pool must be feeling pretty good. The gaudy block and rebound totals have been supplemented by decent scoring, and it’s possible Whiteside could actually be counted on to carry your fantasy team down the stretch. 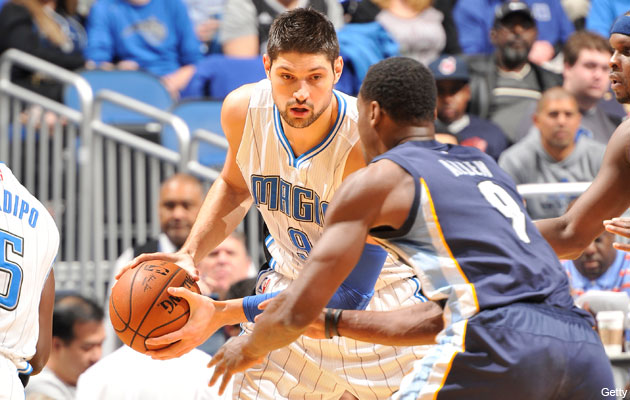 How is this guy not going to New York for the All-Star game? It has nothing to do with his play on the court, and everything to do with him playing on an Orlando Magic squad that is invisible to NBA fans. His current averages of 19.6 points and 11.3 rebounds per game, and his strong shooting percentage, make him one of the most underrated players in the game. That rebounding total is good for seventh in the NBA, by the way. It’s great to see a player like Paul Millsap, habitually underrated and unnoticed, make his second All-Star team this year, and it wouldn’t be surprising for Vucevic to take as long to make the squad as Millsap.

He’s missed some time with injury, but when he’s been on the court he has been as solid as ever. Overall, his numbers are slightly down from last year’s 21.8 points and 10.8 rebounds per contest, which has as much to do with the turmoil swirling around the Hornets’ inability to meet expectations, as it does with his injuries. Don’t be surprised to see Jefferson really turn it down in the season’s final stretch, just in time for the fantasy playoffs. Owners will be happy they have stuck with him.

Before he was knocked out of the lineup with a knee injury recently, Walker had appeared to turn a corner. From December 3 to January 14, he averaged an eye opening 23.4 points, 5.1 assists. and 1.4 assists per game on 43 percent from the field. Kemba should be back in time for the fantasy playoffs, but it might be unreasonable to expect him to continue the torrid pace he had discovered before opting for the minor surgery. Next year, it’s very possible that he will be undervalued in drafts due to early season struggles and the injury, so don’t forget about the promise he showed during this winter stretch.

Stay tuned next week for the Western Conference Fantasy All-Stars.