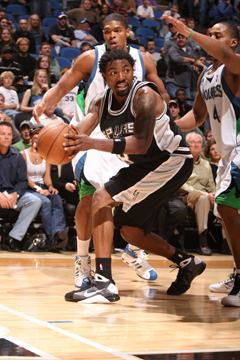 Players should have double-taped their ankles before Friday night’s games. Ankles were getting clipped all over the NBA as we saw Tony Parker, Josh Smith, Devin Harris, and Tim Thomas all fall victim to basketball’s most annoying injury.

Deron Williams owners everywhere are co-signing, as it appears the original two-week diagnosis on his ankle was extremely optimistic. Deron still isn’t practicing at full speed, and with the Jazz off to a 5-1 start, there’s no reason to rush him back.

It’s hard to knock Jerry Sloan for bringing his franchise player along carefully, unless you spent your first round draft pick on him and are suffering through the first two weeks of the season. It looks like the worst-case scenario is that he will miss the upcoming five-game road trip, but should be back at 100 percent after that.

If you own Deron and need some relief at the point guard slot, look to the waiver wire for some supplemental support until he’s suited up again. Guys like Luke Ridnour, Sebastian Telfair, Aaron Brooks, and Roger Mason are all excellent stop-gap solutions, and might even have long-term value.

Tony Parker really shouldn’t play with his fantasy owners’ emotions like he did this past week. On Thursday night, he joined Oscar Robertson and Michael Jordan as the only other players to post 55 points and 10 assists in a game, and followed that up on Friday by rolling his ankle on his way to the cup. He’s going to miss at least two weeks; savvy owners should jump on waiver wire point guards ASAP (see the above suggestions for Deron Williams).

Has there ever been a coach in professional sports as erratic as Don Nelson? I’ll never knock his strategic genius; when it comes to X’s and O’s, he’s a guru. Bottom line though, the man isn’t all there.

After spending two days praising Brandan Wright, and anointing him the man in the Bay Area, Nelson went out on Friday and split his minutes at power forward with rarely used rookie Anthony Randolph.

Is there any logic to that move? The team traded Jason Richardson for Wright, but Nelly refuses to develop him. It seems like a flawed way to coach a franchise, but they must know something I don’t, because Nelson was recently extended.

Al Harrington has now asked for a trade, and it looks like the Warriors are going to accommodate that request. He’s out indefinitely with a phantom back injury, and I wouldn’t be surprised if he never plays another minute in a Warriors uniform.

Under normal circumstances, this would make Brandan Wright a must-add, but again, he’s being coached by Don Nelson so the situation is totally up in the air. I still added Wright in a bunch of the leagues, but it will take some patience to see how this shakes up.

If you didn’t get a chance to read my breakdown of the monster Iverson/Billups swap on Friday, check that out here. In that column, I took a look at all affected parties in the deal, and ended the article with some waiver wire candidates. Speaking of which, here are this week’s selections:

Roger Mason – He’s been putting up some big numbers this season, and now that Tony Parker’s out, he’s a must add in all formats. Definitely the best waiver-wire addition

Brandan Wright – If you have a need for blocks, he’ll be a good option for you, but Nelly has to go along for him to be a long-term fantasy starter.

Kyle Lowry – The Conley/Lowry battle hurts the value of both players. Right now I would rather own Lowry, but you’ve got to assume this situation will work itself out whether by trade or injury. Stay tuned.

Jeff Foster – With Rasho out, Foster will be a nice source of rebounds. He even chipped in 12 points on Saturday night. If you need help on the glass, give him some run.

Wilson Chandler – He’s in the starting lineup and reminds me of a homeless man’s Shawn Marion. I like Chandler’s potential as a Knicks fan, and he should be owned in all leagues.

Kevin Love – I’ve made a personal promise not to play off the man’s last name at any point this season, so I can’t say something like, “What’s not to Love?” Anyway, he’s starting, and should be picked up right away.

D.J. Augustin – I wouldn’t add Augustin, especially with all the other options available, but monitor his performance and minutes in deep leagues.

George Hill – He will likely start at the point in San Antonio while T.P. is out. If you need a point guard and have someone to drop, snatch him up. If not, wait and see how he performs and then make a move.

JaVale McGee – The youngster looked good Friday against the Knicks, but his playing time will be sporadic. He’s going to block shots, but the other categories will be slow to develop. Keep your eye on him, or add him in deep leagues.

Larry Hughes – He may return this week to further complicate things in the Chicago backcourt. Kirk’s injury will clear up some space, and it’s possible Hughes will get a lot of minutes because of the size advantage he offers over Rose and Gordon. If you have a roster spot, add him and see what happens.

Sebastian Telfair – He won the starting job in Minnesota and has performed well this year. I think he has a lot of potential for a big season. He’s not going to be the star we all had him pegged as, but he’s a solid basketball player who can really push the tempo of that young team.

Marquis Daniels — There’s no timetable for a Dunleavy return, and Daniels has been more than serviceable as his replacement. He shouldn’t be available on wires any more, but check and make sure.

I was traveling last week so I was a little slow with your questions, I will be much better this go’round. Thanks for reading, and stay on top of that wire!