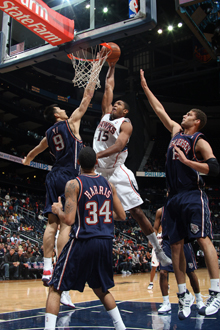 In last week’s column, I predicted Deron Williams would miss the Jazz’s upcoming 5-game road trip because of continued soreness in his sprained ankle. But Williams made me look foolish on Tues. and Wed., playing in back-to-back games; however, his ankle continued to bother him, and he sat out on Friday and Saturday.

Although the swelling is now under control, Williams isn’t able to cut off the ankle at game speed. Frustrated owners should take solace in the fact that there wasn’t a relapse in the healing; apparently, he realized he came back too soon, and the Jazz decided Williams needed more rest. He should be back in the lineup at some point this week.

I’m sure Williams’s owners are frustrated with the situation, and even though it’s not wise to trade a player when you’re selling low, now may be a good time to float offers for Williams. The debate over Chris Paul and Williams is dead–especially when it comes to fantasy production–but the latter is still the second best player at a hard to fill position.

Capturing a moment to buy low in a fantasy league can be a tremendous boost for your roster, and it’s also an amazing way to piss off other guys. Impatient owners who drafted guys like Williams, Dirk Nowitzki, Elton Brand, Andre Iguodala and Al Horford may be enticed into selling low for a poo-poo platter of mid-level talent.

Certainly the veteran fantasy play is to hold onto these guys and remember why you drafted them in the first place. In the case of Williams, he suffered a nasty ankle sprain and his DNPs are frustrating, but is trading him for Devin Harris and Marvin Williams really the solution?

Dirk got off to a slow start last season as well, and though things look (Memphis) bleak in big D right now, Dirk is a former MVP and his numbers are going to recover.

As for Elton Brand, he just needs some time to get acclimated to a new system. He’s a very good player but tends to be too unselfish. At least his blocks have been there this year.

Andre Iguodala and Al Horford are the most worrisome from this group. Iguodala has shifted to the two slot and looks like he’s never dribbled a basketball in his life. I still love his ability to fill the stat-sheet, but I also feel he’s better suited for the small forward position. Fortunately, he’s been better lately after a miserable jump off.

Horford absolutely blew up Tuesday night, posting 27 points, 17 boards and 6 blocks–the kind of line that triggers fantasy wet dreams. However, we’ll label him a tease because he followed that up with a total of 23 points and 20 rebounds in three games combined! His blocks have been there all season but a lot of owners reached on Horford in their drafts. I would wait until he has another monster line and look to deal him.

Condolences to anyone that was squared off against Dwight Howard this past week. I’m sure you’re aware of the damage he inflicted against the Thunder, but tell me how you bounce back after 30 points, 19 rebounds and 10 blocked shots? Although Johan Petro and Nick Collison are his elders, he’ll refer to them as son from now on. I’m the first guy to knock Howard for his piss poor free throw shooting and his love of the turnover, but obviously he’s an elite fantasy player and a force to be reckoned with.

Did you catch Craig Sager throwing up the quotation marks when he referred to Al Harrington’s phantom back injury on Thursday? Sager was definitely making light of the situation, and also said Harrington is working out on his own while seeking a second opinion on the situation. That basically translates into staying in shape while the Warriors look for potential suitors. If you have him on your roster, hold onto him and hope they find a deal sooner rather than later. It’s a tough situation to deal with, but don’t drop him, you’re going to be twice as angry when he’s immediately scooped up on waivers and producing for someone else.

Speaking of waivers, it’s time for this week’s waiver wire pickups.  We’ve got two solid additions in the hard-to-fill center slot, as well as more potential heartbreaks from our nemesis, Don Nelson.

Shane Battier — If there was a draft for NBA players with excellent posture and tea party etiquette, Battier would be the LeBron James of the league. Joking aside, he’s a terrific team player and has a chance to start for Houston when he returns. Keep him on your radar, or stash him in deep leagues.

Brandan Wright — I’ve given up trying to figure out Nelly’s rotations. I don’t own any Warriors in any leagues and will do my best not to. He was a DNP-CD on Saturday and can be cut in all formats. At this point I really believe Nelly is involved in some sort of prop bet with Wright’s minutes.

JaVale McGee — Juan Dixon may have had a few in him when he said there was no reason McGee couldn’t be the next Dwight Howard, but the kid can play. His minutes are more consistent and he’s more comfortable each game. The Wizards frontline is banged up and McGee is a great source for blocks and rebounds.

Gerald Green — The potential is there but things are hectic in Dallas right now. Instead of picking up Green, monitor his production and look for consistency before making any moves.

Luc Richard Mbah a Moute — This man is the reason Charlie Villanueva is disappointing again this season. He looks like the real deal and Stiles certainly has a man crush on him.

Anderson Varejao — The bell may have sounded officially on the “Ben Wallace as a NBA contributor” era. His ineffectiveness has opened the door for Sideshow Bob’s increased fantasy production.

Andrea Bargnani — He’s suddenly starting over Jamario Moon and should be picked up in all formats. I’m a believer in Bargnani and have added him where I

can. It takes a bit of patience because he’s so up and down, but he’s always a nice source of blocks and threes with Jay Bilas-style upside.

Anthony Morrow — Scoring 37 points in your first NBA start would normally be the type of news to make a guy a “run don’t walk” pickup. Kudos to Morrow, but unfortunately he’s coached by the fantasy player hater, Don Nelson. Add Morrow where available, but don’t cut a good performer to do so because he’s coached by Nelly.

Flip Murray — He’s been great off the bench this season for Atlanta, and is a good add in deep leagues, or where you need scoring.

Larry Hughes — He’s active again and should be monitored in all formats. Don’t run out and add Hughes immediately because Gordon and Rose are playing so well, and Sefolosha is still there to suck the minutes out of the room.

Thanks for reading. Leave your questions in the comments section, and I will get back at you ASAP!