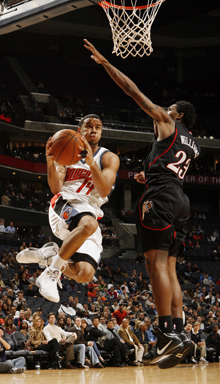 First off, I apologize for the delayed release of the fantasy column this week. Thanksgiving is almost upon us, and you know how the holiday seasons go. My schedule has been as foolish as one of Don Nelson’s rotations.

The Knicks jumped out to a quick start this season, climbing above .500 for the first time in what seemed like a decade. The sudden high-energy team was paced by the outstanding play of Zach Randolph and the sharp shooting of Jamal Crawford.

With Donnie Walsh’s native New York eyes fixed on the free agent summer of 2010, the Knicks turned around and dealt both Randolph and Crawford this past Friday in separate deals.

Though the move was clearly a box-out for position in arguably the best free-agent crop of all time, its fantasy implications will be felt immediately. Here we go:

The New York Knicks — Tim Thomas and Cuttino Mobley were previously only useful in abysmally plain fantasy leagues, but now should be on everyone’s radar.

Cuttino Mobley’s situation is complicated by the rumors that he failed his physical due to a heart condition [Insert Eddy Curry reference here]. If you are already holding Mobley, wait and see how this develops because he can hit the deep three and will see a lot of tick in D’Antoni’s system. Assuming, of course, he is actually medically cleared to participate.

Tim Thomas flourished in Phoenix for half a season under D’Antoni and should be an intricate part of the rotation for the undermanned Knicks. In his first game he scored 16 points, grabbed six rebounds and added four assists. Thomas’ value is always difficult to judge, but if he’s motivated to perform (read: needs a new contract), he will be an excellent addition in deeper leagues.

Al Harrington is Donnie Walsh’s mans and them, and he has the versatility to excel in an up-tempo situation. He should get plenty of minutes in New York, and I expect his value to be above what it was in Golden State, based mainly on the opportunity to get his in the Garden. Obviously, if he was dropped by an impatient owner, snatch him up immediately and look to buy low right away. It will take him a while to get acclimated to a new system, and shake off the rust from sitting out, but he is going to produce.

Jamal Crawford — He’s expected to run the point in Golden State which will benefit his assist totals. It’s always a dice game with Don Nelson’s rotations, but hopefully Crawford finds a niche as one of “Nellie’s Guys” and flourishes in his role. I think his scoring will dip a bit, but his field goal percentage and assist totals will increase. The plot thickens when Monta Ellis returns, but for now Crawford should continue to produce for fantasy owners.

Zach Randolph — I’m still confused why a team that already had Marcus Camby and Chris Kaveman would make this move, but that’s par for the course for the Clippers. You have to wonder where Randolph’s minutes will come from, but at the same time, why make the move if you’re not going to give a player that clearly needs a lot of shots the minutes to produce? There’s no doubt Baron Davis has the ability to get Z-Bo the ball where he likes it, but I still expect his numbers to dip in L.A. If you’re still able to sell high on Randolph, now would be an excellent time to do so.

Manu Ginobili made his season debut with the Spurs much earlier than anticipated, scoring 11 points in 12 minutes Monday night. The original prognosis on his ankle had him out much longer, and that’s great news for anyone who drafted Manu in the mid-rounds. There’s no reason to go into what he brings to the court, because the man is a stud, but guys like George Mason and Michael Finley could see a drop in production but maintain their value at least until Tony Parker returns to the lineup.

Even during the holidays, the waiver wire never nods off. There’s a lot of action right now, and a lot of potential keepers floating around:

Andrea Bargnani — He’s in the starting lineup and is coming off his best week as a NBA player. He should no longer be available in any leagues and will provide points, rebounds, blocks and three balls to owners fortunate enough to have

snagged him (which could have been you, if you listened to my advice last week!).

D.J. Augustin — Here’s another guy who should be scooped up in 12-team leagues right away. He’s starting, and Larry Brown is bullish on the rookie. There are also trade rumors speculating that Jason Richardson will get sent out of town, which would free up even more clock for Augustin. Even if that falls through, I wouldn’t be surprised to see Felton moved at some point this season. Augustin looks like the real deal and an excellent pickup.

Ramon Sessions — Luke Ridnour is once again banged up and Sessions is starting at the one-slot. If you need a point guard and Augustin isn’t available, Sessions is a nice addition.

Eric Gordon — Now that Mobley is out of town, Gordon will see increased playing time and shots. Don’t rush to pick him up, but if he has a good game, expect him to be added in a lot of leagues.

Brook Lopez — Josh Boone’s injury has extended his playing time, and he’s performed well enough to keep the starting job. The Nets are focused on the future and while both Boone and Lopez have talent, it makes more sense to give the starting job to Brook right away. Center is the rarest position in fantasy, and though Lopez will be inconsistent he’s worth an addition in most leagues.

Quentin Richardson — He’s had a solid year so far in New York, and the trades and injuries are going to open up a ton of playing time and a lot of headband patting. He’s always inconsistent but will get enough minutes to start and produce in most leagues.

Andray Blatche – Blatche exploded last night for 25 points, 12 rebounds and 5 blocks. The issue with Blatche has always been playing time and his comfort level under Eddie Jordan. This was the team’s first game playing for interim coach Ed Tapscott. A performance like that, even one game, warrants an addition in all leagues. Go get ’em!