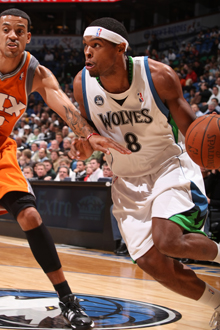 After dropping a fantasy column on Wednesday of last week, I’m back on short rest with this week’s column.

If you’ve followed my column over the years, you’ll know that I like to share links to websites and tools that I utilize week to week. There’s no hidden motivation in these plugs, just looking to share some sites I think SLAM readers should be aware of.

This brings me to Basketballmonster.com. The site is a fantastic resource for ranking and evaluating performance and trade opportunities. What separates the rankings on this site from the standard rankings in Yahoo or ESPN leagues are that you’re able to customize them for your league’s setup.

For example, I’m in a league where we count offensive rebounds as a category. This dramatically alters a player’s value, and accounting for that when analyzing a deal is crucial. Though I

occasionally find errors in the stats, overall they do a fantastic job and it’s certainly worth checking out when evaluating a move.

Outside of injuries, is there anything worse than owning a star player on a dominant team? Anyone who owns starters on either the Lakers or the Celtics knows exactly what I’m talking about. The spoils of easy victories aren’t felt throughout fantasy circles. In fact, blowouts in general are just about the worst thing that can happen to starters’ stat lines. Unfortunately, there’s no remedy for this situation. If you’re truly fed up and looking to deal one of your affected studs, wait for a few husky stat lines and make your move when you’re able to sell high. I don’t know of any leagues that credit the number of fourth quarters sat as a positive statistic; Kobe Bryant owners stand up.

The Mike Dunleavy Jr. saga is growing old, fast. The updates out of Indiana have been scarce, and what was once reported as a minor injury now appears to be anything but. The truly frustrating element to all of this is that the lack of information doesn’t allow owners to make a clean break from Dun Jr. There’s nothing worse than cutting ties with a potential fantasy beast, only to hear he’s expected back on the court within the week. It seems the only thing owners can hope for is a clear report on his status and, hopefully, good news on the return.

Before Stephon Marbury met with Donnie Walsh this afternoon, this is what I wrote about the meeting:

Whether it ends in a buyout, dismissal, or no action is taken, the Stephon Marbury saga should be resolved on Monday. The word on the curb all year has been that Steph is in the best shape of his career. If the two sides are able to reach a buyout agreement, his questionable mental state aside, someone’s going to give Stephon a chance with their club.

Career averages of 19 points and 8 assists were all the motivation I needed to add him in whatever leagues I could. Any owners with a flexible roster spot in a 12 team should give heavy consideration to making the move. If it doesn’t work out, you can always drop him and move on. The risk-reward factor makes it a very intriguing play.

We now know that the two sides weren’t able to agree on a deal, and Steph has been sent home to collect his millions on his on time. It’s not bad work if you can get it, but it does come with a label of league pariah attached to it. I have already dropped Marbury, replacing him with Ryan Gomes in a 12-team league.

After releasing last week’s column on Wednesday, I don’t have too many waiver gems this week. Still, there are some players making the most of injuries and playing time

Luther Head and Aaron Brooks — Tracy McGrady’s knee is giving him serious problems (shocker) and there’s talk he might shut it down for an extended period of time. If this occurs, there will be plenty of minutes available for Head and Brooks. Head’s size allows him to better plug in for McGrady, but certainly both guys would benefit. Keep an eye on TMac’s status and pounce if he’s going to miss time.

Chris Wilcox — Wilcox is healthy and starting at the five-spot for the Thunder. His natural position is power forward, and he’s extremely injury prone, but he should be a solid source of points and rebounds for owners in need of frontline support.

Francisco Garcia — He’s back on the court for Sac-Town after missing the start of the season with a calf injury. He played well last season when Ron Artest was out of the lineup, and when he gets his legs back he’ll be solid this year as well. It will take him some time to adjust so you’ll need to be patient when adding him.

Russell Westbrook — It appears Westbrook has won the starting point guard job in OKC, and he should now be owned in all leagues. As a rookie, he will be up and down this season, but he can really fill the stat sheet and should see plenty of tick for the youngins in Oklahoma City.

The New York Knicks — Outside of Anthony Robertson, everyone on this roster is getting picked up. The Knicks have been dressing seven players in the wake of the Cuttino Mobley physical, and Nate Robinson’s groin injury. The intramural-size roster is providing plenty of opportunity for guys like Chris Duhon, Tim Thomas, and Wilson Chandler to put up big numbers. Duhon and Chandler should be owned in all leagues, and Thomas will be solid as well.

Anthony Johnson — As long as Jameer Nelson is injured, Johnson is worth owning. The man they call “Dad” can get it done and it an excellent add/drop replacement at

Ryan Gomes — Gomes has been playing well lately, hitting double figures in six of his last eight games. Corey Brewer is now done for the season which will mean more tick for Gomes and increased production. He’s a fairly balanced player who can help owners in a number of categories.

C.J. Miles — He’s been an excellent fill-in for the injury depleted Jazz. His recent value may plummet when the team returns to full strength, but right now he’s scoring, knocking down the occasional three, rebounding and diming at a strong clip. He deserves a strong look in 12+ team leagues.

As always, thanks for reading. Leave your questions in the comments and I will get back to you ASAP. If you have a question regarding an add/drop or a trade, try to let me know how many teams are in your league in your post. A lot of potential developments this week–stay close to the wire!