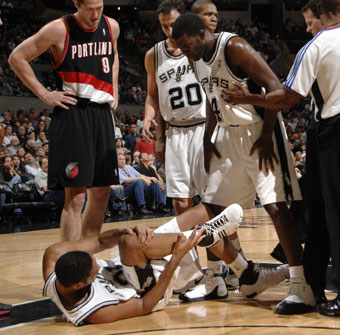 Who could have predicted the second quarter of yet another Spurs blowout could be so potentially costly to the franchise?

Tim Duncan went down with what appeared to be a serious knee injury after getting tangled up on the block with Portland’s James Jones in the second quarter on Sunday. If there’s a short list of superstars with the ability to absolutely hush an arena when they go down clutching a body part, Duncan’s name is on it, in bold permanent marker.

The good news for the Spurs, and fantasy owners is that #21 seems to have escaped serious injury. The team doctors are calling it a, “bruised right knee, and a sprained ankle”, but are still awaiting the final word on the MRI.

The Spurs hit the hardwood twice in week #6, and my guess is that Timmy will sit out both games. No reason to risk another ring right? In the very short term, take a look at Fabricio Oberto and Francisco Elson, who will benefit from Duncan’s time off.

Last season Jerry Sloan must’ve had Ice Cube’s, “Today was a Good Day” on heavy rotation. The Jazz put together 51 wins, including a trip to the Western Conference finals and Sloan “didn’t even have to use the A.K.” in doing so.

As a result of last seasons drop-off, and a preseason trade request, Andrei Kirilenko’s fantasy value took a major hit in drafts of all formats. Even after leading his national team to the European championship this summer, there was no way to predict how he would approach another season with the Jazz. The result was a major dip in draft stock and Andrei was routinely being given away in the 4th, 5th, 6th and even 7th round.

Turns out, things are working fine in Utah and the A.K. is once again a major part of the attack. With Carlos Boozer and Mehmut Okur out on Friday night, Andrei blew up for 20 points, 11 rebounds, 11 assists, six steals and four blocks. His offense may never return to where it was before Boozer took over the block, but he’s so versatile he makes up for it in other ways. Props to everyone with the foresight to predict the re-emergence of Andrei this year. No doubt your league is suffering as a result.

The waiver wire is sort of like a department store that was recently looted, not much value left. The guys I have for you this week will provide production, but most are niche players looking to fill a role. When the gem of your waiver selections is Sebastian Telfair, you know hard times are upon you.

Sebastian Telfair – There’s a Bassy sighting on the waiver wire, wow! Injuries are something aren’t they? With Foye and Jaric sidelined the job is Telfair’s by default. Saturday night he got the start and dropped 16 points, 7 boards, 6 assists and 2 steals. Telfair may not be the real deal, but given minutes, he will produce.

Steve Francis – After a promising start to the week I thought this was going to be the column I could finally recommend picking up the former Franchise. Rick Adelman was giving him some increased burn and Steve was responding. Fast forward to Saturday’s DNP-CD and it’s just the latest example while owners should avoid the the Houston back court at all costs.

Brandon Bass – Bass has continued to get tick down in Dallas and while he isn’t the best option for owners operating in smaller leagues, Bass’s PT should only increase with experience. If you’re in a deep league, keep your on him.

Brendan Haywood – His hot start faded after Andray Blatche‘s name started to ring out but if he was hastily dropped in your league, pick him up. Haywood is the only true center the Wizards have on their roster and while Blatche is more talented, I predict Haywood will emerge from this time-share as the more valuable player.

Kurt Thomas – He was starting before Nick Collison broke his nose so he should retain value even after Collison’s return. If you need a second or third center, Thomas is a great option for rebounds and blocks.

For the upcoming week everyone plays three or four games except the Spurs, Pacers and Magic, who only play twice.

Sorry to cut the column short this week but I am traveling today and have to hit the road. If you’re looking for a gem off the waiver wire and didn’t find what you’re looking for here, keep your eyes open this week, things can’t stay this quiet for long.