Fantasy Week 11: Step Up or Step Off 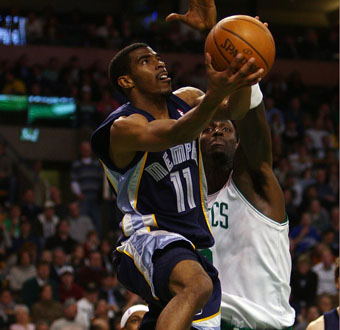 I was watching one of those nostalgic Michael Jordan videos the other day, I think it was “Above and Beyond,” and couldn’t help thinking about fantasy basketball.

I’ve touched on this in an earlier column, but clearly fantasy hoops wasn’t what it is today in the mid-nineties. But for a minute let’s suppose it was; can you imagine the rush to the waiver wire when Jordan faxed that message that simple stated, “I’m Back” to the Chicago front office? Wouldn’t that have to rank as the greatest fantasy pickup of all time? Michael Jordan? You kidding me? Would Yahoo even have had him available?

You know that burnt feeling you get when a guy in your league snatches from you off the wire? It’s one thing if it’s Randy Foye; quite another to login and read: Added Michael Jordan, dropped Walt Williams. That one I wouldn’t get over by lunchtime.

It appears Ben Osborne and Kyle Lowry are going to have to part ways. Mike Conley is suddenly entrenched in the starting lineup for the Grizzlies and the young fella is producing in ways that should solidify him as the starter in Memphis.

I realize Conley is likely the future of the franchise and he was a top 5 pick in a loaded draft, but memo to Grizz coach Iavaroni, let Kyle Lowry live a little! As soon as Conley was healthy he straight snatched the starting gig. Old man Stoudamire isn’t feeling the situation and has asked for a ticket out of town. Keep your eye on where he ends up, the right situation could yield some value.

As for Lowry, unless you’re in an extremely deep league (16+ owners) it’s time to adios. The talent is there but the tick isn’t, and as we covered before, the NBA is all about opportunity (elsewhere Jamario Moon pours something out). But between Navarro, Lowry and Stoudamire the backcourt in Memphis is no place for fantasy owners to hold stock.

If you slept on last week’s column now may be your last chance to pick up Randy Foye. He had his knee checkout yesterday and the reports showed considerable improvement from a month ago. This means Foye will upgrade his light workouts and get into full contact drills in a week or so. The young ‘Nova product is itching to go and I would expect him back in action by months end. As for extended value, it’s tough to say. I’m holding onto him and expect him to slide right into the starting point guard slot much the way Conley did in Memphis, only with a firmer grip. Keep in mind that his running mates are Marko Jaric and Bassy Telfair. No disrespect to those two, but when inconsistency is your most consistent attribute, I won’t be sad to see your fantasy candle burn out.

How down is everyone on Shaquille O’Neal this season? I know the big fella is a shadow of his former self, but people are hating! His numbers this year are roughly 14 points, 8 boards, and nearly 2 blocks a night, better than you thought right? I know his free throw shooting is atrocious, and yes, I have attempted to trade him in every league I own him in, but people are just killing The Diesel these days.

To be fair, this latest injury does have me a little concerned. Shaq left the Heat on Monday to see a specialist for his hip injury and there’s no timetable for his return. That sounds to me like one of Shaq’s prolonged injury scenarios that go on until playoff time. Only issue is this year the Heat need to win now to even stay in the playoff picture, so he has some extra incentive to return to form. Fantasy owners need to get a sense of his value in individual leagues and try to make a trade happen. Sell the fact that the Heat have a banged up front line and Shaq has no choice but to put up numbers when he returns. You might also want to throw in the fact that hip injuries have historically corrected free throw shooting woes and weight problems, when in reality it’s likely to contribute to both.

All joking aside, I know everybody is pulling for T.J. Ford’s speedy recovery. Unfortunately for Ford the nature of his injury isn’t a break or a bruise, but one of the career threatening nature. Ford has yet to see the floor since getting railed by Al Horford in a game on December 11th where he was putting in ridiculous amounts of work against the Hawks. Owners, if you’ve held Ford this long, stay with him and if he’s available, pick him up.

For Gilbert Arenas owners things aren’t looking good. If you haven’t heard Arenas announced via his blog, that his rehab is coming along well but he’s in no rush to come back on the court. He’s impressed with his team’s play and said that rushing back for 15 or so games were not worth the risks. Although he seems to be correct, this isn’t the news fantasy owners want to hear. The call here is a tough one to make and boils down to positioning. If you’re atop the standings and could use that extra push when he returns then it’s smart to hold tight. If you’re scraping for position and need some help from the Wire, a drop makes a lot of sense. It’s never a good feeling to see your first-round draft pick helping a competitor’s squad but if it’s the difference between a playoff slot and missing out, well then, you already know. However, just so I’m not accused of dodging the question, in most cases, I’m recommending you part ways with Agent Zero. No NBA Live cover jinx my ass.

The waiver wire is so thin this week it would make Shawn Bradley look husky. The only guys I’m recommending adding are Anthony Carter and Tim Thomas. Carter should be looked at in deep leagues where owners need assists and some help with points. I can’t be high on Carter, even after dropping 15 dimes on Sunday because Chucky Atkins could come to life any minute and disrupt his value.

Thomas on the other hand was likely dropped after missing time and will contribute by default for the banged up Clippers. Al Thornton failed to step up in his absence and the three-point shooting, hand-waving forward will be back in action this week. As much as I despise Thomas’s lack of effort at times on the court, he is still very talented and will help fantasy teams in all formats.

Pat Riley announced recently that D. Wade’s shoulder injuries last season were more serious than the team led us to believe. He said Wade experienced tears in his tendons and obviously knowing what we know now, bringing him back was a disaster. This season Wade has continued to play through pain and came back early from injury. It’s not working out. Fantasy owners need to be very careful with this one. If you own Wade, I would try to move him ASAP. If the Heat continue to tank, Wade, or the Heat, may elect to shut his season down instead of risking further disaster.

Alright guys, that’s all for this week. I should point out that I was going to add Kwame Brown to the waiver list for potential pickups but my computer threatened to shut down and delete the column. All told. Talk to you next week.