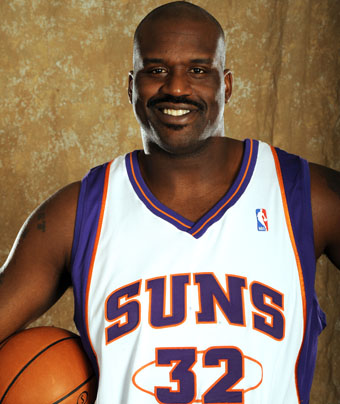 I made a return trip to Temple University for some pickup runs last Tuesday, and after the games finished up, I was getting set to make my way back downtown.

Before I headed out, I checked my phone and had a text message from a Miami fan. It read: “Shaq traded to PHX for Marion.” The message also contained far more smiley faces then any text should ever include.

Rolling my eyes at the absurdity of the thought, I replied “LOL” and headed home.

Being the gangsta that I am, I spent the evening watching Juno with my girlfriend and steered clear of the computer and NBA Fast Break. By the time I was back on the computer, O’Neal was off to Phoenix and the trade was a done deal, pending a physical.

Like everyone else, the trade took me by surprise and I immediately assumed Kerr and D’Antoni were victims of extortion by the hands of Pat Riley – I’m still not 100% convinced this isn’t the case. While I understand the theory behind adding Papa Diesel to the Suns, I think a guy like AK-47 would have been a much more intriguing addition, and they will miss Marion’s versatility, on the defensive end especially.

However, this is a fantasy column so let me stop getting my Mark Stein on and jump into the impact these players will have on their new teams.

Shawn Marion – It likely took the Miami Heat PR staff 15 seconds to come up with a Matrix: Reloaded campaign before they were buying each other rounds for a job well done. Fair enough. I think Marion will hold top 10 fantasy value in Miami but if his numbers don’t tail off a bit with Jason Williams as his point guard, then we’ve all been hoodwinked by Mr. Nash over the years. His rebounds, steals and blocks should stay the same, if not increase, while his field goal and 3-point percentage should take a hit. Slam readers realize Marion was an All-Star before Nash’s arrival, but if you’ve ever laced them up, you understand the beauty of playing alongside a gifted PG – Antonio McDyess and every member of the New Jersey Nets since Kidd’s arrival stand the f–k up!

Marcus Banks – He’s the wild card in this deal because we never got a chance to see what he could do in Phoenix. He’s a big guard with a nice stroke and quick release. He’s a streaky shooter and he likes to squeeze from downtown. That didn’t fly on a championship contender but in Miami that might earn him a starting role. Keep your eye on Banks and if you have an open roster spot to play with, add him and see what he’s got.

Shaquille O’Neal – While watching his press conference I kept waiting for a reporter to ask the one question that needed to be answered: FOR THE LOVE OF GOD, WHAT MEDICAL SECRETS DO THE SUNS TRAINING STAFF KEEP LOCKED IN THE CLOSET? Think about this: They have taken care of Steve Nash’s back, Amare’s knees, Grant Hill’s everything, and now they are confident they can fix the Diesel. I’ve also heard they have a cure for cancer in the works.

If I’m a Miami Heat fan, I’m burnt because Shaq is talking like he’s going to play before the All-Star break, but while in a Miami uniform he was out indefinitely. I understand that winning is the great motivator, but a 20-million dollar salary should also play a part or at least bear responsibility.

A motivated O’Neal could mean a return to fantasy value. If he was dropped in your league he’s worth picking up just to see what he’s going to bring to the 5 spot. If you own Shaq you’re going to be punting free throws and turnovers each week, and he also likes to sprinkle in the occasional DNP. But if he has a point to prove, he’ll be ready to help your team.

Ron Artest got loose with the media this week letting reporters know he feels it would be in the Kings’ best interest to trade him. Right or wrong, Ron has opened the door for a return to value for John Salmons. Also keep Beno Udrih in mind, in case the Kings make a move involving Mike Bibby. In either scenario, Francisco Garcia would also see a bump in value.

With the NBA trade deadline fast approaching I want to go over a few tips to assist owners in getting the better half of a fantasy deal:

Don’t be that dude just slinging junk offers around the league hoping something will stick. Let’s call him the Isiah Thomas of fantasy leagues; every league has at least one. There’s nothing worse than getting an email alert saying that a trade offer has been proposed, and its two guys he just plucked off the waiver wire and a mid-tier player for two of your studs. Even if an owner was foolish enough to accept such an offer, it’s likely to be vetoed by the league or the commissioner. Once you get a reputation for bozo trade offers, your credibility is a wrap and even completing even swaps will become difficult.

Be easy with the veto button. I’m not saying that lopsided deals should go down when they could potentially butcher a league, but don’t hate on a crafty owner’s ability to pull a good trade. The whole point of making trades is to help your team and there are going to be winners and losers in every deal.

Earlier this year a horrific trade went down in one of my extremely competitive leagues. Chris Paul and Jason Richardson went for Rasheed Wallace, Nick Collison, and Ron Artest (see my next tip). Clearly this trade favored the side receiving Paul and Richardson, but should it have been vetoed? I don’t think so. The owner that pulled it off took advantage of the other guys need for size, and he took his shirt. The result: one team shot to second place and the other dropped out of playoff contention. It has also produced hilarious posts and comments when Chris Paul does something like drop 42 points with 8 steals while Nick Collison has 4 points and 2 rebounds.

You should make it a priority to acquire the best player in every trade you put through. Studs like Chris Paul, Josh Smith, and Marcus Camby have enough talent to carry a few categories on any given week. Trading them away for two mid-level talents will not boost your team. Remember, if you do a 2 for 1, the numbers might work out in your favor but the team getting back 1 gets a free roster spot to plug whatever he’s losing in the trade from the waiver wire.

If you have a way of contacting a potential trade partner, hit him or her up. Better to explain your end of the deal to them personally. If you can open up a conversation, you’ll have a better understanding of what needs they’re looking to fill and you can position yourself for a counter offer.

Finally, if you’re in a good position in your fantasy league, don’t start itching to deal just to get new blood on your roster. Results and rankings speak for themselves and dealing to deal is a horrific strategy.

Let’s get into the waiver wire candidates for this week…

Jarret Jack – He’s a big, physical guard and has benefited from increased minutes as of late. His name has been floated in some trade rumors and although I doubt he will go anywhere unless the Blazers are blown away, it appears his role is increasing. Sunday against the Pistons he dished out 9 dimes in the first half. He can score and rebound the ball well at the guard slot and deserves to be added in most formats.

Freddie Jones – Anyone who follows this column knew over a month ago that Steph was done for the season. Well, the news is now official and with Isiah Thomas hesitant to hand the starting job over to Nate Robinson or my man Mardy Collins, Jones seems cemented in the rotation. Similar to Jack, he’s a physical guard who’s able to provide good rebounding at the guard slot. If you’re thinking about dropping Nate, Jones is an excellent replacement.

Charlie Villanueva – Easy Yi goes down, Charlie steps up. Ever since his rookie campaign Villanueva has been able to put up numbers, and with the opportunity to start, he’s excelled. He’s on the trading block, and could be moved by the deadline, so put him on your roster, and hope management continues to showcase him for trade bait. He can score and rebound, adding the occasional three and block to his stat lines – Check for an update on the status of his knee, which he injured 16 minutes into last nights game before adding him.

Gilbert Arenas – If he’s on waivers in your league, make sure to send me an invitation next season. I’m putting his name on here simply as a reminder to double check and make sure he’s owned. He’s going through full workouts now, and plans to be back on the court by the end of the month. Agent Zero was slated to have a big season in this contract year, and he’s definitely got something to prove to fantasy owners who took him with their first pick. Fire up the hibachi, and make mine a double.

Thaddeus Young – Mo “Your team is” Cheeks has finally inserted Young into his starting lineup and the rook is responding. His numbers aren’t spectacular but he’s scoring in double figures, shooting a high percentage and rebounding the ball at a nice clip. He wasn’t seeing the court at the start of the season, so the rookie wall won’t be an issue. He could be a strong play for the rest of the year and should only see his roll increase.

Joakim Noah – Noah should be added only if Ben Wallace is moved out of Chicago. In the event that a trade takes place pick up the young fella ASAP.

Travis Diener – Depending on how attached you are to Jamal Tinsley, you may want to think about dropping him for Diener. Tinsley is out until after the All-Star break and may have lost his starting job for good with the solid play of Travis D. This will be the first time in his career he’s going to get consistent tick, and if he responds well, he might win the job the rest of the way.

Dorrell Wright – I apologize in advance when Wright disappoints owners who’ve added him based on this recommendation, but let me say that I also made the move. I think he’s going to fit in well with Wade and Marion and his athleticism and unselfish play will keep him on the floor. In Marion’s first appearance in a Heat uniform Wright chipped in 15 points, 7 boards and 2 steals and looked very comfortable with the new man. The Ricky Davis experiment has gone horribly wrong (Go figure, he sips!) and I think Riley realizes Wright needs minutes to contribute for a competitive team next season.

I apologize for the super long column this week. All these blockbuster trades and trade talk has me hyped for what may come this season. Any questions, hit the comments section or email me and I will get right back at you. As always, thanks for reading.