Fantasy Week 20: Shut It Down 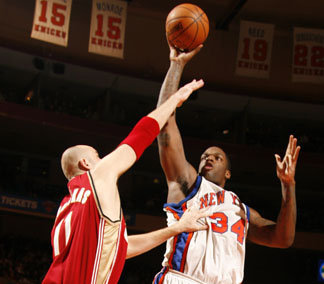 If you read this column every week – I like your style! – you know I’ve been campaigning for a hands off approach to Dwyane Wade since before the season started.

When healthy, Wade is a fantasy stud with top 5 player rating potential. He scores, dimes, boards, and plays defense, while leading his team night in and night out. Outside of Lebron James and Kobe Bryant, Wade is as elite a guard as we have in fantasy leagues.

He represents a resurgence of young talented superstars and remains one of the NBA’s most marketable players. Unquestionably his greatest feature is his toughness, and his willingness to play hurt. (Still feel me)

This is a sought after trait in most fantasy circles, except in situations where a player is rushing back from injury, and his style is trademarked by a reckless abandonment every time he laces them up. (Gerald Wallace, put’ya lighters up!)

Simply put, Wade was never healthy this season. The last few times he’s been out on the court he looked more like Omar hobbling around West Baltimore after he jumped from that 5th story apartment window, then an elite shooting guard.

There’s no room for I told you so in this situation, hopefully you were able to deal Wade for .30 cents on the dollar before news of his shut down surfaced Monday. As I mentioned last week, this makes Ricky Davis and Marcus Banks must-add players and savvy owners should keep their eyes on Jason Williams and Daequan Cook.

Pump those breaks a second… Marcus Banks pulled his hamstring on Saturday night and is likely to miss 2 weeks of action. Davis remains a must-add but look for Daequan Cook to get heavy burn in Bank’s absence. He had 23 points Monday night and clearly has the green light to let’em go.

Common wisdom would indicate that White Chocolate should make the most of this opportunity, but with the season wrapped up and the quest for ping pong balls upon Heat fans, why not develop your young talent on the court?

In much less meaningful news, Knicks center Eddy Curry is also likely done for the season. Curry is of borderline fantasy value but his departure will mean David Lee will see a major boost in minutes and on the off chance he isn’t owned in a shallow league, now’s the time to add him.

Zach Randolph returned to action Monday night and with the block all to himself, expect Z-Bo to start eating on the and off the court.

After predicting he would sit out 3 games with a sore knee Chris Bosh has now been on the shelf for 5 straight games. Word on the curb is that Bosh will also sit out the Raptors upcoming road trip before making his return next Wednesday.

In his absence Anthony Parker, Jamario Moon, and Rasho Nesterovic have all stepped up their production and are playing extremely serviceable basketball for fantasy owners. If any of the preceding players are available in your league, they deserve to be added to your roster, at least until Chris is once again on the floor in Toronto.

Gerald Wallace is slated to return to the hardwood Wednesday for the Bobcats potentially limiting the value of Jared Dudley and/or Matt Carroll. Both Carroll and Dudley gave quick acting owners a boost last week but with Crash returning, someone has to take a production hit.

Fantasy owners can rest assured it wont be Jason Richardson who had a monster week on his way to earning the Eastern Conference player of the week honors. G. Wallace is expected to log minutes at small forward to keep his banging inside to a minimum, but I’ll believe that when I see it. Weakside rebounding and defensive habits don’t die easily. It looks like Carroll will return to a 6th man role with the team but fall back with your move until you see what plays out.

After developing a reputation as an extremely injury prone big fella, Zydrunas Ilgauskas has bounced back to become somewhat of a warrior over the past few years. However, back pain has forced him out for an undisclosed period of time and there’s a chance he might shut down for the year.

In his absence Anderson Varejao has been more than serviceable and should be picked up immediately. I recommended owners add him last week but admit it, you weren’t feeling me until he dropped 15 points, 16 boards, 6 dimes, and 4 steals Saturday night. It’s all good, no hard feelings, hopefully he’s still available to help with your playoff run and should be a great 2nd center option until Z’s return.

Go ahead and queue up that T-Mobile commercial where Barkley is mistaken for Wade’s father by the waitress. Remember when he tells Wade, “You hot right now…” That’s the way I feel every time I get an email from a reader asking about Nelly’s latest lineup shakeup. This go’round it’s Mickael Pietrus getting the love, last week it was B. Wright, who’s now getting hooked up with DNP-CDs.

The bottom line is Nelly doesn’t give a sheeeeit about consistency and sticking to the script and beyond Ellis, Jackson, Davis, and Harrington, no one on that roster can be trusted as long as Nelly is popping bud lights and waiving his clipboard after the game.

If Charlie Villanueva is still sitting on the wire in your league, I’m begging you to pick him up. Yi Jianlian is banged up and Charlie is so hot right now (Zoolander).

Bucks management may be showcasing him for an offseason move but I think that would be giving them too much credit, in any event, he’s scoring and rebounding at a high clip and deserves a spot on your roster.

Nenad Krstic and Spencer Hawes aren’t guys you need to add right away. These are players who qualify at center, and are coming on strong with increased minutes as of late. Krstic has finally got his legs under him after missing significant time earlier in the year and is capable of doing big things if healthy and given minutes.

Hawes is another guy benefiting from his team being out of the playoff race and management wanting him to gain valuable experience with what’s left of the season. There’s upside with both guys and monitoring the progress of these two on a game by game basis might land you a very serviceable backup center.

Franchises heading to the lottery have a tendency to rest stars and showcase their young talent. You could argue that deciding a fantasy championship in the final 3-4 weeks of the NBA season is flawed because many players are shut down or limited in minutes to either, rest for next year, showcase other guys, or get ready for the playoffs.

Don’t even sweat that. I’m going to have my third eye on those trends and I’m going to pluck those guys off the wire for you each week in this column. This is the time of year where add/drop becomes a key element to your strategy, so know how many games a free agent plays in a given week, and save some moves to make things happen.