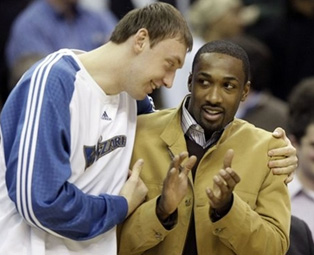 Before I get started on this week’s column I have to take a moment to shout out my alma mater, Temple University, for winning the Atlantic-10 Championship and securing its first bid in the NCAA Tournament since 2001.

The Owls have a legit backcourt led by Dionte Christmas and Mark Tyndale and should prove very dangerous in there 5-12 opening round match up against Michigan State. Go TU!

Fantasy owners banking on Gilbert Arenas’s return to ignite your team’s playoff push, received encouraging news Monday. The results of Arenas’s MRI showed significant improvement and he’s going to increase activity in Tuesdays practice in order to test how the knee responds. Medically speaking the injury is healed, but inflammation and impending free agency have him worried about another failed comeback attempt.

The knees response to a more intense workout will hopefully give owners a clear return date. I expect Arenas to return to the court this season, and while conventional wisdom predicts he will be hesitant upon returning, this is Gilbert Arenas. He gets his. When he decides he’s ready to go, the hibachi is getting fired up and the fantasy production will follow. Keep him benched for now, and monitor the situation closely. If he’s still available in your league, he shouldn’t be.

Shawn Marion’s back has kept him out of the past two games for the Miami Heat and although he said he would try to give it a go tonight, his season may be coming to a close. With Wade already of the shelf and the battle to secure as many ping pong balls as possible underway, I don’t see Marion being super motivated to get back on the floor.

If Marion is going to miss extended time Earl Barron, and Mark Blount should see a boost in value. Udonis Haslem is already banged up, and also may be done for the year, and the Heat are scrapping to put five healthy bodies on the floor.

Between the two, Barron is a better pickup than Blount simply because he will fill the rebounds and blocks category more effectively.

Ronny Turiaf has slid into the Lakers starting five after Pau Gasol suffered an ankle injury last week. Turiaf is extremely serviceable off the bench but with Bynum and Pau laid up, he’s going to get over 30 minutes a night for the next couple games. He’s the perfect example of an add/drop player as his value will run its course as soon as Pau returns to the lineup, in the meantime he’s an excellent short term add.

While nothing has been officially announced regarding Chris Kaveman shutting it down for the season, that news seems right around the corner after he missed his 5th straight game last night. With the Clippers season in the bag there’s not a lot of reason to keep trotting Kaman out while he’s injured. In his place Josh Powell has been starting and is quite capable of putting up a double-double as he did last night with 10 points, 12 boards and 2 blocks.

While there’s no reason to drop Kaman (Or Marion) until something official has been announced, adding Powell would be a solid insurance policy for the immediate future.

Flip Murray played 30 minutes for the first time last night in a Pacers uniform, getting the starting nod over Travis Diener. Murray had a marginal 14 points, 3 boards and 4 dimes but should be in line for more 30 minute nights going forward.

Although he didn’t record a steal last night, he’s usually a solid source for those as well. Travis Diener was scoreless and Jamal Tinsley pleaded out, leaving Murray as the best option for the Pacers.

Owners that added Anthony Carter as a 3rd point guard need to be aware that Chucky Atkins is back in uniform for Denver. Atkins is averaging around 20 minutes a game and has hit 5 three pointers in each of his last two contests. Those numbers are a little inflated because they were blowout wins, but Atkins is poised to cut into the already marginal value of Anthony Carter, and may turn out to be a better option. Keep your eye on his production and minutes going forward.

I’m sure it’s clear by now that I’m a heavy proponent of an add/drop strategy, especially this late in the season. This is the final week of the regular season format in Yahoo leagues and if you’re looking to move up in the rankings, adding and dropping players like Sasho Pavlovic, Chucky Atkins, Rasho Nesterovic, JR Smith, Earl Barron, Flip Murray, Jerry Stackhouse, Marko Jaric, or Derek Fisher will get you extra games and production.

It’s better to add/drop guards because their value is easier to replace. In leagues that require you start two centers, I recommend you hold onto your bigs as they’re more likely to get swooped up on waivers. Knowing what you need to move up in the standings, or avoid being passed, will allow you to dictate how far to go with your strategy. I would rather get into the postseason and let things play out then hold onto players of marginal value and get passed over for the postseason.

At this point in the season it becomes very difficult to figure out who’s going to play extended minutes, and the best way to predict this is to take a look at team standings and playoff position. I mentioned Shawn Marion earlier in the column; clearly he has less incentive to return to the court then a player whose team is in the midst of the Western Conference playoff race. Teams like Boston and Detroit will also allow their veterans to rest after they clinch their respective playoff spots.