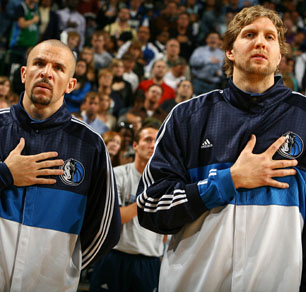 Did you catch that clip of Mark Cuban looking extra salty after the Spurs defeated the Mavericks on Sunday? His expression is the NET result of a blockbuster trade that’s yielded an 0-8 record against above .500 teams, combined with watching his franchise player crumble on the floor after attempting to pin a layup.

Dirk’s MRI has confirmed previous reports that he suffered a knee and high ankle sprain and is going to miss at least two weeks of action.

I own Dirk in a daily league, and although it’s going to be a painful drop, owners are left with little choice considering the best case scenario is a comeback in the final week of the season.

In Dirk’s absence, Brandon Bass will see extended minutes and Jerry Stackhouse will step into an increased role in the offense. Stackhouse has been playing well and should be picked up if he’s available on your waiver wire, while Bass will have an opportunity to average 10 points and 8 rebounds with the extra minutes.

Gilbert Arenas has been toying with the emotions of fantasy owners all season and the saga may have reached its climax on Sunday. Reports surfaced that Arenas was likely to suit up for the Wizards’ nationally televised game against the Pistons. The Wizards doctors apparently didn’t get the memo, and Arenas wasn’t cleared to play. A visibly frustrated Arenas said, “Ya’ll don’t have to write any more. I’m not coming back this season.”

Arenas’s reaction was the result of an emotional letdown after hoping he would be cleared to return. Eddie Jordan stated, and Arenas later confirmed, that the knee will be re-evaluated next week and he still may play this season. I don’t shoot craps, so I’m not rolling the dice by holding a player who might return for 8 games.

However, if you’re a top seed and were awarded a bye this week it doesn’t hurt to stash Arenas and hope he’s cleared by next week’s lineup deadline.

The Pacers announced this weekend that Jamaal Tinsley will be shutting it down for the remainder of the season, news which came as a surprise to absolutely no one who remotely follows basketball. As per the norm, Tinsley’s 2007-2008 season showed signs of brilliance blended with a propensity for injury and controversy.

Fantasy owners who gambled with Tinsley earlier in the year enjoyed monster assists totals and hopefully moved him while he was hot. I feel like I’m taking a high percentage shot when I predict Jamaal won’t be suiting up in a Pacers uniform next season.

The Pacers also announced that Jermaine O’Neal’s knee has responded extremely well to treatment and he could return to the team within a week. If O’Neal was dropped in your league, and you can afford to stash him, now is a good time to swoop him up. Even if his offense is limited, his rebounding and blocks will make solid contributions for any playoff push.

For many fantasy formats, week 22 marks the start of the postseason. The fantasy playoff format is a bit backwards, in that the best players are prepping for the actual playoffs, and minutes and production are much harder to figure out.

As frustrating as that can be, owners are also forced to deal with phantom injuries – How’s your back feeling Shawn Marion? – and pre-mature shutdowns from contributors on teams looking to get their franchise logo on a few more ping pong balls.

With that on the table, let’s take a look at some guys who are primed to contribute for their teams in the final weeks of the season.

Bonzi Wells – With every game that passes, Wells looks more comfortable in New Orleans. On Saturday night he broke out for an amazing 8 steals, and performed well offensively in week 21. Byron Scott is going to need Bonzi’s toughness in the playoffs, and I expect him to get the majority of the minutes at the two spot the rest of the way. If you’re toying with a roster spot, I think Wells is a terrific addition for his ability to score, steal, and rebound.

Luke Ridnour – Earl Watson banged up his right calf last night and his inability to stay healthy has opened the door for Luke Ridnour in Seattle. Although there hasn’t been an injury report on Watson as of yet, he missed last nights game and could be out longer. If he’s going to miss extended time with injury, Ridnour will instantly become a must add player.

Chris Quinn – Pat Riley announced that Jason Williams will be inactive for at least a week with a cast of his hand leaving the point guard duties to Chris Quinn. On Monday night Quinn had 24 points, 4 assists and 4 steals and should continue to produce the rest of the way. He’s a must-add guy for the week and if Williams shuts down, for the season.

Spencer Hawes – The Kings’ season is a wrap and with Brad Miller dealing with an injury to his elbow it makes sense to limit his run and develop Hawes. The rook has shown flashes of brilliance this season and put up 19 points, 12 boards, and 3 swats on Saturday night. There’s no reason he shouldn’t see extended minutes the rest of the way and be able to contribute for fantasy owners in need a big fella. Monitor Brad Miller’s health and if Hawes sees consistent minutes, add him right away.

John Salmons – Here’s another King who stands to benefit from an injury to a starter. If Ron Artest goes out for multiple games, pick up Salmons immediately. He was a DNP on Saturday night and may continue to rack them up the rest of the way. Salmons was a beast at the start of the season and adding a player of his caliber in the right situation is exactly the kind of move that wins fantasy leagues. If Salmons is already owned, Francisco Garcia would also benefit from long term absence of Artest.

Darko Milicic – He’s been as inconsistent as anyone in fantasy hoops this year but Darko has played well lately and is always a solid source of blocks. Memphis has been a guessing game all season but owners in need of a boost to their frontline would be wise to add the Serbian Assassin.

Nenad Krstic – I’ve given you three options at the 5 spot this week and I’ll be the first to admit they’re far from guarantees. Krstic is the best center in New Jersey but his tick has been limited this season with injuries and conditioning problems. He played 34 minutes on Saturday and if that trend continues his value will be fantastic the rest of the way. He’s worth adding or at the very least monitoring his minutes, if he gets over 30 again, pick him up.

Mardy Collins – My Temple bias may be showing on this one, but Collins can really play and when given the opportunity he’s performed quite well. Nate Robinson missed another game on Monday with knee soreness, and with Isiah Thomas mixing things up in New York Collins may once again finish the season on a high note. He doesn’t shoot a good percentage but will wrack up the rebounds, assists and steals.

Flip Murray – He should already be owned in your league but if he’s available pick him up. His shooting can be erratic but he’s versatile enough to produce in other categories and is also a great source of steals.

Jeff Green – 23 points, 7 rebounds and 3 dimes in 34 minutes on Saturday combined with 4 games this week makes Green a very solid add to fantasy rosters. He’s been up and down this season but should be getting all the minutes he can handle the rest of the way and producing in all formats.

Good luck in the playoffs and remember the ultimate goal is to survive this week into the next. If that means dropping someone like Gilbert Arenas, Elton Brand, or Dirk you’re better off making those moves sooner rather than later. However, in the case of Brand, the Clippers are now saying he’s 100% healthy and could be available for the final six games of the season.

The Magic are the only team playing 2 games this week so if you’re holding onto fringe players like Maurice Evans or Keith Bogans in deep leagues, part ways for one of the players listed above.

I’ve received a bunch of emails from readers in Yahoo formats asking me what system Yahoo uses to break ties in head to head leagues. If this applies to you, this will explain everything.

As always, thanks for reading and please leave any questions in the comments section and I will get back to you as soon as possible.