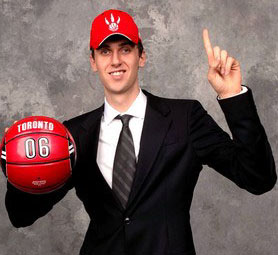 I tried to write a clever intro praising Kobe Bryant’s assault on the league this past week but you all already know what went down. No doubt my praise would end up like recycled clichés that have been spit throughout the country as Kobe went madman on the NBA. So I think it’s best if I simply suggest a moment of silence for the Mamba.

I liken his scoring tear to the introduction of Jay-Z’s “Kingdome Come” album. Can’t you just see Bryant sitting in the trainer’s office prepping for the game as some old head, who for one reason or another, has his ear struts in and starts talking to Kobe in an extra dramatic tone? “You got this fantasy in your head of, not shooting the ball as often and making Luke Walton an All-Star…What the f*** are you gonna do except score the ball?” Sorry, I couldn’t resist. Any old way, the season is over and it’s playoff time so let’s get right into it.

Keep your eye on the progress of Peja Stojakovic, who has been sidelined for the past four months with a back injury. The injury has made his adjustment to the N.O. a rough one but he could still be a valuable waiver wire addition late in the season. I wouldn’t expect major production right away, but go ahead and drop the 12th man on your roster and give him a chance to shine. When healthy he is a great source of three balls and baskets. He was supposed to return last night but now it looks as if next weekend is his new return date. No question that someone in your league is going to make a move for Peja, so if you can’t afford to risk that, I suggest grabbing him ASAP.

Joe Johnson owners who have been holding out for some good news from Atlanta received a dagger on Wednesday when the Hawks announced that Johnson would be walking with crutches until at least early April. Then, upon waking up this morning I received an email that he was walking without crutches and joking about playing against the Mavericks last night. Johnson remains a tough call but I would be surprised to see him return this season. It’s great that he is itching to return to the floor, but with the Hawks out of the playoff race, I can’t understand why they would allow this. If you like what you see on the waiver wire and want to make a move, knock yourself out. If you participate in a keeper league Johnson deserves consideration for a holdover. That decision, however, depends entirely on your league settings and how deep your roster is.

I have no idea what an emergency appendectomy is, or what the surgery involves, but as a general rule of thumb any medical procedure with the term “emergency” attached isn’t a good look. If I ever get a chance to catch up with the 2006-2007 #1 draft pick Andrea Bargnani, perhaps he can fill me in on the details of the operation after a successful trip under the knife Wednesday morning. Bargnani underwent the surgery after coming down with an illness following Raptors’ practice on Tuesday. The surgery will force Bargnani to miss a majority of the remaining regular season games and that is a serious issue for owners who are holding the rook. AB got off to a crawl this season but has adapted well to the NBA style of play and has been a fairly solid source of points and three balls since Vegas. He may be back on the court at some point this year but should be dropped in all leagues if a viable waiver option is available.

When the Ron Artest drama unfolded March 5th and the Kings suspended their small forward indefinitely, I wrote that I thought his season was over. I was also quick to recommend owners take 20 cents on the dollar for Artest in deals across the board. Apparently I am one of those dumbs. Artest’s not guilty plea on assorted charges of domestic violence on Thursday came with a restraining order and nothing else of substance. For now, it seems the TruWarier will be suiting up for Sac Town the rest of the way, hate it or love it.

Hey, Charlie Villanueva! Thanks for coming out this season, really, thanks. Word broke during the Cavaliers-Mavericks game on Wednesday that both Charlie V. (shoulder) and Andrew Bogut (mid-foot sprain) are calling it a season for Milwaukee. Anyone who has taken a chance with Villanueva this season will testify that the second-year forward has been as frustrating to own as anyone in the league. Remember when the Raptors drafted Villanueva with the seventh pick in the 2005 draft and people were absolutely killing the pick? I realize CV never fully recovered from his shoulder surgery this year but he has certainly left the door open for those critics to creep back into the picture. Bogut’s situation was much more of a surprise because I had no idea that his injury was this severe (tank?). This is bad news for owners who rely on his scoring and rebounding, but in his absence, grab Brian Skinner off the wire. Skinner will be a solid source for buckets and glass work.

If Hakeem Warrick, Chucky Atkins, or Rudy Gay happen to be available in your league, first off, your waiver wire is boasting a plentiful harvest, and second you should consider all three for week 22. As we discussed last week, the Memphis Grizzlies are blessing owners with a five game week in what happens to be the first week of the fantasy playoffs in most formats. I apologize if I keep hammering this point but in week 22, with five games on their schedule, guys like Warrick and Gay are potentially more valuable then anyone on the Washington Wizards who only run twice. I’m not saying you should adios Arenas or Jamison for Gay or Warrick, but if you are holding onto some bubble players cut those ties and run with the Grizzlies.

A few weeks ago I suggested that Ray Allen was going to shut down his season prematurely to deal with bone spurs in his left ankle. Allen has apparently been playing in pain for quite some time, and with the Sonics’ playoff hopes dead, now is a good time for him to call it a year. In his absence expect Damien Wilkins and Earl Watson to be the principal beneficiaries with more time on the court.

David Lee has forged a reputation for toughness around the league but the second-year forward took it to a new level on Thursday night when he checked into the Knicks’ game against the Blazers well ahead of schedule. Lee only played 10 minutes on in that game and didn’t suit up on Friday night. If you’re still holding onto Lee I recommend monitoring his progress tonight against Orlando and then making a move. This whole situation has been handled poorly and is quite frustrating for his owners. If you have a solid waiver prospect and don’t like what you see tonight, thank Lee for his services and move on.

I don’t see a player that jumps out as a must-own guy this week on the waiver wire. The Kings have a favorable schedule, aside from this week, and John Salmons is going to get minutes with the injuries in Sac Town. The name Walter Herrmann doesn’t sound much like ballplayer or someone I want to pick up on my fantasy team. But with the injuries in Charlotte he has recorded a double-double in six out of the last seven games played. When the ‘Cats get healthy it’s going to be a wrap for his tick, but while the injuries are plentiful he should be hoopin’ for your squad. I also recommend keeping an eye on Juan Dixon and Morris Peterson to see who is going to benefit in Bargnani’s absence. They will be battling each other for tick and shots but one of the two will be worth a flyer in the upcoming week.

That’s it for this week. I suggest owners huddle their team together and do the whole arm over arm circle with one of your glue guys in the middle bouncing around while shouting, “WHAT TIME IS IT?” and the rest of your squad letting him know, “GAME TIME, HUUUUU!” Actually, since this is fantasy basketball, that might be a bit creepy, but hey, a fantasy crown means bragging rights until next October and sometimes you have to go the extra mile, you feel me? I’ll talk to you next week.