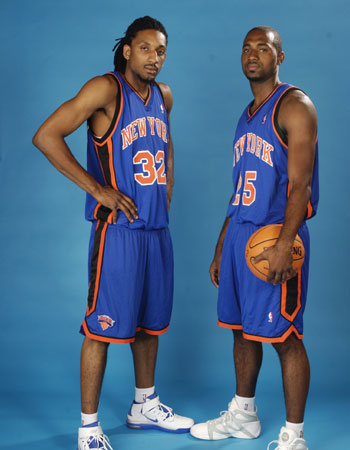 It’s no longer up for debate. The 2006-2007 NBA season is without question the most injury-plagued year in league history. I mentioned in a previous post that if your fantasy squad hasn’t been decimated by injuries this year, you should play lotto. Those of you who took my advice, what’s good with that check? Trying to wet my beak a little.

It’s hard for me to believe the final week of the fantasy season is already upon us. I got a number of emails from readers complaining that the onslaught of injuries this season has made their league’s playoff race more a matter of who’s healthy then who’s producing. I have also read a couple of theories that suggested the Oden/Durant race is the catalyst for a number of “season-ending” injuries that might be sucked up under different circumstances.

Listen, I hear you. I have definitely been crushed by injuries this season as well. In one league I lost 5 players to season-ending injuries. What a nightmare! But anyway, I’m just going to hold my head and ride or die with my mans and them Walter Herrmann and Tarance Kinsey. Let’s get this W! And real talk, if you would have told me in October that I would be starting a dude with Fabio locks and a guy named Tarance during the final week of the season…let’s just say I would have told you to go on.

Agent Zero (knee) was compromised this week and becomes the latest “can’t cut” superstar to succumb to a season-ending injury. I owned Gilbert in three leagues. Fantastic. The Wiz kids are now without their two all-stars and it is going to be the Antawn Jamison show down in D.C. With Arenas on the shelf, grab Antonio Daniels who will take his place in the starting lineup. Daniels is a capable player and should be an excellent end of the year pickup for owners in need of some help at the point.

Injuries to AK-47 (thumb), Tyson Chandler (toe), Al Jefferson (foot), and Paul Pierce (elbow) make these four a risky start this week. Of these guys it seems that big Al Jefferson may be the highest risk. He has talked about shutting it down for the year and has hinted that this might allow for a fresh start next season, when “things really matter.” Fantasy owners need to let Al know that the time is now and the man needs to get back in the paint and get those buckets and grab those boards.

Depending on Chandler’s situation owners may also want to grab Marc Jackson, who will be starting in his place. Jackson is far from spectacular but the former Temple Owl, and North Philadelphia native, will score points and snatch rebounds. If Chandler continues to miss time, make a move for Jackson.

If you’ve been following this column you know I’ve been pumping young LaMarcus Aldridge for a long time. I referred to the kid as a can’t miss start for this past week and what does he do? He goes ahead and gets his Eddy Curry on with an irregular heartbeat. Big up yo’self. Seriously though, Aldridge has been suffering from an irregular heartbeat but is reportedly doing better and will be reexamined today. The Blazers play four games this week so keep your eye on this situation to see if you should start Aldridge or cut him loose. Although they are once again lottery bound I think most people would agree that Portland has something cooking for the future. A lot of young talent out there; believe that.

19 points, 12 rebounds, eight assists and five steals. This seems like a stat line that would be inked in next to a guy like the Matrix or King James but it was Knicks’ rookie Mardy Collins who put it down Saturday night against the Bucks. Collins is a 6’6 combo guard who has taken advantage of the injury situation in New York and is getting his shine on. Collins isn’t a good shooter but he is a terrific defender and if given minutes will continue to rack up assists. It seems Isiah likes what he brings to the table and Collins could see a lot of tick the rest of the way in the Big Apple. I’m not saying you should run out and snatch Collins up immediately but if you need backcourt help – especially in the steals department – he may be a valuable resource.

Another rookie point guard making some noise due to injuries is the Celtics’ Rajon Rondo. Rondo was straight gluttonous with his stat line on Saturday, dropping 14 points, eight boards, eight dimes and seven dimes. If he is still available in your league you need to grab him, but we have been down that road before. Rondo is a ridiculous talent and even though this was a miserable year for the Celtics you can’t be mad at their young nucleus, which only stands to get stronger this offseason.

If you’re in the mix of a playoff race I’m sure you realize that the final week of the fantasy season is a 10-day extended period. The only team that plays seven games during the stretch is the Los Angeles Clippers. This means that journeyman Jason Hart is going to have some nice value for the deciding week of the year. As bizarre as it sounds he might be the difference between winning and losing this week, so make sure he is starting on your roster. And yes, I am fully aware how ridiculous that last statement sounds.

Anthony Parker will also be a solid option this week with Jorge G. and Andrea B. sidelined for the year. The back problems that Tracy McGrady is experiencing could give Luther Head a chance to shine, as he did Wednesday night, dropping 30 points on Nelly and the Golden State Warriors. He is an excellent source for the trey ball so keep an eye on T-Mac’s back to see how to play it. It is possible Jeff Van Gundy may decide to rest T-Mac to prepare for the postseason which would open the door for Head to get his shine on. Also be on the lookout for Bonzi Wells who will also see more time with McGrady sidelined.

With Josh Childress done for the year in the ATL Salim Stoudamire will be firing away in this final week of the year. He is a very streaky shooter but has been gunning at a solid clip recently and will need to contribute down the stretch for the Hawks with both Childress and Johnson done for the season.

Remember when Renaldo Balkman was selected in last year’s draft and you looked at your boys and hollered in delight at the absolute absurdity of the pick? Turns out Isiah wasn’t hitting the pipe. Long hair don’t care. Balkman has seen extra tick with the slew of injuries in New York and is producing. He basically is a big ball of hustle but that translates into a productive stat line and a legit option for the final week. Things aren’t looking good for David Lee’s return so Balkman will continue to see time. Nate Robinson matched a career best on Saturday night with 34 points and is also a solid pickup for championship week.

Speaking of energy guys, the Lakers Ronny Turiaf had 19 points and 11 rebounds in the second half of Sunday’s loss to the Suns. He finished the game with 15 rebounds in 25 minutes of action. This is a glimpse into what the French product is capable of given time, but his inconsistency makes him too risky of a play this week.

If you’re not a spectator at this point, with all the things that went down this season, you should be feeling pretty good about yourself. I just saw that D. Wade had 12 points, and 8 assists last night in 27 minutes. Hard to imagine him putting in major week so close to the playoffs but even a quarter of D. Wade is worth picking up. Thanks for reading these weekly columns and believe that I will be in touch with you all with a fantasy wrap up piece.