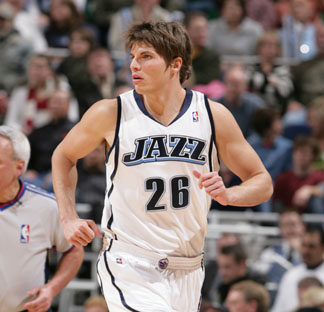 A friend of mine recently moved back to the Philadelphia area after a stint out west and we took the time to catch up over the holiday.

While we shopped it up, the Sixers were defending the Wachovia Center against the Heat in a battle for eastern conference mediocrity.

At one point the camera flashed to Mo Cheeks, then Andre Miller, then Lou Williams, then Kyle Korver, and finally Reggie Evans and Louis Amundson standing beside Samuel Dalembert.

My boy nearly jumped out of his chair, “Damn! Can the Sixers get a couple du-rags spinnin’ in the locker room? Or a new barber or something? If I were Ed Stefanski, my first move as GM would be to get a team barber, EARLY!”

I couldn’t argue with him, but Stefanski wasn’t listening. His first move as GM was trading Kyle Korver to the Jazz for Gordon Giricek and a first-round draft pick. Korver should see a spike in value on the Jazz, and be a good source of three balls, while Lou Williams and Willie Green will benefit in Philadelphia.
I picked up Williams because he had been playing well even before the trade and I needed some back- court relief. Even though he is a fringe waiver guy at this point, if you believe all the Andre Miller trade rumors, he is a must own player.

Although it’s impossible to measure or compare levels of grief after losing a loved one, it’s clear that Stephon Marbury was unable to find solace on the basketball court. Marbury’s father passed away December 2nd and although he attempted to come back into the Knicks’ rotation twice during that time, he was reportedly unable to handle the emotions, and shut it down.

The whole situation is taboo because obviously it’s in poor taste to second guess a man who just lost a loved one, but you’ve got to believe other factors were involved in Steph’s absence. At one point Isiah Thomas refused to deny claims that Marbury might shut it down for the rest of the year. Regardless, Steph was back in uniform last night and came off the bench for New York. I’ve totally stopped trying to predict what Isiah is going to do as far as delegating playing time; right now he makes Don Nelson’s rotation appear set in stone. Check to make sure Steph wasn’t dropped in your league by an impatient owner, and if he was, he’s still worth owning.

When I listed Ron Artest as a risky fantasy draft pick in my preview column, I wasn’t referring to bone chips in his elbow that might require shoulder surgery. Never theless it’s another 2-4 weeks that Artest owners will be without the services of the do-it-all forward. In the meantime John Salmons and Francisco Garcia are going to benefit even further for the Kings.

Garcia will certainly provide value but Salmons is the true stud here. He’s been the best roster addition this season and impatient owners who dropped him upon Artest’s initial return to the Sacramento lineup (unfortunately, I was among them) have got to feel ill when they see a stat line like Wednesday’s against the Knicks. Salmons had 32 points, 11 rebounds and 6 assists. Actually, ill doesn’t describe it, when I see Salmons putting in work like that, Clay Davis’s patented line from “The Wire” is far more appropriate.

If you consider that Beno Udrih, Francisco Garcia and John Salmons have all been solid roster additions this season, the Kings are the runaway fantasy sleeper team of the year. Recently joining those three is Mikki Moore, who has come on strong after a very slow start to the season. Kings head coach Reggie Theus has already said Mike Bibby is going to have to earn his starting job when he returns to the team, and praised Bibby’s ability to play both guard positions. To me this is a sign that Beno Udrih will retain his value. With that said you should check your waiver wire to make sure that Bibby isn’t available.

If Randy Foye is still hanging around your waiver wire, he won’t be for long. Foye’s next knee evaluation is Monday the 7th and chances are he will be cleared to practice with the team at this time. If you want him to suit up for your squad, make your move now.

Antonio Daniels returned from injury last night. He should provide a couple months of solid value until Gilbert Arenas returns and may have been dropped in your league. Nothing about Daniels game will stand out but he won’t hurt you in any category, and will be a terrific second or third point guard option. In his return on Wednesday he scored 18 points and added 2 assists, but the key here was the minutes played.

I’ve already given you some names to investigate this week on the waiver wire but let’s take an additional look at some players who should be available in your league:

Nate Robinson – It pains me to have a Knick on this list, and if you decide to add him, do so at your own risk. With that disclaimer out of the way, Nate has been producing this season, and even with Marbury’s return to action Wednesday, he had 19 points, 4 rebounds and 2 assists.

Chris Duhon – Duhon was recently promoted to the starting point guard slot in Chicago; however, thus far this hasn’t equaled production. Keep your eye on Duhon but don’t pick him up until he starts to put up some numbers. Ben Gordon is the 6th man but clearly he and Kirk will finish games in Chicago.

Carlos Arroyo – With Jameer Nelson in a tailspin Arroyo has been named the starting point guard in Orlando. After last night’s 16 points, 3 rebounds and 7 assists he is likely to be picked up in a lot of leagues. I like Arroyo’s game and if you have a roster spot, make it happen, but don’t expect too much from him in the long term. The position is ultimately going to be Nelson’s and even though he is slumping right now, I see him returning to form shortly.

Lou Williams – I added Lou after a couple solid outings for the Sixers and after Korver was traded to the Jazz. It’s clear that the 76ers love this kid and really, what’s not to love? He plays hard and has talent worth developing, especially on a rebuilding team. If the Sixers trade Andre Miller he will become an instant stud, but for now, a guy like Arroyo or Daniels will provide more value.

Willie Green – He’s on the bench with a groin injury at the moment but when he returns he’s going to offer owners a nice scoring punch. Green is averaging around 15 ppg and those numbers will only rise with Korver out of town. Don’t expect miracles from him, but his scoring makes him a solid addition.

Andrea Bargnani – He’s one of the year’s most disappointing players but if he’s available in your league he deserves a roster spot. He’s a #1 draft pick and he’s going to continue to get minutes and develop his skills. And yes, I would have said the same thing about Kwame Brown a few years back, so the #1 draft pick theory isn’t a sure thing.

If you’re in a 12 team league or higher, there should be some help in the names mentioned above. Of all the guys listed, I like Antonio Daniels as the most reliable pickup, and Lou Williams as the (Jay Bilas stand up!) guy with the most upside potential.

Happy New Year to everybody, hope you brought 2008 in right. My girlfriend sequestered my Blackberry for the evening as a jump start to her resolution to keep me from checking stats all the time. What a nightmare! This year my resolution is to stop chasing inconsistent waiver pickups like everyone not named Al Jefferson on the Wolves, Dorrell Wright and Sean Williams. It’s just too painful at this point. Talk to you all next week.