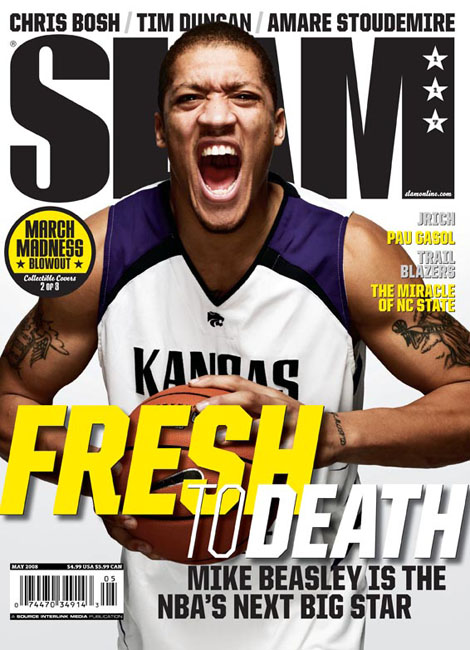 This year’s NBA Draft is following the Groundhog Day script again for NBA lottery teams. Or, as Yogi Berra aptly put it, “déjà vu all over again”. Last year the NBA’s bottom feeders were praying to their four leaf clovers that their team would get one of the top two picks in the NBA draft and, subsequently, secure the services of Messrs. Oden or Durant. This year is the same story, only the names have changed. Kansas State’s Michael Beasley and Memphis’ Derrick Rose appear to be the gems of the draft in ‘08.

Not surprisingly, Rose and Beasley lead their respective positions in SLAM’s draft prospect positional rankings. Does your team need a big man or a high scoring wing and wonder who they should take? Wonder no longer.

Point guards with Rose’s size, strength, speed and skills don’t come around too often. No doubt within a couple of years Rose will be one of the preeminent point guards in the League. Chris and Deron, set another spot at the table, Derrick is coming to dinner.

Calling Bayless quick is an understatement – the man has wheels. While he filled up the nets with ease in college, he will have to become more of a pure point guard to excel in the pros.

Coming out from under Durant’s skinny shadow this season, Augustin blossomed. A true point guard who can also fill it up on his own, his only real concern is his lack of stature (listed at 6’0”, he’s probably shorter than that).

Lawson struggles with the same height issues as the man listed above, Augustin. Ty offsets this a bit with his quickness (perhaps the fastest in the NCAA) and his solid frame.

In the public eye since the Reagan Administration, or so it seems, Mayo finally seemed to wear out his welcome. That is to the benefit of teams drafting outside of the top two slots, as whoever gets Mayo will be getting an explosive player capable of playing either backcourt spots.

It takes a special player to put up big scoring numbers in the big, bad Big Ten. Gordon is that type of special player, leading the conference in scoring with over 20 a game. His height may limit him in the pros though.

About as unorthodox as they come, Douglas-Roberts still gets the job done. While he needs to get stronger, and show that he can guard strong, athletic NBA two-guards, CD-R’s freaky game and wingspan should serve him will in the pros.

It seems like Rush has been a possible draft early-entry candidate for the past decade, but now that he’s got his championship he’s finally officially in the draft. While he probably won’t be a superstar, his all-around strong game and long arms will make him a solid pro.

One of the best athlete’s in the draft (he may be an even better volleyball player than hoops), Budinger has some serious ups and a good long-range shot. While he does have star potential, worse case scenario he at least should be the next “Great White Hope” in the NBA dunk contest.

The son of a pro player, Gallinari is a big, athletic wing player. Despite his young age, he is very experienced and was his Euroleague team’s best player.

Another youngster who competed in the Euroleague was the versatile Batum. He has a terrific all-around game, but doesn’t always bring it every night, similar to fellow Frenchman Boris Diaw.

Another white man who can jump, Alexander is a classic late bloomer. He has NBA athleticism and size, but still is a work in progress.

After a breakout freshman season, the long, but very lean, Randolph feels he is ready to play-for-pay. Capable of playing either forward positions, whoever drafts the athletic youngster will have to be patient while his game and body matures.

Near seven-footers who can hit the three are always in high demand, so Greene shouldn’t have any problem earning a living on the hardwood. However, he probably would be best off heading back to upstate New York for another year to improve his draft stock.

The second coming of Durant, Beasley terrorized the NCAA this season. If a team is looking for an inside/outside scoring machine and glass crasher, just Leave it to Beasley.

A perfect NBA power forward prospect – size, athleticism and skill. While he may not be ready to dominate the NBA right out of the gate, he could be a sleeper pick in this year’s lottery.

Trying to project Love’s impact in the NBA is difficult because there really aren’t any players out there similar to him. His lack of NBA athleticism and height (probably only 6’9”) probably makes him a better college player than pro.

A big, strong, athletic player, Hickson probably should return to Raleigh in the fall considering he may not get his name called in this year’s first round.

Coming straight outta Congo, now playing professionally in Spain, Ibaka possesses NBA athleticism and length. However, due to his inexperience, at this point he is still more potential than substance.

Otherwise known as the short-haired Lopez twin, he is also the more talented of the two, with strong skills at both ends of the court. The Michael Jackson fanatic should have a long, lucrative NBA career.

It’s fitting that McGee played his college ball in Nevada because he is the ultimate gamble pick. Very inexperienced, with a physique that makes Tayshaun Prince look like Mr. Olympia, he is also very athletic and very, very long.

The man given the unenviable task of filling Oden’s size 18 shoes at Ohio State, Koufos did a remarkably good job. Despite growing up in Ohio, he plays like a classic European big man – good outside shot, can put the ball on the floor – and fittingly plays in Greece’s National Team system.

A player with tons of “upside”, Jordan will need a few more years to truly be ready for the NBA. The fact that his productivity declined as his freshman season progressed isn’t a good sign.

All you need to know about Ajinca are his measurements – 7’1” with at 7’9” wingspan. With a lot more experience, and a ton of protein shakes, this shot-blocking menace could be a keeper.

Jeff Fox writes more extensively about the NBA draft and college basketball at www.collegehoopsnet.com. All hate mail can be directed to him at [email protected]