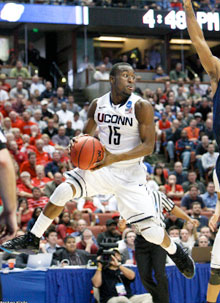 While this year’s NCAA Tournament has lived up to its nickname (has there ever been a year as mad as this one?), it’s been a little disappointing for followers of the NBA Draft. While having “Cinderella” teams like Butler and Virginia Commonwealth in the Final Four is exciting, the number of future NBA players competing this weekend in Houston is limited because of all the madness that ensued throughout the early rounds.

With two mid-major schools knocking off big boys on their way to the final quartet, NBA draftniks are left with a field lacking in prospects. With that being said, here’s who you — and the scouts — should keep an eye on this weekend (and, no, we didn’t forget to include VCU — unlike previous years, they are bereft of NBA prospects on their current roster).

We propose a new nickname for Kemba Walker — “Mr. March.” Four times this month Walker has topped the 30-point mark in a game, including twice so far in the NCAA Tournament. How’s this for a statline — in four tourney games this year, Walker is averaging 26.8 ppg, 5.3 rpg and 6.8 apg. The diminutive NYC product has shown that the bigger the stage, the bigger his game, which will only help his draft stock. While it is never a smart idea to judge a player on one game alone, how he does against Kentucky on Saturday could provide insight into how he’ll perform in the NBA, as the Wildcats have a big, athletic point guard in Brandon Knight, the type of player Walker will have to deal with in the League.

While Terrence Jones has had a quiet NCAA Tournament (10.3 ppg, 6.8 rpg), there is no denying his talent. With the size and strength of a power forward, Jones also excels at putting the ball on the floor and creating for himself off of the wing. While his steep dropoff in production over the past two months of the season might indicate that he isn’t quite ready for the NBA yet, with him being projected as a sure-fire lottery pick don’t expect to see him back in Lexington in the fall. But can he go out a winner?

It’s still up for debate which Wildcat will be the first off the board at June’s Draft — Jones or Brandon Knight (or will it be their ineligible “teammate,” Enes Kanter?). While Knight has been lauded for his two game-winners so far in the Tournament for Kentucky, he has had an up and down performance — 2 points one game, 30 the next; 9 points one game, 22 the next. But he still was confident and skilled enough to shake off horrible shooting nights to come through in the clutch when his team needed him the most, showing very important intangibles in regard to his NBA stock — his basketball IQ and his mental toughness.

Shelvin Mack was one of the mid-major draft prospects that we identified before the Tournament began — however, little did we know he, and Butler, would still be balling this late in the proceedings. Mack has contributed what he always does to the Bulldogs — points on the scoreboard. He’s averaging 21.3 ppg thus far in the Tourney, including 30 points and 7 three-pointers in Butler’s upset win over top-seeded Pittsburgh. But can he play point guard in the NBA?

Read more of Jeff Fox at The Hoops Manifesto and The MMA Manifesto.