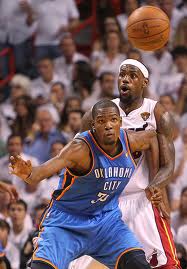 Fourteen hours after the sun shone on the Miami Heat and a mushroom cloud enveloped the Oklahoma City Thunder, both teams reported back to American Airlines Arena for practice.

The Heat, owners of a 3-1 lead in the series, would love for that to be the case. They would love to clinch a Championship at home, would love to avoid a return trip to Oklahoma City.

The Thunder, who lost three straight games only once during the regular season, hope to practice at least one more time at, as both teams keep saying, all costs. As much as they’ve come to abhor all the attention and extra media scrutiny that comes with playing in the Finals, the Thunder are not ready to give it up just yet.

With those stakes in mind, both teams were careful not provide any sort of bulletin board material at AAA this afternoon. That said, some interesting observations were made at what might very well be the last practice of the NBA season:

“Right now it’s not about Xs and Os, it’s about who want it the most.”—Kendrick Perkins, on potential adjustments that need to be made in Game 5.

“We didn’t get here just to make it here and say we did.”—Kevin Durant, on not being satisfied unless OKC can win it all.

“We need to release everything from yesterday, cleanse ourselves and get prepared for tomorrow night’s game.”—Daequan Cook, on what he learned from playing in the Final Four at Ohio State.

“You’re saying pass to my teammates?”—Durant, questioning a questioner

“Just icing”—James Harden, on the large ice-wrap on his hand.

“Today I told James, ‘You’re a great player. We need you to be more aggressive.’ And that’s true—James is one of the best players on the court.”—Perkins, on Harden not letting his severe struggles get to his head.

“We haven’t lost faith and hope as a team.”—Cook, on what he’s currently thinking.

“We’re going to keep fighting to the end, and hopefully we can take this thing back to the crib.”—Durant, on hopefully winning Game 5 and bringing the series back to OKC.

“If you care about the game, and if you care about winning, you absolutely know that you go home and think about things like that.”—Perkins, on if he or his teammates harbor any regrets from the past few games.

“Everybody else brings the hype around it, all these people here, all these cameras, media. But at the end of the day, it’s basketball. That’s all I learned.”—Durant, on focusing, on distractions, on what needs to happen in Game 5.

“I roll with Coach Brooks all day.”—Perkins, on if he meant to call his coach out when he questioned the subbing pattern after Game 4.

“Obviously I’m getting very good shots—the shot’s just not falling.”—Harden, on his play.

“I feel a lot better than I did last night…and also with the game basically  being at midnight tomorrow night, I have all day tomorrow too to prepare. I should be fine by tomorrow night.”—LeBron James, on how he currently feels, and how he’ll feel for Game 5.

“I think we’ll be able to better hydrate and be more proactive now that we know what the environment is like.”—Coach Spoelstra, on Bron dehydrating and the AAA being hotter than usual.

“I’m sure it’s a huge weight on his shoulders, but that’s why he has teammates.”—Udonis Haslem, on the pressure LeBron must be feeling.

“The pressure? I haven’t really felt it that much. Last year it was much more than it is today.”—James, on pressure.

“Looking at the tape, there are still so many things we can improve on. That’s the fun part. If we could play this game right now, we would.”—Shane Battier, on what he made of their Game 4 performance.

“It’s all about being a professional and staying ready.”—Joel Anthony, on what allowed Norris Cole to have such an important role in the game.

“I don’t remember too much of 2007.”—James, when asked to recall his previous Finals.

“Just not changing anything.”—Anthony, on how he’s staying prepared in case his number is called in Game 5.