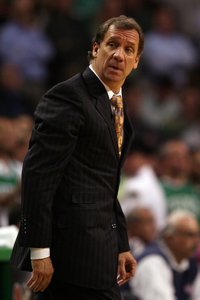 Flip Saunders may be the only coach in the world whose job security is always (seemingly) on the line, despite the fact that he’s made it to the conference championship round in every year he’s been on the job.

That may no longer be the case, for another season at least.

Somewhat surprisingly, some in the Detroit media are hinting at Saunders being the Pistons’ bench boss next year.

Saunders met briefly with Pistons president Joe Dumars on Saturday and all indications are that he was told he will be back.

Understand that with the Pistons, a coach’s job security can change in an instant, but as of today, the plan is for Saunders to finish out the final year of his contract. He’s already working on next season. He will supervise a workout of draft candidates at the practice facility Wednesday.

Should Saunders keep his job, he can expect Joe Dumars to give him a slightly different roster than the one he’s had all these years in Motown to work with. I’m certain, though, that good ol’ Flip will find a way for them to underachieve, too. It’s sort of his gift.