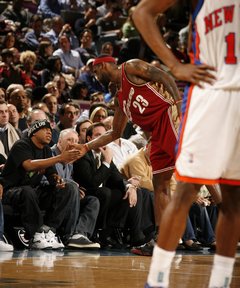 You know about the infamous NYC for LeBron website – an absurdly silly attempt to bribe James to come to New York once his current deal with the Cavs is up in 2010 – and now it appears that someone who used to work for the Cavs may be behind the whole thing.

Perhaps more troubling for nycforlebron.com is that Earl Patton, the Cavaliers director of basketball administration from 2001 to ’06, appears to be a part of the group that founded the site. He denied involvement when reached by phone last week.

“We obviously would have to look at this type of fan very carefully,” [NBA spokesman Tim Frank] said. “We’re not prepared to say at this point whether we think it implicates any [collective bargaining agreement] rules. We would have to know more facts.”

Not only do the likes of Jay-Z want LBJ hooping in the Big Apple, but former Cavs employees too? You’ve got no chance, Cavs supporters.