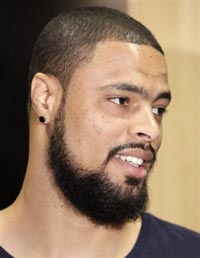 Bosh to Heat
He’s no help to the Heat because he’s just another Udonis Haslem. I really don’t understand the hype about Chris Bosh. He’s never won a championship and has been overhyped from college to the pros. I don’t know how people equate winning with Chris Bosh. I really think he’s a bum.

Boozer to Bulls
This was good pick up for the Bulls even though he’s not a great defensive player, but it doesn’t matter in the East because there aren’t a lot of big guys to cover, other than KG and they have Joakim Noah for that. He’s a double-double guy and a good pick up for them.

Amar’e to Knicks
He’s a good pick up for the Knicks, but I don’t think he’s really a franchise player, even though the Knicks may. He’s definitely not the one to turn the organization into a winning one. He’s a good pick up, but they still need a lot of pieces. He’s a good defender, scores and rebounds, but I can’t see him making anyone better around, but he will make the team better. That’s why he’s not a franchise player because he really won’t make everyone around him better.

Mike Miller to Heat
I think he would be a good sixth man, and he still may be a sixth man, so in that case he’s cool. But he can only shoot. He can’t really guard anyone, but he’ll spread the floor with the penetration of LeBron and Wade. Miller’s someone they can kick it out to.

Jermaine O’Neal to Celts
If he stays healthy, he’s a good pick up since he can get 10 and 10 and he can defend a 4 or 5. He also has a nice outside shot. The key for him is to just stay healthy. He’s also a good backup to rest Kendrick Perkins and pair with Big Baby.

Kyle Korver to Bulls
He’s a good pick up for the Bulls and they may have done the best in the offseason. They needed a shooter, and he’s not a defensive liability. He’ll put some points up and they don’t really have a Jon Paxson/Steve Kerr kind of dude. He’s bigger than b

Tyson Chandler to Mavs
Good pickup, but who cares. The Mavs always get good pieces, but never do anything with them. They always fail to overcome their intangibles and are never a playoff threat really. Cuban always does a good job of bringing in players, but does he make the team much better? No.

Ray Felton to Knicks
Nah, that’s Marbury part 2 without the head case. He is a better guard than Chris Duhon though and an upgrade. He can run the offense a little better

David Lee to GS
This a great pickup for Golden State. He was one of the top free agents and he’s gotten better every year. He’s good for a double-double, and he’ll be good on the West Coast. They have good pieces over there, so I think he definitely helps them.

Quentin Richardson to Magic
Who cares; he’s not helping. Just like Vince Carter didn’t help. He’s slow and fat now and doesn’t have the shooting touch he once had so I don’t see him as being much help to the Magic.

Corey Maggette to Bucks
That’s a good pick up in the East. I don’t know if he’ll start or come off the bench, but Maggette is good. He can’t replace Mike Redd, but he can score a little and rebound so that’ll help them a little. He’s not a big difference maker, but he’ll help. You can throw him on a Lebron or DWade though defensively since he likes to get physical.

Hedo Turkoglu to Suns
This is a great pick up for the Suns since he’s been killin’ it the past couple years. His build as a 6-10 shooting guard is crazy. Hedo, Nash and Jason Richardson is a nice little backcourt. JRich can slash and shoot outside, so can Hedo. He’s definitely a good pick up offensively, and Nash can count on him more than Grant Hill.

Samuel Dalembert to Kings
He ain’t doin’ nothin’, but he definitely helps the Kings because I don’t even know who their center was last year. Wasn’t their last good center Olden Polynice? I’m joking, but he’s a good pick up for them to go with Tyreke Evans. But at least he can rebound and play a little defense.

Kirk Hinrich to Wizards
This is definitely a good guard pick up for them to have in the back court with John Wall. They play a similar position, but Hinrich is an underrated defender, he can shoot, drive and pass the ball. I wonder if they’ll start them together though because that would be a small backcourt.

Check out all things Stalley at myspace.com/madstalley and download his critically acclaimed project The Autobiography. Stalley also has a show on Creative Control called “The Milq” so come see what Stalley has been up to. And if you wanna get a little more friendly, say hello to Stalley on Facebook.