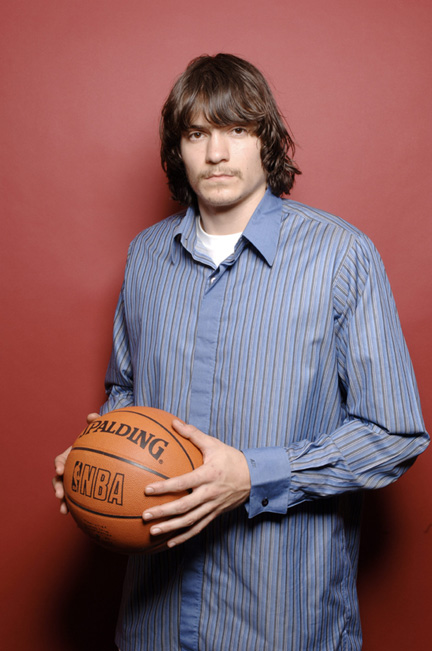 Before we get to the free stuff, a word of warning: For me this is what could be considered Hell Week. The next issue of

Now, onto the stuff you really care about, the free stuff…

They’ve made 5 shirts, 500 prints of each. The shirts dropped nationally on March 1 and will be sold at www.shopadidas.com, adidas Sport Performance stores in Spokane and Las Vegas, select Urban Outfitters and the NBA Store in New York City. The nationwide launch is March 1st and the tee’s retail for $25. And I’ve got one of each design to drop on you.

Instead of doing a straight caption contest, I thought we could be a little more creative. You’ll have 48 hours to come up with a good response — until noon on Wednesday — at which point I’m shutting off the comments and picking a winner, which will probably be the response that makes me laugh the most.

Getting to it…there’s a photo of Adam Morrison below (all credit to the terrific Jenn Pottheiser/NBAE/Getty Images). Take us inside Adam Morrison’s head. Let us know what he’s thinking, or maybe even what he isn’t thinking. I don’t want a photo caption, I want a paragraph that reveals the mind of Adam Morrison. We’re giving you a blank canvas. Make something beautiful out of it.

Have fun with this, and keep it relatively clean.

Winner gets the two shirts pictured above…have at it…