Free T-shirts for fans=Undefeated at home 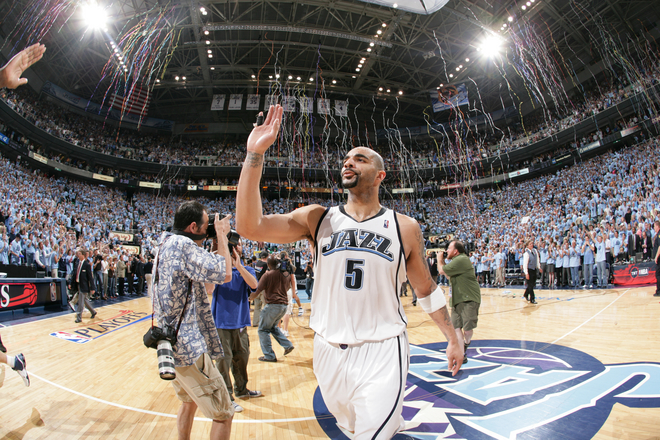 One game last night, and Russ and Mutoni were all over it. The Warriors couldn’t close it out at the free throw line, Derek Fisher played heroically with all that was on his mind, Memo hit a big shot, Deron Williams hit the big shot, Fisher guarded Baron on a last second attempt to win it. Overtime, where the Jazz pulled away.

The NBA Playoffs can be very exciting, and last night they were. Most of the series have been just eh, but every Golden State game has been thrilling, even the blowouts. Utah has a 2-0 lead, a reborn Andrei Kirilenko, Deron and Boozer playing as Charles Barkley would say “fammtassstiik”, and the knowledge that if they can win one of two in Golden State, then the series is pretty much over. The Warriors have their home fans. Neither one of these teams has lost a home game in the playoffs thus far. Both venues have been giving away t-shirts in the team color, picking up where the Miami white out left off last year.

Golden State had the game won but couldn’t finish, much like game 5 at Dallas. Will they live to regret that? Time will tell.

I really just want to jump on to the praising Derek Fisher bandwagon. The Dee Brown injury (ouch!) gave it that added element of Hollywood drama, and Derek somehow was able to do his job very well with thoughts of his daughter and family on his mind. Derek Fisher’s daughter’s health is more important than a silly little playoff game, and you have to love the happy ending last night. Especially for Derek taking the opportunity to use the platform to talk about retinoblastoma and advising people to get checked. All the best to the Fisher family.

Tonight there is a playoff game that will feature neither the Warriors, nor the Jazz. Bulls, Pistons… entertain us.

LOST WAS TOO CRAZY AND AMAZING AND CONFUSING AND FRUSTRATING AND SHOCKING TO DISCUSS IN A PUBLIC FORUM.