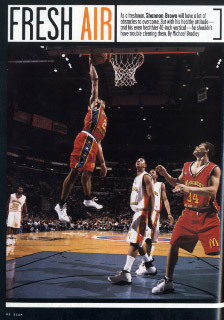 This is Shannon Brown’s sixth year in the L, but unlike his hops, his game and profile have been grounded. Sure, he’s played with both LeBron and Kobe, while snagging a ring with the Lakers last season. But at 5.3 ppg in only 138 games for his career, he’s still got some work to do. The good news is, the kid from Maywood, IL is starting to hit his stride. It started last season in the Playoffs, where he became a solid contributor off the bench for the championship Lakers. This season, he’s averaging career highs in ppg and minutes played, and it won’t stop there. We know he’ll be competing in this season’s Slam Dunk Contest, which will surely raise his profile to new heights. It’s rumored he has the highest vertical leap in the L and needless to say, we’ll be waiting and watching.—Matt Lawyue

It doesn’t bother Shannon Brown that Michigan State coach Tom Izzo tends to get a little, ahem, excited during the course of a game. He’s seen it on TV and in person during his visits to East Lansing. No problem, Brown says. He laughs at the thought of it, although there aren’t too many smiles around when the fiery Izzo starts spewing ash and lava.

Brown’s father, Chris, is a police sergeant in their hometown of Maywood, IL. He didn’t impose lockdown every night or anything, but you can bet there was some law and order in the Brown house. Izzo may be tough, but at least he doesn’t pack heat. “Sometimes you need a coach to get on your butt,” Brown says. “Coach Izzo will keep you grounded, but at the same time, he’ll bring out the best in you.”

Brown credits his dad and his mother, Sandra, with providing the necessary framework that allowed him to succeed as a prep and land at MSU. “My mom and dad wouldn’t let me get a big head,” Brown says. But parents can’t do it all, just as coaches aren’t always able to turn talented but lazy players into stars. No such worries with Brown. He was the one who decided to attend classes at MSU during the summer, choosing a head start in school over the potential setbacks he could have suffered during an idle summer in Maywood. “It was tough to leave, but that was the best thing for me,” Brown says. “If I had stayed there, I could have had some trouble.”

So, Brown hit it hard at State. Up by 8:30 for his 9 a.m. meeting with a tutor. Class from 10:20 to 12:10. A quick lunch, then another session from 12:40 to 2:30. Mondays and Wednesdays, he’d lift for 90 minutes in the afternoon. Then came some ball in the Spartans’ open gym with current MSU team members, as well as the occasional celebrity guest like Mateen Cleaves, the point guard on Michigan State’s 2000 national title team. “I was exhausted after all that, but I still had to come back to my room and study,” Brown says. And what did you do today?

“He could be a special kid,” confirms Izzo, proving that he can dish out the praise when he’s not kicking ass. “He has a good family, is a good student, is 10 minutes early for everything and is accountable. If he stays grounded, he’s got a chance to be really good.”

Given his 40-inch vertical, it’s hard to imagine Brown being literally grounded. Those hops are a gift that helped him finish second in the McDonald’s All-American Game dunk contest (many thought he actually beat that James kid from Ohio) and made it all but impossible for defenders to keep him away from the hole at Proviso East HS. The 6-3, 200-pounder was a monster his senior year, averaging 27.9 ppg, 7.2 rpg, 3.6 apg and 3.0 spg and earning Illinois’ Mr. Basketball honor (his former Proviso East backcourt mate and current U. of Illinois standout Dee Brown won it the year before). The recruiting sages all had him among the upper crust of the Class of ’03. Top shooting guard. Top-three prospect overall. Mr. Can’t Miss. And he doesn’t even turn 18 until November. “He’s got great athletic ability, good ball skills and solid shooting range,” Izzo says. And, given Brown’s Iverson-esque game, that’s an understatement.

With all that going for him, it’s somewhat strange that Brown chose Michigan State, which has more guards than the average airport security post. The stocked MSU backcourt includes wing guards Kelvin Torbert (himself a former Mr. Everything) and Maurice Ager, combo guard Chris Hill, versatile wing Alan Anderson and another freshman, fellow McDonald’s invitee Brandon Cotton, who was considered one of the top point men in the country last year. So, why bother with such a crowded field and fight for burn, especially when lots of other schools would have promised Brown 30 minutes a night? Easy. “It’s just going to make me better and compete harder,” Brown says. “If you’re going to school because of what they have at a certain position, you’re not going to get better or get to the next level.”

That’s not to say Izzo will be able to keep Brown off the court. Don’t be surprised if there are times when four wing players (counting the 6-6 Anderson) are orbiting Spartan big man Paul Davis. Try contending with that lineup. Brown is excited about the prospect, but he’s happy to be at MSU no matter what, looking forward to becoming part of what he calls a “tight” squad and chilling with his new teammates off the court. Oh, and a challenge—he’s looking forward to that, too. “Nothing has been promised to me, and that’s what I want,” he says. “I don’t want anybody to give me anything. I want to earn it.”

And how is Izzo gonna get mad at that?