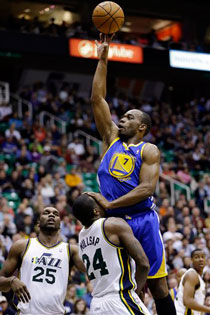 The fact that Golden State Warriors head coach Mark Jackson spit out the stats so quickly—and poignantly told me what the business is—in regards to David Lee and Carl Landry caught me more than off-guard. I felt like he was putting me and the world on notice.

“They did a great job. David had his 17th 20-10 (22 points, 12 rebounds) game of the season and leads everybody in basketball. Early on he missed some chippies, but he continued to grind, continued to battle, and he made plays. He showed why he deserves to be in Houston (for the All-Star game). As far as Carl, in 25 minutes, to put up the numbers (20 points, 7 rebounds) he put up, to be a force in the paint, to rebound the basketball and defend, plus set great screens? Those guys did a great job at setting the tone tonight and taking the pressure off of Steph Curry and our backcourt.”—Mark Jackson

While Steph Curry’s officially challenging Kevin Durant for the title of “best shooter in the world” and Jarrett Jack is vying for James Harden’s vacated title of Sixth Man of the Year, David Lee and Carl Landry are putting their own names in the hat for best frontcourt in the NBA.

Yes, the guy who came into the League as a small forward (Lee) and the other guy who doesn’t even start for his present squad (Landry) are a dual force of guile and savvy along with grit and determination. Per Basketball-reference, both men stand at 6-9, yet Landry’s much closer to 6-7, and on Wednesday night these two gentlemen gave the proverbial business to two of the best defensive bigs in the League in Serge Ibaka and Kendrick Perkins.

Let me expound on what I witnessed in bulletpoint fashion:

• Ibaka blocked Lee’s shots religiously in the first quarter, yet Lee remain unphased like a boxer taking his opponent’s best punches. Once Lee determined he could handle what Ibaka was serving, Lee went to work. A hook shot here, a flip shot there. One jumper, one tip back and whatever other crafty move Lee could dream up later, the stat sheet was filled. Ibaka looked weary at the end of the game, relieved that the game was over. (Although an elbow to the head from Kevin Durant might’ve also had something to do with that.)

• Landry might be evolving into David West 2.0. I swear this dude hit about five mid-range jumpers in a row and every time Perkins and Ibaka were scrambling to rotate to the exposed elbow. The interchangability (Is that word? I assume not, but it absolutely should be) between Landry and Lee to play high and low is impressive to watch.

• Landry and Lee are both 29 and in the prime of their careers, kudos to the Warriors’ management for acquiring their services during their peak years.

• I never once thought about what this team would look like if Andrew Bogut was on this team on Wednesday night, yet it was a topic of discussion with the media folks post-game. That buzz led to this response from Jackson when asked about the chances for a title run if/when Bogut returns: “I have no answers for an Andrew Bogut question. I know what he was in the past. And I know how he could help us. And we look forward to him one day coming back.”

• Mark Jackson is a verbal gymnast. Oh how coy you are sir.

• Festus Ezeli does a great job in just being on the floor. He takes up space, gets in the way and disrupts just by being a big man from Vanderbilt. He doesn’t score or rebound much, but he hardly ever seems out of place or to be making poor decisions.

The Warriors are the feel good story thus far in the first half of this ’12-13 NBA season, and there’s no reason to believe that this a fluke. Consider the fact that Bogut, worst-case scenario, will be a 15-20 minute backup center who will solidify the bench and make a thin rotation a now very deep one. Consider the fact that Harrison Barnes is still figuring a ton of things out with his game and shows flashes of brilliance at times. Consider the fact that this team is fun to watch, they’re a loose bunch, and they have absolutely nothing to lose.

You want your favorite Western Conference championship contender to draw this Warriors bunch? The gameplan to stopping them will be all about Curry, yet the quiet killer will be Lee and Landry, and as Oklahoma City found out the quiet ones are the ones you’ve got to watch out for. Because they’re the crazy ones.

Eddie Maisonet has been a contributor to SLAM since 2010. He is the Editor-In-Chief of The Sportsfan Journal and loves women who wear big hoop earrings. Follow him on Twitter to keep up with more of his shenanigans and tomfoolery.