Game more than notes: There can only be one king 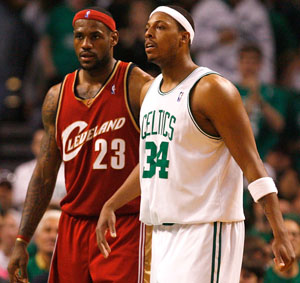 I don’t think I’ve ever sat in a rocking chair.  I don’t think the thought of grandkids has ever seriously entered my mind. That said, I have no doubt that one day, I will be telling some offspring of my offspring that I was there for Game seven in Boston and that I saw Paul Pierce and LeBron James go shot for shot in one of the greater duels in post-season history.

It’s very rare when something can live up to hype, but Pierce and James did just that, scoring 41 and 45 points respectively in carrying their teams in this pivotal game.  When the dust settled, The Truth dethroned the King as the Celtics pulled out the 97-91 victory over the reigning Eastern Conference Champion Cavaliers.

“One of those games, I had it going, LeBron had it going,” Pierce said.  “Just to be a part of something like this and be on the winning side is a great feeling.”

“Tonight was basically give the ball to Paul Pierce and get the hell out of the way,” an unusually personable Garnett said after the game.

In addition to going shot for shot, the two were seemingly well aware of the significance of their battle.  At one point, the swingmen were seen chatting to each other. “I said ‘Lets give the fans something to remember,” James recalled.

The fans came to see which guy was going to lead their team to the win.  These fans will finally have an opportunity to forget what Larry Bird and Dominique did and think of what Paul Pierce and LeBron James did.  This will go down in history.”

Like the fabled shootout twenty years prior between Bird and Dominique, this game will undoubtedly live on for quite some time.

“I look forward to seeing it on Classic in like three or four days, straight up,” Garnett said.

It was only a matter of time before the series featured a breakout game from LeBron James.  While Akron’s finest has performed well overall, he had yet to have the spectacular game everyone knew he was capable of.  Here in game seven, he did just that.  Coolly confident, James did all he could to will his team to the win. A barrage of jumpers kept his Cavs within striking distance late in the fourth.  Later, a steal and breakaway dunk from James trimmed a double-digit Celtics lead to just one with 2:20 left.

“Great players play great, they just do,” We were going to have to win a game where LeBron James was great at, and we did that tonight,” Rivers said.

For as great at James played, in the end, Pierce was just a little better and got a little more from his teammates to pull out the win.  The statement performance from Pierce comes at a time when the Celtics were struggling to determine their crunch time identity.  The question of ‘who takes the last shot?’ was loudly answered by Pierce who was aggressive throughout, answering every big shot from LeBron with a fall away jumper of his own.  When he wasn’t hitting jumpers he could be seen diving on the court trying to steal a jumpball tip and save a possession.  Simply put, he carried his Celtics on what is likely still his bad back to the Eastern Conference Finals.  Truth hurts.

Ultimately it was that footwork, on display in the myriad of stops-and-pops that fueled the Celtics win.

“Paul Pierce is one of my favorite players, as a fan. Second to Kobe Bryant he’s got the best footwork I’ve seen,” James said after the game.  “Just like Dominique I’ve ended up on the short end.”

Afterwards, KG traded intensity for affability during the press conference.
“Damn Truth!…Ohhh!….Damn shootout,” Garnet said under his breath as he reviewed the boxscore.  Later, as Pierce discussed his collision with a cameraman Garnett was quick to quip,  “That’s a helluva bruise boy. Sh*t, I should’ve ran into a camera.”

As KG and Pierce are sitting at the podium, happily soaking in the moment, you can here the faint yell of  “Lets go! You’ve got film to watch!”  The culprit, Doc Rivers who from a hallway beyond was jokingly waiting his turn at the podium.  Yes, Doc is correct to point out that this is only one step in the process.  Yes, tougher games lie ahead. And yes, they don’t raise banners in Boston for making the conference finals.  That said, its tough to get ahead of this moment.  A moment that will live on in post-season lore for quite some time.