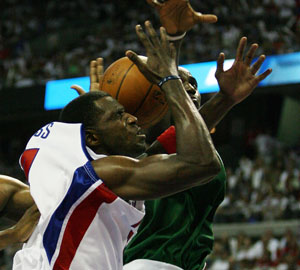 By Tim Darga a.k.a. TADOne

· The Pistons are 4-0 in games this year in the playoffs after losses. In other words, they have the Celtics right where they want them.

· I think John Hollinger is a nerd and all, but in his plus/minus rating system, the Pistons were -25 when Billups was in the game and +3 when Stuckey was in the game. Flip has said Chauncey will be on a shorter leash tonight if he isn’t performing, and I cannot say that I disagree.

· Let me get this straight: You’re team wins its first road playoff game, and you decide to start complaining about playing time? Bad form, Sam.

· Boston just needs to keep doing what they have been doing. KG is playing at an MVP level in this series. Sheed needs to have a big game tonight to slow Garnett down.

· Sheed hits the 1st shot of the game, and Ray Allen proceeds to throw it away on the other end.

· Role reversal? Detroit shoots out to a 10-0 lead, led by 8 points from McDyess and two Celtic turnovers. The Pistons energy level is noticeably higher.

· The Pistons are extremely active on the defensive end, seemingly getting a hand on every pass and shot. Paul Pierce looks frustrated early.

· Detroit is moving the ball from side-to-side and making the extra pass, getting clean looks at the basket. This is the classic Pistons basketball everyone has grown accustomed to, sharing the ball and finding the mismatches or the hot shooting hand.

· Boston looks slow pretty much everywhere on the court, even getting outhustled for rebounds on the defensive boards.

· The hamstring looks fine tonight. Chauncey finishes a sweet spin move with a short jumper from the paint. His defense has been even better.

· A Jarvis Hayes sighting! After an air ball three, his playing time might be short lived.

· Not in my house! Maxiell brings the fans out of their seats with an exceptional block from behind on a sure KG dunk.

· Hamilton gets caught on his Reggie Miller push-off move, and has to go to the bench with two fouls. The Pistons savior Rodney Stuckey checks in to a standing O.

· The free throw line is keeping the Celtics in a game they should be losing by double digits, hitting 11-11 from the charity stripe. The Pistons lead 22-17 after 1 quarter.

· Where is the pimp cane? Doc Rivers openly flirts with Michelle Tafoya on camera, telling her she looks nice in her dress and ignoring her questions about the first quarter. Don’t hate the player, hate the game.

· The Pistons continue to amp up the defensive pressure, blocking shots and creating turnovers. The Celtics have no answer and KG is oddly silent so far.

· Jason Maxiell is pining for more playing time by scoring, rebounding, and getting a sweet lob from Stuckey, serving notice to the Pistons youth movement.

· KG gets bailed out by the refs for his first points of the game.

· Somebody has awaken Kendrick Perkins, who gets entirely too demonstrative on a dunk.

· Garnett gets called for two straight offensive fouls, and is clearly perturbed. The defense on KG has been superb so far.

· Flip may want to explain to his team that Kendrick Perkins is an eligible player, and that they may want to put a body on him.

· For as active and dominating as Detroit has been in the first half, Boston is very much in this game, doubling up the Pistons from the charity stripe. They are only down four at the half, 43-39. This has to weigh heavily on the Pistons minds going into the half.

· BLAH, BLAH, BLAH. Not exactly sure what I expected from Stu Scott, Mike Wilbon, and Jon Barry, but I’m quite sure I could get the same info from reading a box score.

· Apparently, Chauncey and Kevin are friends as well. Is it too much to ask that TNT get exclusive rights to all NBA games, period?

· Detroit continues to bail out Boston by sending them to the free throw line.

· McDyess continues where he left off in the first half, and the Pistons defense continues to make life miserable for the Celtics on offense.

· While Chauncey is only shooting 1-8, his overall floor game and leadership have been impressive.

· Detroit begins to get frustrated by bail-out calls by the refs, and Saunders gets a tech complaining about the foul disparity.

· Both Wallace and Hamilton have four fouls apiece, and the Pistons are in the penalty with 5:56 still left in the third.

· Who wants it? McDyess wants it! He flexes his bicep to the courtside fans after hitting another shot. He already has a double-double with 19 and 12.

· The ebb and flow of this game has been choppy for both teams. Every time Detroit begins to blow the game open, Boston gets to the line and stays close. Regardless, the Pistons have lead the whole game.

· Posey hits a long jumper at the 3rd quarter buzzer, and Detroit leads by 7 going into the 4th.

· While praising the Detroit defense all night, Boston has played well on the defensive end as well. This is a game of attrition.

· Wallace picks up his 5th foul with 10:18 left in the game. If the Celtics are to make a run, now would be a good time.

· Sam I Am calls his own number on offense, shooting an ill-advised three and upsetting Doc. Neither team has hit a three-pointer in the game yet.

· Just as I mention this, Posey hits a corner three ball and the Celtics are within five.

· Maxiell has scored the last six points for the Pistons, filling in ably for Wallace and keeping the Celtics at bay.

· No Celtic appears to want to shoot the ball as Garnett, Allen, and Pierce pass up open looks on consecutive possessions. This looks like the team that the Hawks and Cavs took to 7 games.

· The Pistons go to a 3 guard lineup with six minutes left as Hamilton, Stuckey, and Hunter are all in the game. Billups is on the bench getting treatment on his hamstring.

· Detroit is getting hammered on the defensive boards and allowing Boston to stay in the game with multiple second-chance opportunities.

· Flip goes back to his starters for the last four minutes of the game, and Wallace proceeds to foul out Perkins and get to the line for the first time tonight.

· Chauncey hits the first 3 of the game for Detroit, and this is looking more and more like the Pistons night. They are up 83-73 with 3 minutes remaining in the game.

· Doc decides to go small, playing Posey at the “4” and applying full-court pressure. Allen misses two straight from the line.

· The Pistons smell blood in the water and are attacking, going on an 11-2 run. With a 14 point lead, all that is left to figure out is the final score.

· Boston empties its bench and essentially waves the white flag. What exactly has Leon Powe, who was so big in the Celtics first two series, done to not get any burn in this series? Doc’s substitution patterns are quite confounding.

· A Jarvis Hayes three puts an exclamation point on a 19-point win for Detroit, with the score not indicative of how close it was until the final few minutes. Detroit led wire-to-wire in this game.

Where was this effort from the Pistons in game 3? Mission accomplished for Boston as they go back to the Garden with home court back in their favor. If I was Boston, I would still be worried about their effort in this game and the fact they never had the lead. MVP of the game: Antonio McDyess. His spirited play stemmed all of the Celtics runs with big baskets or rebounds. His final line: 21 pts, 16 boards. This has all the makings of a 7-game series.