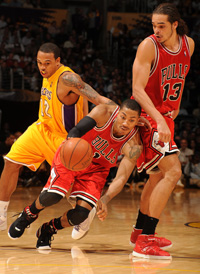 Pre-game, Phil Jackson says he doesn’t see any potential problems with Gasol coming back into the lineup, even though he’s had very little on-court with the Lakers. He also has this classic exchange with a Laker TV guy about the Bulls’ annual “circus trip”:

“This road trip, it’s given them some tremendous problems over the years.”

“Even when you were there?”

— During the game, Gasol makes his presence felt immediately, snagging the first of his 7 offensive boards and tipping in a miss for the Lakers’ first basket. Not only is Gasol a tremendous offensive rebounder, but the fact he never brings the ball down makes him a force when he gets the ball near the basket.

— Los Angeles wins the first quarter 25-19 despite Kobe, the League’s best first-quarter scorer thus far, going 1-5 from the field. Not only does this bode badly for the Bulls, but the rest of the League might be in trouble.

— Ten points for Gasol in the first 6 minutes of the game. He doesn’t look too rusty.

— Another playground basketball note about Noah-he will occasionally close out on people while yelling at the top of his lungs to try and distract them. Absolutely hilarious.

— Derrick Rose cannot buy a layup. He goes 2-11 from the field in the first half, with a lot of his misses at the basket after double-clutch, whirling dervish attempts. No whistles, and no buckets.

— Bynum has some trouble with the lack of space and Noah’s pesky defense, rushing some shots in the post and finishing 5-12 from the field. It’ll be interesting to see if this is just an adjustment or a symptom of Gasol and Bynum’s strengths overlapping.

— Kobe didn’t have his best game from the field, but was passing the ball beautifully, finding the open man from the post and finishing with 8 assists. His passing’s fallen off a bit this year, but with his full roster around him he looks like he’s ready to pick apart some defenses.

— Kobe also passes Kareem for second all-time on the Laker scoring list in this game-a great moment, and an amazing achievement. Now only Jerry West has scored more po

ints in a Laker uniform than Kobe.

— The 2nd unit looks completely transformed with Odom coming off of the bench.

— Hinrich played shooting guard alongside Rose in the 2nd quarter. Normally, I’m a big proponent of undersized shooting guards, but Kobe is one of the few guys in the League who can kill an undersized 2-guard. He takes Hinrich to the post every single time, and Kirk ends up with a game low -20 +/- in only 26 minutes.

— If you’re wondering whether or not members of major publications give each other crap about how many twitter followers they have, the answer is a resounding “yes.” By the way, twitter and live-blogging make press row feel completely different from only a season ago.

guard. Another good moment was the first time he went to the line-a small contingent of Laker fans booed him because he played with the early-decade Kings, while most of the building just didn’t care all that much.

— Bright spot for the Bulls-the ultra-long rookie James Johnson blocked a Kobe jumper, which almost never happens, and used his length to get a post-up basket just before garbage time officially began. He’s got some tools.

— After the game, Kobe says the Lakers “Didn’t miss a beat” with Pau Gasol back into the lineup. Considering the Lakers won an NBA championship the last time Gasol officially suited up as a Laker, the rest of the League should be very afraid right now.