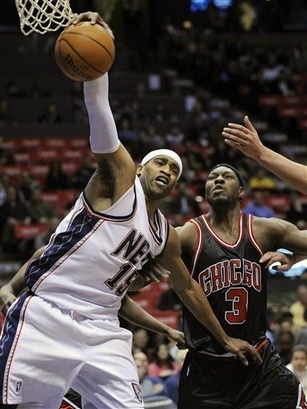 My one major point: If this game turns out to be more of a trend than an aberration, the Kidd deal looks like this:

On to the notes.

–Gary Sussman sez sits in a corner of media room, sipping tea and practicing, “3-ball side-pocket, DESAGNA DIOP!” This may not have actually happened.

–It’s 80’s night at the IZOD center. As such, the Nets handed out Def Leopard cassettes, short shorts and crack pipes to the first 10,000 fans.

–It takes the Nets almost three minutes to score their first bucket.

–RJ jackknifes through the lane and throws it down to the delight of his surrogate father, Bill Walton. Two dunks for Jefferson and some visible emotion from VC already. 9-6, Nets.

–VC goes baseline past the pesky Thabo Sefolosha and flips in a pretty runner. After a Chicago miss, Carter goes baseline off a nice look from RJ and scores again. 13-7.

–The Nets are going at the rim and the Bulls are consistently shoving it back.

–Aaron Gray just checked in. Thought you should know.

–Aaron Gray just slipped a pretty bounce pass to a cutting Ben Gordon, resulting in a foul and two free throws. Did I know that Aaron Gray was so so deft with the precise bounce passes? I did not.

–While we’re talking about Aaron Gray, it’s worth noting that he could eat Sean Williams.

–While we’re still talking about Aaron Gray, Darrell Armstrong just lobbed a bounce pass in to Richard Jefferson and Jefferson crashed into Gray. RJ might as well have hit a brick wall. Jefferson hit the floor so hard; it drew “ooohs” from the crowd.

–Marcus Williams is making things happen, creating for others. 48-44, Nets.

–Mo Ager checks in for Josh Boone for the final 23 seconds of the half. Ager before Diop? Really?

–VC hits a running 3 as the buzzer expires.

–The Bulls get right back into it and take the lead on a vicious (for him) Joe Smith dunk. 54-53.

–Deng pins Jefferson down on the low block and the help rotates too far away to be able to recover and make a play. Deng converts a contested layup off a pretty spin. 60-56, Bulls.

–Ben Wallace gets sandwiched, then rejected (fouled?) and curses at the refs on his way back up the court, picking up a tech in the process. You’ve gotta love veteran leadership.

–Two minutes let in the period and Ben Gordon just woke up. To be expected after two weeks without playing, I suppose.

–VC hits a pretty lefty scoop to end the period.

–Vince has done a good job of finding Diop open underneath the rim since Diop entered.

–Tyrus Thomas flies over everybody and for a tip in. 79-all.

–Chris Duhon drives the lane, absorbs a hit and sticks a tough layup. 85-81, Bulls. A VC 3 and a Marcus Williams pull-up put the Nets up 1. After Duhon finds Nocioni for another jumper, VC hits another 3. Marucs Williams dribbles out of trouble and calmly wets a midrange pull-up. The crowd is pumped.

–Josh Boone has a game high 15 boards so far.

–After a Duhon/Joe Smith screen and roll leads to Smith being surrounded in the paint by Nets, Hassell strips him. Two things: 1) Heads up play by the new pickup, doing exactly what he was brought here ended up here for. 2) If you have Ben Gordon, Luol Deng, Andres Nocioni, Kirk Hinrich, etc. and your late game offense is reduced to a Smith/Duhon high screen and roll, what does that say about how your real talent is producing? Yes, the Bulls have been hit by injuries, and yes, Duhon and Smith on this night were playing the best ball out of all of the Bulls, but…you know what, nevermind.

–Joe Smith slips backdoor and Duhon finds him for the uncontested dunk. 94-93, Bulls.

–VC is fouled going up. It’s like 2001 up in here: Vince and everybody else. He bricks the first. Makes the second. Tied.

–Broken play. The Bulls can’t get a shot off. Overtime.

End of regulation: 94-all
Overtime

–And-1 for Marcus Williams. Gotta admit, MW is nice when it comes to circus shots. Bricks the FT.

–A bunch of crap.

–Ben Gordon banks in a floater while taking a hit. And-1 opportunity. BG misses the FT. More than halfway through the overtime, the overtime tally is less than the Celtic-Barcelona Champions League fixture from earlier today. Defense that forces missed shots is gross, though also admirable. I’m just saying.

–RJ drives through the lane, virtually unguarded, and finishes the up and under layup.

–Marucs Williams rips the ball away from BG and throws it ahead to RJ, who’s fouled. Hits the pair. 100-96.

–Lawrence Frank is candid in his postgame press conference, praising VC and RJ for their leadership and play, and noting that, while they’re still looking for consistency, Marcus Williams really impressed tonight.

–Desagna Diop temporarily jacks one of VC’s 37 bottles of lotion. Desagna Diop is awesome. If he could somehow fuse himself with Boki Nachbar to create Boki Diop (Desagna Nachbar?), every single person that’s ever watched basketball would have a new favorite player.

–From the surreal, “did that just really happen?” file: As I was editing my notes in my seat after the game had ended, a woman in her late 20’s/early 30’s was on her way out and, for some reason, felt compelled to shout over to me while I sat hunched over in my seat, typing.

“Um, thanks,” I shot back awkwardly.

Yeah, that would have been fresh. Really fresh.