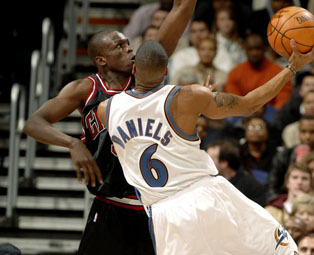 A frigid D.C. night, good defense and ugly play. That about sums up the Wizards-Bulls game last night. It was a match-up of two of the Eastern Conference’s best, which probably speaks more to the big divide between the West and East rather than the quality of both teams. I arrived to the press room and the place was flocked with media. I was sorta surprised how many people were covering the game, so many that my seat was already jacked by the time I got upstairs. I didn’t sweat it though and took a seat closer to the action downstairs.

1st Quarter Summary:
For anyone who hasn‘t seen the Wizards they are basically an up-tempo team who play zero defense but constantly attack the basket and shoot 3s. Due to that fact almost all of their players end up out on the perimeter and take turns driving to the hoop. The Bulls played what could become the prototype for guarding Arenas. They stuck Hinrich in his face and every time he’d drive all five guys would back up and completely close the lane to draw a charge. This pretty much shut down the entire Wizards offense. Although the Bulls D started off pretty solid they couldn’t get much going offensively. Both teams were missing shots and Gilbert was getting frustrated, drawing a charge in the first quarter trying to force the action. Six minutes into the game its 11-4 and the Wizards have only attempted five field goals and haven’t hit one yet. After a huge Ben Wallace block on Jamison the Wizards get it going hitting a couple shots to take the lead 16-13. Scott Skiles hops off the bench looking like he’s about to strangle someone as Arenas gets an inbounds pass with like 3 seconds to go and tries to heave it as Hinrich commits the foul. I don’t think I’ve ever seen a play like that before. After the game Arenas says, “I heard Skiles say they had a foul to give so when I heard him say foul after I took the first dribble I threw it up.” Add the tech on Skiles and Arenas gets a four point play extending the lead to 27-18. Both teams shot horrible but the Wizards made up for it at the line.

-Eddie Jordan finally decided to switch up the offense and brings in the second unit with Etan Thomas and Antonio Daniels to start the second half. This actually proved to be a good move because they were able to play some inside out ball and Daniels started finding lanes to the basket.

-Daniels just got rocked by a pick from Michael Sweetney, who looks like he should be playing for the Bears rather than the Bulls.

-Jarvis Hayes hits a couple of threes but the Bulls are hitting shots as well and have evened things up at the line.

-All the starters are back with Daniels at the point. Daniels again being aggressive hitting an off-balanced three.

-Antonio Daniels is the story of the game making another good move and drawing a charge on the defensive end.

-Big Ben Wallace is fired up and gets a tech for cursing at the ref. Somehow the score is 94-82 Wizards.

-Wizards can finally put them away as Caron does a great hesitation move to give the Wiz a 14 point lead.

-Game’s over as they call a flagrant on Nocioni. Definitely not a flagrant and the refs were somewhat questionable tonight.

Honestly, this is a game the Bulls should have won but they missed so many good shots in the opening period that the Wizards got back in the game. Free throws helped the Wizards early as well as some late shots from Arenas. They are gonna have to adjust quicker to the type of defense the Bulls played and the slower tempo come playoff time. Otherwise they’ll be dead in the water once someone slows the game down or cuts off drives to the basket. After the game reporters swarmed Wallace asking about his tech and he just stated it wasn’t a foul and jokingly said they were trying to put him in the same boat as Ron Artest. I chat a bit with Ben Gordon about Hiphopsodashop, an internet café with a hip hop theme he’s planning to open, and get a couple quotes from Hinrich before hitting the Wizards Locker room.

By the time I get in, Arenas is already in full form. You can definitely see the makings of a superstar as he talked about realizing he was forcing his shots early, started to play off of his teammates and took over late in the game once things started to open up. That’s just smart basketball. One reporter asks him how he would rate his swag tonight and he responded, “It was a mellow swag tonight.” Then like the guy who runs a joke into the ground he asks if there is a scale of swag and if phenomenal is the top. Someone smack this guy with a towel.