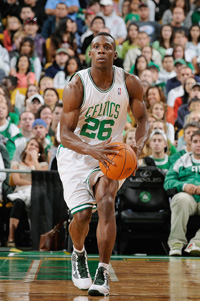 Every basketball fans knows about the mental toughness Dwyane Wade has shown on his way to becoming a basketball superstar. Heck, even Kevin Garnett got into the mix last season by talking about his tough childhood into a commercial.

So when is Lester Hudson going to get a chance to tell his story to the masses?

Who is Hudson? Despite having one of the most inspiring sports-related stories since Rudy, few sports fans, let alone basketball fans, know about what he has overcome to earn a roster spot on the Boston Celtics this season. Hudson started playing the game of basketball when he was 18, was forced to sit out his last season of high school basketball due to academic issues and then bounced from a community college to a little known Division I school.

A second round pick is no big deal, right?

During his freshman season at Tennessee-Martin, the talented guard hung 35 points and 10 rebounds on Derrick Rose in front of his family and friends in Memphis. While that would be the highlight of a freshman season for most players, Hudson recorded the first quadruple-double in the history of the NCAA in just his third collegiate game.

“It was a great feeling,” a stoic Hudson said, when asked about this milestone. “I didn’t really think I had it a first. But it’s a very good achievement for me.”

Hudson’s career has continued to pick up momentum since that highly successful freshman season. Last year he nearly beat Stephen Curry for the NCAA scoring title and was drafted in the second round by the Boston Celtics. Despite averaging a pedestrian 5 points, 2 rebounds and 1 assist in Orlando this summer before breaking his left index finger, he showed enough promise to warrant Boston’s front office inking him to a guaranteed deal for this season.

After having Division I coaches bail on him due to academic issues,

Hudson appreciates an organization finally showing faith in him.

“One thing I know is that I’m blessed because a lot of people who are in my position and go in the second round don’t get a guaranteed deal,” the humble Hudson said. “I just want to keep working hard and showing people I can play.”

Despite the faith the front office has shown in Hudson, when Doc Rivers was asked before whether Lester Hudson could see some minutes this season, he frowned, paused and then spit out an answer Hudson won’t want to hear.

Not the kind of words that send out a ringing endorsement about the rookie’s chances of earning some burn this season. But what’s a little more adversity to someone who has already overcome so much?