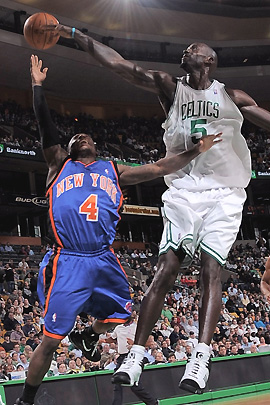 This is one of two posts from last night (there’s going to be more on Allan Houston later because–since he only played seven minutes and Fred Jones was the first guy off the bench–it’s safe to assume he deserves a proper career eulogy), but just know that the Celtics were blowing out the Knicks by so much that I accidentally doodled a bird in my notebook. It was like 7th grade algebra. This was not supposed happen in the Boston Garden. No. Not in my lifetime.

– You know days are good in the Garden when Doc Rivers is taking potshots at last year’s team and the season hasn’t even started yet. A reporter asks Coach if Esteban Batista, who was cut Tuesday, would have made the team last year. He says, “yeah, definitely” and laughs in an I-can’t-believe-I-lived-through-that-era-of-my-life sort of way, like he’s staring at yearbook picture from 30 years ago.

Tommy: “You ever heard of this ‘nano-technology?’”
Woman in group of assorted elderly: “No, I’ve never…”
Tommy: “It’s just little machines.”

That was it. That actually happened.

– I accidentally have dinner with a team physician and Tommy Heinsohn’s wife, Helen, and am immediately outclassed. The doctor tells me he sees SLAM on the floor in his bathroom every couple of weeks, which is to be taken both as a compliment and mildly disconcerting.

– Eddie House is the only guy shooting 3s in the layup line.

– KG gets introduced for the first time and it sounds like a playoff game in here. I don’t think I’ve ever heard this arena this loud and, remember, it’s October 17th.

– Zach Randolph trots out and he’s lost a ton of weight. He’s bouncy and looks – dare I say – wiry. Eddy Curry’s rehab stint, on the other hand, was apparently at the Outback Steakhouse.

– Third Celtics offensive possession is the vision Celtics fans have had in their head since the first week of August: Pierce on the elbow extended, dumping it down to KG on a post-repost. The Big Ticket bricks horribly, but it doesn’t seem to matter – fans are just contented that he’s wearing home whites on Causeway Street.

– The rims aren’t mic’d for some reason and it’s freaking me out. Remember last year when the Mavericks did a game with no music and reports said it was boring as all hell? Imagine the opposite: they’re blaring C+C Music Factory and there’s no payoff for when a ball gets launched to a basket. I feel like I’m in a club in 1989.

– Eddie House is the World’s most affected point guard. He has some court vision and is definitely the right size for it, but Marbury presses him full-court and all of his hair falls out. He’s Rondo’s only backup, so they have to figure this thing out before he develops an ulcer.

– Ray Allen has been watching Mike Conley Youtube videos. He’s a lot more confident going strong off the dribble with his opposite hand this year and he makes his second dribble-drive lefty layup to make the score 24-15, Celtics. Well, this is all against Quentin Richardson. So I probably just wasted your time.

– Nate Robinson checks in and suddenly NO ONE IS GOING IN THE PAINT.

– I think Lendale White ate all of the food at USC before Gabe Pruitt got there and he had to subsist off of nuts and berries for the past year. This guy needs to gain 20 pounds before he can play in the NBDL.

– As long as Scot Pollard is Scot Pollard, I wouldn’t be shocked if Leon Powe gets 15 Mark-Madsen-scrap minutes next to KG every night.

– It’s already a 15-point game, so I’m heading over to Dana Barros to get some good KG stories. Dana has been doing some front office and PR stuff for the C’s since he retired and was at practice last week when he got the typical Kevin Garnett Experience:

“When I played against him, I always used to hear how focused he was. But in practice, I was watching him shooting last week and he made like 17 jumpers in a row – just lining ‘em up and knocking ‘em down. Then, after about the 20th shot, he misses one. And he flips out. It’s just him and two coaches and he completely flips.”

After what Manny Ramirez said yesterday, I figured this story needed to be told.

– (Dana then says he wouldn’t be surprised if KG averages like 10, 10 and eight this year – the eight being assists. I thought he was kidding, but the C’s ended up with 27 assists last night. So maybe he wasn’t.)

– Rajon Rondo does his patented move: blow by one defender with his quickness, put some pretty move on the helpside defender then throw up some wild, heaping flail towards the basket with hopes that the backboard will slant like it’s in an arcade and drop in. This time it’s a baby hook. Dana says he “looks like Hakeem the Dream.” I think he looks more like “Vladimir the Stepania.”

– This Brian Scalabrine-David Lee matchup looks like the set of The Island of the Misfit Toys.

– It’s 50-35 at the half and KG, Allen and Pierce have 33 of the 50. They’re two short of the Knicks by themselves. Lang worries about the Celtics depth, saying they have the worst 4-12 in the NBA, but I’m not sure it’s going to matter, even if it is true.

– Brian Scalabrine is immune to foul calls all of a sudden. This should help his career tremendously. Either that or Eddy Curry is developing the implicit, unwritten Shaq Full-Contact No-Foul rule, which sucks because he’s never going to be on that level.

– It needs to be made clear, though. Eddy Curry is out of shape. Even more out of shape than he was in Chicago. And that’s not really something he can afford.

– Brian Scalabrine still gets mock applause for making threes. See, this doesn’t work. Scals shot 110 threes last year. It’s no longer ironic. This is like people wearing piano tie tee shirts or listening to LFO. If your ironic idea is shared by several thousand other people on an almost-daily basis, then it is no longer ironic. It is novelty at that point. You’re just encouraging him at this point.

– Jamal Crawford would be a perfect Piston. Or really a perfect anything-else. But this guy is an All-Star in that system, even coming off the bench. Like everyone not named Curry, Marbury, Richardson or Robinson, he’s a waste in a Knicks uniform.

– It’s a 30-point game. I’m bored again, but seated next to David Aldridge. This is a big deal to me and anyone who grew up in my generation can sympathize: he was the NBA guy. You didn’t trust anybody on trade rumors until DA said it. Then the Internet came and we got rumors everyday from Lang and Marcel, but he was the only guy who got it right 99% of the time back then. You hear people in past generations talk about Peter Gammons this way and it gets stale, but it’s true.

So when he tells me that Kenyon Martin looks like he’s about to eat the Northwest for breakfast off of put-backs and that he’s better than he’s ever been, I believe him.

– We talk about David Lee. We agree on these three things and it should be written in stone: 1) He’s one of the three best players on that team. 2) We have no idea if he can last 40 minutes a game with the type of punishment he takes from helpside defending alone. 3) He deserves the chance to try it anyway, and it’s not going to come as a Knick.

– Pierce-to-KG, who touch passes it to Allen on the break for a midrange jumper. This is like playing NBA Live against your infant brother who has yet to develop motorskills and doesn’t know the rules of basketball. Its 70-43. Here comes Dahntay Jones.

– Oh, one thing I forgot to mention in the pregame notes, James Posey is going to play some 4 this year. That is until Doc Rivers figures out who James Posey is.

– Dahntay Jones just soared through the lane and missed a putback dunk that would have guaranteed that he made the team.

– The Knicks have the most likeable benchwarmers: Demetris Nichols (politics are going to send him to Europe, which sucks because he can play right now), future Euroleague superstar Jared Jordan, and my grandfather Malik Rose. Happy 81st, Gramps!

– It’s 83-48 in the 4th quarter. The Knicks, who are shooting at a 22.5% clip, have scored two points in the first four minutes of this quarter. Zach Randolph, savior du jour!

– The scoreboard says, “ZAL-TOR.” I know the NBA is trying to expand, but having the Raptors play space aliens is absolutely ridiculous.

– Big Baby, who just spun through the lane and made a lefty lay-in, may actually work in this league on a team like this. He dives after balls with four minutes left in 32-point games and people give standing ovations to that kind of useless stuff around here, even if you don’t get possession. He has found the right city.

– Who the hell is Walker D. Russell who let this little boy past security?

– James Posey has been wearing his headband like a yarmulke for the past two quarters. Boredom has apparently converted him to Judaism.

– This is the happiest KG has ever been. He’s joking about getting lost on the highway. He’s smiling throughout the entire postgame press conference. He looks happy to be answering questions. Something is up and I like it.