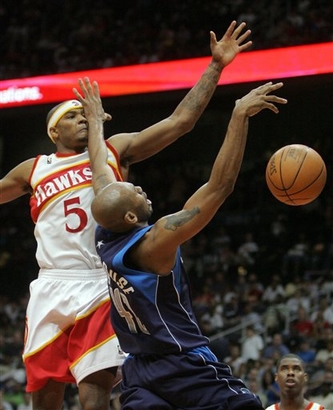 On friday night I flew down to the ATL for Tyrone Corbin appreciation weekend, and while I was there I took in the Mavs-Hawks.

Pea Soup, A-Town down! Here’s what went down:

I think today is 80’s day at Phillips, which is somewhat appropriate given the warm, enjoyable temperature outside. Damn, it was nice to get away from the Big Apple’s fluctuating climate for a weekend.

–The food in the media room varies in quality. The potatoes are good and even the Hawks can’t mess up a raspberry Danish, but the eggs aren’t edible, and I didn’t go for the “buttery grits” because they had “buttery” in the title. B-

–Probably due to the aforementioned 80’s day, the Hawks come out to the Hall and Oates classic “I Can’t Go For That.” Can’t go for what? Winning?

–The classic 80’s Hawks video “Nothing Can Stop Us” that Lang linked to a while back is played on the jumbotron before the starting lineups are announced. That’s class.

–I’ve never seen so many luxury boxes before in an arena. Maybe it’s deceiving because they’re all stacked on top of each other.

–Even though the game is a reported sellout, a minute prior tip, much as you would expect, Phillips feels very empty. The black seats don’t help either; the contrast between the bright arena light and black seats makes it impossible not to notice the empties like a green lawn littered with beer cans the morning after.

–Spirit, a real hawk, flies down from the rafters (or somewhere else) to rev the crowd up. It doesn’t really work, but it’s always cool to see real live Hawk.

–As the players come out on to the floor, Anthony Johnson gives hearty embraces to his former teammates and then, with this funny expression on his face, points at Mark Cuban, as if to say, “Damn man, I can’t believe you guys traded me!”

–It’s 4-0 before I even look up, and 6-0 as I write 4-0 down. Suffice it to say, Erick Dampier is dominating early and Devin Harris is distributing.

–The Mavs are just picking the Hawks apart. Josh Howard is really freaking good. After seeing him live twice in the same week, I can’t believe that he needed players to get injured in order to make the all-star team. He’s just a complete player. As the Mavs jump out to a 19-8 lead, they space the floor well and work the ball around unselfishly, often finding the perfect shot. It’s not even 2pm, the team is on their fifth stop on a six game trip (all wins so far), and they’re crushing their opponent. Simply put, they’re ready and well coached.

–Howard might be the best back door cutter in the entire league. He might be the best cutter in the league, period. Part of why it’s obvious that Dallas’s offense works is that the when people need to move, they move. They’re very rarely stagnant. You’d think this would be obvious, but I can’t tell you how refreshing it is to watch after spending the better part of this year watching the stationary Knicks Eastern Conference late in the shot clock.

–I hate to sound like a broken record, but the Dallas team passing is outstanding. The ball zips around quickly, putting the defense on its heels. This helps the Mavs find holes in the Atlanta D while Hawks try and keep up.

–Josh Smith goes 1 on 3 and throws up a terrible brick. He would finish a very un-Smoove 7-19, often looking a bit selfish on the offensive end, though without Joe Johnson it’s understandable that Josh would try and shoulder much of the load.

–The Hawks don’t take a single a three in the first half; so much for being multi-dimensional.

–A late run cuts the Mavericks lead to 14 at the half. If I’m Avery Johnson, I’m pissed off right now. The Mavs shoot 56.8% from the floor, and hold the Hawks to 34.2%. The Hawks have been able to stay relatively close thanks to 18 made free throws. Give them credit, at least they’re trying.

Tell him a real man would show his face in Phillips Arena once in a while instead of just writing about online. Tell him I’m going to light his ass up. (Not quite sure what to make of that, though he did say it with a laugh.)

–An Anthony Johnson jumper brings the Hawks within 7. The crowd shows its first sign of life.

–Whenever the Mavs shoot free throws, the Hawks PA announcer softly says, “Thuuuuuuuunderstiiiiiicks,” to the crowd. This has gotten increasingly annoying.

–Devean George and Greg Buckner are shown on kiss-cam, but choose, understandably, not to make out.

–The Hawks play stingy D in the third, using their length to cause turnovers and disrupt Dallas’s flow. The Mavs end up scoring 17 in the period after putting up 19 in the second. Those 39 first quarter points are looming large.

–I think Tom Gugliotta is sitting two rows in front of us in the crowd but I’m not sure.

–Josh Childress is impressing. He plays solid D and is getting buckets any way he can for his young, shorthanded and somewhat confused looking squad. His length is a big factor on the defensive side of the ball, and if anything, his afro is fun to look at.

–Tyronn Lue hits a pretty, twisting layup (And-1) to bring the Hawks within 4.

–Zaza Pachulia ties the game with two freebies and a Childress dunk gives the Hawks their first lead at 81-79. It’s all downhill from there. The Mavs begin to click: Jason Terry hits a barrage of clutch 3’s and jumpers and Dirk drops in a few daggers. A comeback that looked so promising is vanquished with ease by the league’s best team.

–It is Tom Gugliotta! Such crappy seats for an ex-player. Anyway, his wife/girlfriend begins to lovingly caress his perm with her left hand. Even more interesting is that there are two of them. Could it be Tom Gugliotta’s harem?!?!?!?! I can’t tell. I can tell that the girls he was with were nothing compared to the girls at Hooters on Peachtree Street, though they probably eat better.

–The Mavs win going away. Dirk, Howard and Terry combine for an unstoppable 83 points.

–After finally watching him live, I think Marvin Williams has the potential to be a very good player if he ever asserts himself. He is Marvin Williams.

–Dirk to Dampier: “Damp, holla at a playboy!”