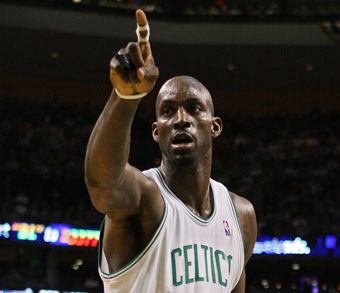 All eyes are on the draft lottery.  Screamin’ Stephen A., among others, is displeased as the Knicks slot is announced at just number six.

Someone must have told the catering crew that it was a big game as the Vanilla Ice Cream is dyed green.

Out on the court, the Detroit-Boston rivalry is rehashed on the jumbotron.  Though as the players are introduced, the elaborate pyrotechnics are noticeably absent, score one for the Commissioner.

Out the gate, Flip is looking out for his point guard’s tender hamstring.  Instead of guarding the quick Rondo, Billups sets up on the shooting guard formerly known as Ray Allen while Rip draws the Rondo assignment.

KG scores the first four Celtics points.  Elbow jumper followed by a turnaround off of a drive on Sheed.

Jesus. Ray Allen does something to positively impact his teams chance of winning a basketball game. Doesn’t settle for the jumper – drives by Rip, Chauncey and drops in drops it in over ‘Dyess.  8-0 Boston,

Off a second shot opportunity – Chauncey hits 3 to put Detroit on the board.

Pierce penetrates, Lays it in on the left side over Rasheed, 12-6.

Dice skies – relatively speaking of course- for tip in.  Next time down, Dice follows the putback with a jumper to pull Detroit within one.

Allen misses, again.  This time Ray rims out on a pull-up jumper over Rip in the paint.  Celtics trying to get Ray going – so far to no avail as he’s missed all four of his jumpers from the field.

Back to back buckets from Allen.  The first on a fastbreak dunk, the next from right under the paint courtesy of a feed from Rondo.  The jumper is still M.I.A. – baby steps I guess.

Celtics second unit offense comes out flat as House over-dribbles his way into a turnover. Next time down, Posey misses a forced floater.  On the other end, Detroit’s second unit faring slightly better as a pull up by Stuckey ties the game.

KG and Sheed are waging a heated battle for position.  At one point, Sheed sets up right wing, faces up.  KG crowds.  Sheed drives by him for the slam.  Next Detroit possession, the two are back at it again.  This time KG picks up the personal with a push to the back.  Sheed hits two freethrows to knot the score at 32 halfway through the second quarter.

Don’t jump – Prince headfake sends Pierce flying.  With the clock ticking down, he calmly buries the three from the right wing to put Detroit up three. Prince follows that up by posting Pierce and extending his inspector gadget arms for a hook over him, 39-35.

For the umpteenth time Allen drives to the paint, then proceeds to drive through the paint, bringing it back out on the other side of the court. This time Ray’s lack of assertion eventually leads to a Perkins turnaround, 39-37 Boston.

Fans chant “Chauuunnn-cceeeeey” as Mr. Big Shot strolls to the line.  I never understood this chant. Yes, that’s the man’s name – will saying it slower really throw him off of his game? Regardless, he hits 1 of 2 freethrows, 41-40 at the half.

Celtics aggressively attack the basket as Pierce takes it through the heart of the Pistons D for lay-in.

Garnett left open on the perimeter.  Once again makes the Pistons pay, hitting the 20-footer to put the C’s up 6.  For Garnett, that makes five out of his eight field goals that are from the perimeter.

KG sets up in triple threat on Sheed. Spins, and fades away for the jumper, wet. 54-46.

Sheed goes to the bench after picking up his third personal on a questionable call.  What appeared to be a clean block of Perkins.

Allen misses the three in transition.  So far he’s looking at a line of nine points on 3-8 shooting and still hasn’t hit a field goal from outside the restricted area.

Rondo penetrates, hits over outstretched arm of Maxiell.  Not quite his finest encounter with Maxiell, but it’ll do.  58-50 Celtics.

Bill Belich-eater, sitting in Tom Brady and Jay-Z’s old seat, gets a resounding ovation from the Boston crowd.  The Pistons would be wise to be on the lookout for any suspicious cameras at Wednesday afternoons practice.

Rivers has constantly bemoaned the Celtics inability to close out quarters this postseason. Ending the third quarter, the C’s did just that extending a six point lead to 12 over the last four minutes of the period. Pierce leads the way during this stretch hitting another two fall-away jumpers.  Mr. Tommy Point Eddie House caps it off, draining a three from the left wing to give Boston their largest lead of the night as they head into the fourth.

Sheed takes his time setting up on PJ Brown faces up – hits jumper, 71-63.  Next possession, Sheed does the exact same thing – face up, jab steps and hits the pull up. The two jumpers were the first buckets for Sheed since his second quarter slam.  73-65 with less than eight minutes to go.

Pistons lack any semblance of flow on the offensive end. Ultimately, in the rest versus rust debate, this performance looks like a victory for rust.  Back to back turnovers give Detroit seven for the nine for the second half.  To put that in perspective, they had just three turnovers in the entire game of their game five win over Orlando.

Point the finger to Chauncey and Rasheed (dealing with injury and foul trouble respectively) for struggling to get anything going against the Celtics defense.  Despite this, the Pistons keep the game within reach.  Stuckey hits a baseline jumper to pull them within six with under six minutes left.

Chauncey drives by Rondo, drives untouched the rest of the way in for a lay-up, 77-71.

Pierce up top, drives right and pulls up for another jumper, 81-73.

Rondo left open from the baseline.  Jumper puts them up 10 with 2:40 left.

Next time down, Allen drives, kicks it out to the open Rondo behind the arc.  Double-R hits the 3, 86-75 with less than two minutes left.  When the guy with the suspect jumper who has only taken 19 threes the entire season hits two long jumpers, it pretty much means the game is over.