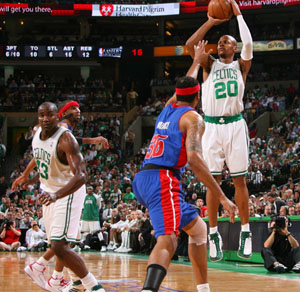 At this point, noting is surprising in this series. The Pistons went from snatching away home court advantage to being humbled at home. On the other end Three the Hard Way has yet to put together a string together dominating performances that would give them a firm hold of this series. And yes, despite an anemic post season thus far, Ray Allen is still playing the role of Fred Williamson. As Doc and others frequently say, game fives are like mini game sevens. Seeing as how the winner of game 5 goes on to win the series 83 percent of the time, there is a lot on the line, who shows up for either team is anyone’s guess.

In the series where momentum is non-existent and stars rise and fall from game to game with no rhyme or reason, nothing about the Celtics 106-102 victory should shock anyone. The fact the Celtics pulled ahead by 17 only to have that lead cut to one; That Boston would out-rebound the Pistons 42-35; That McDyess would follow up his 21 and 16 with a quiet four points and five boards; That Double-R would pull down more boards than Sheed, Dice or Tay; Or – most importantly – that Kendrick Perkins would channel his inner Charles Barkley, and dominate the paint to the tune of 18 points and 16 rebounds.

Somehow, all of that makes perfect sense as the Celtics were the aggressor from the tip and held on down the stretch to pull them 48 minutes from a trip to the Finals.

Here’s how it went down.

Sheed hits a three from the corner. The epitome of the mixed blessing – on one hand, Sheed’s now likely to be much more invested in the game, on the other it means he probably wont be mixing it up down in the post anytime soon. 5-3, Pistons.

Celtics break ends with a RayRay pull up three. Looks like there may be some luck in that new shooting sleeve that Ray is rocking. Next time down, Pierce connects on a spinning left hand layin to extend the Celtics lead to 5 and force a Detroit timeout.

Billups hitting a three – good. Billups passing up a lay-up to pass it out to Flip on the sideline – bad.

Sheed hits another three, his third of the game so far. This time Philly’s finest was left wide open on the left wing and hit to pull Detroit within one, 17-16.

Back to back buckets for P-squared out of the Boston timeout. The surge is short-lived as consecutive turnovers lead to a Maxiell bucket and then 2 free throws from Chauncey, 21-20.

Perkins takes feed from Pierce, reverse lay-in. That makes 10 and nine for Kendrick. Thus far he’s the most active player on the court by far, controlling the glass on both ends while also keeping Dice and the other Piston centers in check.

On the other end, Maxiell tries to get something going for the Detroit frontcourt. Maxiell soars for a lob pass but is knocked down by PJ Brown. A hard foul from the old-school vet, but it probably wouldn’t have been a flagrant back in the Clinton era.
Later, Sam Cassell earns himself a one-way ticket back to the bench as Hunter picks his pocket and lobs it up to Maxiell for the slam. Next time down, Maxiell is fouled by PJ again on yet another lob attempt. Moments later, after picking up his third personal, Ratliff checks in for Maxiell, I think we wont be seeing lobs for a while.

So much for losing all his dignity – Ratliff cleans up a Stuckey miss with a putback slam, 36-31 Detroit.

Back to back threes, Pierce then RayRay, turn a four point deficit into a two point lead. Most importantly, according to the jumbotron, we have escalated from “wicked loud” to “thunderous” levels.

PerkIsABeast.com. Putback puts the Celtics up 4 and gives the stout center 12-11 so far.

Walter Herman wins the award for player on the inactive list most likely to be mistaken for an extra from Scarface. The Fabio double is sporting a tan suit, no tie and his shirt collar lapped over his blazer’s collar. He may in fact have been moving weight with Sosa in a former life.

Perk across the lane, hits the hook shot. 54-46. Moments later, he pulls down the offensive rebound, posts McDyess and hits the short turnaround. Whatever he had for breakfast, Doc will make sure he keeps on eating it.16 and15 for Perk.

RayRay is in the building. Back to back threes for Allen extend the Boston lead to 14.

“He still sucks but he’s a beast tonight dude,” says the Bibby-esque Celtics fan sitting behind me.

Consecutive stupid cross-court passes are smartly and easily picked off by Boston. You mean to tell me a Detroit Pistons team plays below their ability level at a critical juncture in their season. Meanwhile, behind RayRay, the Celtics pull ahead by 15.

Stat of the night scrolls by on the jumbotron, Rebounds Perkins 16 – Pistons 15.

Allen again – 3 from the corner. 82-67. That gives RayRay 16 for the period and 24 for the game. Its safe to say that we’ll probably see the shooting sleeve in game 6.

The Garnett Wallace matchup is in full effect. KG hits the step back fadeaway over Sheed. On the other end, Sheed dribbles free for yet another three, 86-74 Boston.

Back to back scores from Rip and it’s an eight point game. Moments later, Rip hits a three to keep the Pistons within striking distance. After sloppy play Rip comes through again, laying it in to bring Detroit within 8 with less than 7 remaining.

Hunter strips KG going up for jumper, ball out on him, Pistons ball down 6, Sheed comes up short on corner three. Again, the only drawback to all those hits from deep for Sheed is he probably wont be anywhere close to the point for the rest of the game.

Mr. Big Shot – Billups comes off the bench and hits a three from well behind the arc, 92-88.

Rondo slips one past Wallace. The layup from Double-R puts Boston up 94-88.

Billups baits Rondo into the foul behind the arc. Hits them all. As poorly as Detroit’s played, it’s a two-possession game with less than three minutes.

Perkins picks up a technical. As was mentioned in the game 4 notes, Perk has a swagger that exceeds his actual talent. When you’re Kevin Garnett, you can be demonstrative. When you’re Kendrick Perkins, a 23-year old role player, you should put away the screw face.

Sheed denies the bejesus out of KG, bodying him so he cant get possession and forcing Doc to call a 20 second timeout. Out of the timeout, Rip sets up with help defense on KG, letting Ray slip free. RayRay takes advantage of the daylight and drops one from the corner, C’s +3 with a minute left.

Other end, Billups misses two attempts from the field to cut the lead to one.

Down goes Rip, clutches his elbow after the Pistons force a Boston miss. Meanwhile, Rondo fouls, put Detroit to the line as oppose to letting them tie it with a three. Stuckey hits them both, 102-101 with 8 seconds left.

Clearly I made the wrong decision by attending the formal post game press conference and not going into the Pistons lockerroom after the game. As much as I enjoyed seeing the spawn of Perkins at the podium, sounds like I missed quite the tirade from Sheed.

I guess its comforting in the end that in a series full of surprise performances and inconsistency, Sheed can be depended on for an expletive laden tirade.