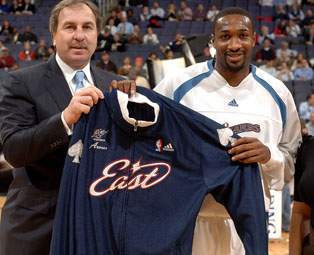 This was billed as an extremely important game for the Wizards. One in which they could make a strong statement about their standings in the East and potential in the playoffs. I was supposed to interview the lovely All Star dance teamer Crystal, but it got pushed back till either Saturday when Kobe comes to town or Wednesday when Tim Duncan and Manu ‘I’m bleeding’ Ginobli hit the Verizon Center. That’s probably better cuz then you guys have time to chime in on questions to add to my “Things you’ve Always Wanted to Ask an All Star Cheerleader” interview by commenting below.

Anyways, back to what I was saying best in the east, big game blah, blah,blah. I’m not going out on a limb saying the most exciting thing about tonight was that it was Fajita night in the Press room. I got seated just before tip off and in time to see Gilbert receive an East All-Star jump suit for being a starter. Stylish.

So the Pistons get introduced and they have quite a few Detroit fans in the building. Kinda makes sense since there are 3 former Wizards players in the Pistons starting lineup. This is like old vs. new.

-First shot of the game is a deep two from Jamison- (In Bill Walton voice) “Get in the post big man!” You’re 6’7 on a team with no inside presence would it kill you to post up rather than launch threes? (Later we find out it probably would)

-Tayshaun hits a 3 as the shot clock winds down.

-Haywood comes back with a nice dunk off an Arenas pass.

-After seeing the Suns the other night the Pistons look like they are playing in slow motion. There’s no movement on the floor and even the defense is lackluster.

-Wizards jump out to a quick 8-3 lead and have hit all of their shots. Arenas already has 4 assists.

-DeShawn Stevenson scores on the only play I’ve seen called for him all year.

-Tayshaun has all 5 Pistons points…Make that all 7 now.

-Webber’s short hook makes it 12-9. The Pistons front court is huge yet they are calling very little post plays. Flip what are you doing down there?

-Jamison goes up with a weak lay-up and is blocked by Hamilton. During the loose ball he clashed knees with Stevenson and is down. He’s up now and walking off but in obvious pain. Calvin Booth makes an early entrance.

-Evidently regardless of the quality of players they have on the floor the entire Pistons offense is Tayshaun Prince Isos.

-Wizards just hit a bunch of buckets, a three from Arenas, a Caron jumper, another J from Calvin Booth, and a DeShawn Stevenson dunk off of bad D by Rasheed.

-Stevenson just hit another shot. He’s 5-5 and actually has a legitimate reason to do his ‘my hand is on fire’ routine.

-McDyess comes in and makes an immediate impact. First, a bucket from a behind the back feed from Billups and then another post play. Of course this is quickly followed by two awful missed lay-ups. It’s 30-18 Wizards at the end of the first and I’m realizing I may lose consciousness by halftime.

-The 2nd quarter starts with Delfino getting blocked by two Wizards.

-Hamilton is whistled for his second offensive on the other end and gets a tech.

-Dale Davis in the game. At first I thought it was Elden Campbell. Is Elden still alive?

-Bad pass to McDyess who is wide open from cherry picking yet loses the ball out of bounds. 37-23 Wizards.

-Caron hits a bucket. I may have said it before but you gotta love the fact that he has his own theme music when he hits a shot.

-Gilbert hits a 3 and his stat line looks like this 10 pts, 4 boards and 7 assists with 7 min left in the half. Let the triple double watch begin.

-USC coach Pete Carroll just emerged from the tunnel right next to the press section. Wonder what he is doing in town?

-Tayshaun hits a 3 and then abuses Arenas with a spin move to close the gap to 45-32.

-Unfortunately, more of the same. The Pistons offense is moving at a snail’s pace and at this rate the 10 point lead might as well be 50.

-White Chocolate and a big Asian dude not named Yao are in the house.

-Mid second half action has Billups and Stevenson exchanging threes to keep the Pistons within 10.

-Another offensive foul on Rip

-By the 4th the Pistons are creeping up. McDyess hits a tough and 1 to bring them within 7.

-McDyess hits a fadeaway and its 80-73. Why they weren’t pounding it down low the whole game I don’t know.

-Tech on Chauncey. If the Pistons weren’t leading the league with technicals they will after this game. Shockingly Sheed has none.

-7 minutes to go and Arenas needs another 4 rebounds for a triple double. He already has 28 points and 10 assists.

-DeShawn just hit another jumper. This is like his best game ever.

Locker room is just as lackluster as the game. We head to the Pistons locker room first. Everyone is asking Rip and Chauncey about their disappointing play the last few games. They both express a little frustration at their lack of success and drive the team should be showing. Though Chauncey gives the Wizards a few props for the victory, but comments that his team has been giving up way too many victories to teams they should be beating. If the Pistons play like this in the playoffs, theoretically, the Wizards could make it to the Eastern Conference finals.

After that we head over to the Wizards locker room.  Antonio Daniels is holding court but other than that everyone seems to be gone. Oh well, its all about Kobe and Crystal Saturday. Everyone is excited for the Mamba. Don’t forget to drop those questions.