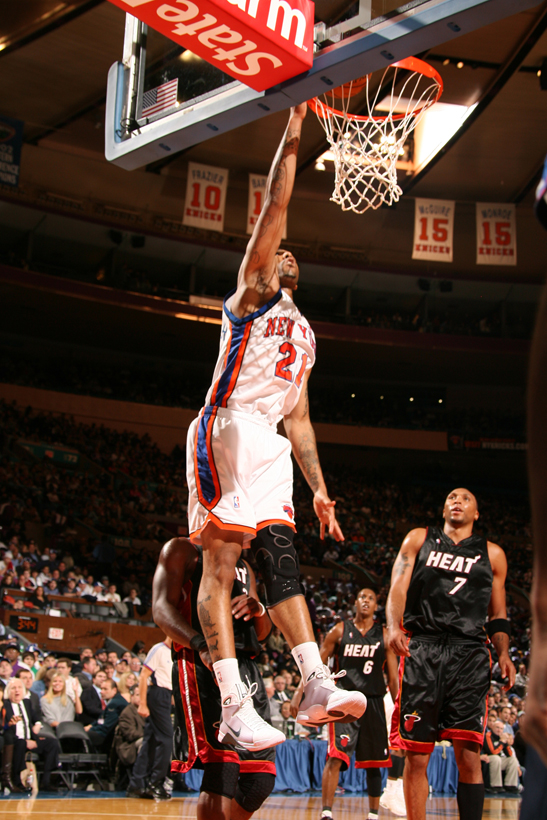 –I ride the elevator up with a few people, including Spike Lee. Spike’s head is down. I don’t bother him because I’m pretty sure bothering Spike Lee at MSG is like messing with the Pope during Mass.

–The black plastic prong on the right end of my fork does a Shaun Livingston impression when I stab into a decent piece of baked chicken.

–Discussion centers on what the Knicks’ starting lineup theme song should be, as I contend that “Stronger” is too played out to get another year in rotation. Lang suggests “Swagger Like Us.” I counter that, given the team in discussion, it probably wouldn’t be wise to use that song in a literal sense.

–After Michael Beasley daps with the assistant coaches as the warm-ups wind down, he briefly stares into the depth of the crowd. He’s arrived.

–Jamal Crawford, perhaps buoyed from the opportunity to borrow Lang’s pen in the locker room, gives a brief speech to the crowd.

–Hip-Hop and R&B backup sensation, Chrisette Michelle, sings the national anthem. From the jumbotron perspective, it looks like she’s got a chunky Lisa Turtle thing going on.

I tell Khalid this and the following ensues:

“Saved by the Bell…”

–Lang points out astutely the game storyline that nobody’s thought of: the potential revenge of Marcus Banks, who used to play for Mike D’Antoni.

–Who knew the game came with free Q-Tip pre-game and halftime concerts? I would have never

been able to guess that; the dude would have to walk all the way from his courtside seat to center court. That’s like four feet! Really though, as a Tribe loyalist and someone whose brother is still scheduled to act in an Indie film with Tip, I’ve got nothing but love for him, even though the “Go NY” performance is corny. At its conclusion, I get my Phife on and remind Khalid that Starks got ejected.

–It turns out the Knicks have selected Jeezy’s “Put On” as their pre-game music of choice. Neither Lang nor I recognize it, though I know I’ve heard it a few times. Maybe the most uninspired hip hop hit since…it’s like I can feel this generation gap suddenly shifting.

–Beasley scores on a pretty spin to start things off. JC responds. Shortly thereafter, Crawford drains a three to put the ‘Bockers up 5-2. He’s on pace for a 160. Literally. When he hits another jumper—a deep 22-footer—over Marion 25 seconds later, he’s on pace for 140. When somebody else (Zach Randolph) is able to take—and make—one, the Knicks go up 9-3. Lang notes that anybody betting on the over/under should have taken the over. He’s right.

–Lang jokes about how “tough” this ubiquitous Chalmers/Haslem two man game is going to be this year. This occurs shortly after Z-Bo passes to a cameraman. At least DWade is buckets early on. Though we may have laughed about a repeated play featuring the two least offensively inclined members of the Heat starting lineup, Spoelstra establishing Haslem early may not have been the worst idea: he finished with 23 and 10 on an efficiency-is-that-new-kind-of-statistical-crack 10-13 from the floor.

–A JC three puts the Knicks up 12-7. He’s on pace for 120. Literally. The Jamal Crawford Oven has finished preheating.

–Marion ties it at 14 to cap a 7-2 run that featured some poor interior rebounding by the NYK starting unit.

–Dwyane Wade is creating now, too. The game is getting back and forth, with little D (surprise, surprise!) being played and some all-too-apparent sloppiness.

–Danillo Gallinari enters and matches up with…Shaun Livingston? He bricks his first NBA jumper, partly because he had too much time to think about it. The MULBERRRY STREET, STAND UP! era will have to wait.

–Wilson Chandler, the green grass to playing time’s funky fertilizer, throws down a FEROCIOUS follow-up dunk, then Wade gets sloppy and turns it over, which leads to a Nate Rob lay-up. 34-31, Knicks.

–Good aggression inside from Z-Bo and some solid work on the boards combined with the return of the Jamal Crawford Oven keys a 10-1 run, and the ‘Bockers take a 47-40 lead.

–Z-Bo casually nails a somewhat—and I say “somewhat” because it wasn’t that early in the shot clock—ill-advised 21 footer. After the swish, Flava Flav blares over the Garden loudspeaker with his trademark, “YEAHHHHHHHHHHH BOYYYEEEEEEEEEE!” I turn to Khalid and note that “YEAHHHHH BOYYYYEEEEEEEE” is exactly what must have run through Randolph’s head when he launched that. Khalid collapses over on to the media section table in laughter. I’m funny. Go me.

–The Knicks build the bulge to 15 by the break. Quentin Richardson is seen and heard from. Good for him.

–We chat with former SLAM copy editor Sam Blake Hoffstetter about various things. SBH is the certified genius that got Lang and Khalid to be a part of VH1’s I Love the New Millennium and is working on a new celeb- reality show that sounds fantastic.

—Lang bounces. Khalid and I split our attention in the media room between plasmas showing the final innings of the World Series and the Knick game. Per the game we

–The patented Up-Tempo Collapse (TM Russ Bengtson) made an impressive showing, not surprisingly, under new Up-Tempo coach, Mike D’Antoni. As Daequan Cook impersonated Reggie Miller and buried three after three as the game wound down, it appeared that the Knicks might find an incredible way to ruin their opening act.

–The Knicks gave up 40 points in the fourth quarter and Miami still didn’t sniff 50 percent from the floor for the game. Meanwhile, the Knicks shot decently from the floor, the arc and the stripe. There will be days when the shots won’t be falling for the ‘Bockers, and those days will be long. On the other side of the coin, the Heat should be okay when they get good shooting nights from their big three, who shot a combined 18-50.

–Kudos to D’Antoni for not playing Steph or Curry. If my experience not getting burn in college has taught me anything, it’s that this invaluable and unavoidable time spent on the bench together should lead to a budding clique friendship between Steph, Curry and Jerome James. I smell a reality show…Somebody call VH1! Do we know anybody there? YES!

–Kudos to every Knick that got major minutes for playing solid basketball.

Thoughts I Didn’t Get to from Cleveland-Boston:

—Early first: With Mo Williams and Z working a pick and pop early in the quarter, LeBron flashed down low looking for an easy dunk. Z’s errant pass sailed out of bounds off of LeBron’s finger tips, but it was a great idea. That’s the stuff the Cavs need to do on a consistent basis to give their offense the best chance at success: move and find the gaps in the defense when someone other than LeBron is handling the ball.

—Mid first: His shot off early, LeBron moves without the ball and Z finds him for a sick oop. Less touches with Mo Williams on board—especially during this early season feeling out period— and LeBron does the right thing. Eye contact between Z and LeBron on opening night comes from five years of playing together. What are the odds that LeBron knows the capital of Lithuania? Even?

—Second: Lorenzen Wright nails a baseline jumper. Re-wind Tivo. Apparently this occurred because J.J. Hickson missed the bus (literally), and was subsequently benched. This is disappointing because after hearing Cub Buenning’s rave Hickson review, I’m eager to see what the kid can do.

I already mentioned the Indie that my brother is slated to do with Q-Tip, not to mention some other really talented actors in Justin Bartha and Jesse Eisenberg. Related, both of my bro’s first two Indies (Teeth and Beautiful Ohio) should be available at your local Blockbuster. As such, please make it a Blockbuster Applesauce night. And if you’re in NYC, check out baby bro in the off-broadway revival of Streamers, a gripping play about race and sexuality that also features J.D. Williams (Bodie from “The Wire”) and Ato Essandoh (Titembay from Garden State).

It’s almost November: The NBA, drama and good films…what more could you possibly ask for?