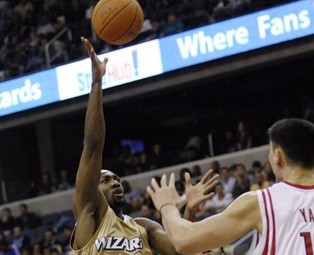 On Saturday night I made my way to the Verizon Center a.k.a. ‘The Phone Booth,’ smack dab in the middle of DC’s Chinatown, to see the Wizards take on Yao Ming, T-Mac and the Rockets. I was pretty excited since this was my first game report for Slam so I was taking everything all in. I rolled up to the media entrance and picked up my pass and was ushered into the press lounge where I saw a bunch of local media heads mulling over their notes as they picked up their complimentary meal before tip off.

They treat the media pretty well here. You get all access and free food. I was told that every few weeks different restaurants sponsor the catering. This week it was the Hard Rock Café and they served up some beef, mashed potatoes and vegetables. You have an hour to float between locker rooms so after I grabbed a drink I started making my way around. I didn’t see anyone in the Wizards locker room so I headed to the Rockets area. The whole locker room situation is a bit strange at first, especially after the game when reporters bum rush guys right out of the shower. It’s kinda like if someone you didn’t know had a key to your crib and they just come in and start talking to you and snacking on your food. Maybe that’s just me.

Rockets Locker Room
I don’t know what I was expecting, but when I walked in the scene was pretty mundane. No music and everyone was real quiet. Tracy McGrady was watching some film of their last game against the Wiz, Rafer Alston (Skip To My Lou) looked like he was paying bills as he was filling out his will call ticket envelopes and Shane Battier was on the floor getting stretched out to the point that I thought he might be part of the halftime contortionist act. After a while Alston started talking about how he wanted to make the NBA All-Defense team and gave Battier a few props saying whatever team Shane made he’d need to be one tier below it. Around this time the trainer put in a Gilbert Arenas highlight film. I asked Chuck Hayes who was gonna guard Arenas tonight and he said, “A little bit of everyone.” A couple of Georgetown students were doing a story on Mutombo and got a few quotes from Alston asking if he ever caught a couple elbows from Dikembe. After that Yao came in and was immediately flocked by five or six reporters but all in all it was uneventful.

Wizards Locker Room
I trooped back down the hall and finally saw some Wizard players in the locker room so I went in. Pretty nice spot. A couple of huge flat screens were playing the last meeting with the Rockets and some upscale office chairs outlined the room. It was a quiet scene similar to the visitor’s locker room until James Lang found some thick glasses on the counter and started wearing them around the room. This guy is like a big kid. This led to several of the players laughing and making fun of him. He seems like the class clown of the group. Then he and DeShawn Stevenson started unofficially negotiating how much he’ll charge Lang to rent his Excursion. I don’t know how much the NBA minimum is off the top but I’m pretty sure it should be enough to cop a ride. The figure was at $1,500 a month when I jetted. James, I got one word for you dude: Carmax.

Gametime!
Before I headed up to press row I watched a few players warm up. Yao was running past me doing some sidestep suicides and I swear he almost tripped over me twice. Obvious comment of the piece, Yao Ming is huge! Anyway, I found my seat and mingled a bit with the other media heads and the first thing I noticed was the Wizards were wearing the same uniforms from the game in Philly. I thought those were the away jerseys? Evidently it’s both home and away. I didn’t even know you could do that. Maybe that’s their alternates. When I saw them the other night on TV I thought they were god awful. However, in person the color choices are not that bad just really random.

Gheorghe Muresan and Kevin Lyle in the house.

Juwan Howard is announced to a wall of boos and they keep it up every time he touches the ball. It seems Washington fans don’t forgive or forget.

Yao’s first attempt got blocked but he just broke out a Patrick Ewing fade away from ‘93. It doesn’t take a brain surgeon to figure out he’s gonna be a problem all game.

Chuck Hayes shoots foul shots like the ball is glued to his hand with a shaqlike hesitation.

Antawn Jamison is making a strong comeback after his off night in Philly. He’s got a three, six boards, two steals and eleven points (5-7) already. Arenas, however, can’t get anything going. He ends the first period 0-6 from the field and 0-4 from the line. At least he doled out four assists. Two minutes into the second I see Arenas run back to the locker room. He comes back with a new pair of kicks so let’s see if this helps his shot any.

The Rockets bench just got a tech for breathing too hard. The refs are really bugging this year.

Haywood heads back to the locker room. With six minutes to play in the 2nd the Wizards already lose one of their big men. He’s probably their best one on one match up with Yao based on size alone.

Back to back threes for Arenas.

Skip just pulled out an And 1 Vol. 1 move on Jamison, freezing him with a behind the back fake for the lay-up.

Another three for Arenas. He’s 6 for 6 in the quarter with four threes and 19 by halftime. ‘Is it the shoes? The shoes, it’s gotta be the shoes!’

One of the guys next to me leans over and says “At halftime they have ice cream for media, follow me.” More junk food. Sure enough we head in and everyone is lined up getting their choice of vanilla, chocolate, butter pecan, cookies ‘n cream, strawberry and blue chocolate chip (?).

Haywood is done with a thigh bruise.

Halftime show contortionist in full effect. I could do without that but I am not mad at the Wizards dancers.

Yao’s shutting down all drives to the basket which is a huge part of the Wizards game plan. His five blocks have already set the tone.

Early second half and Skip’s already got four fouls. Can’t get NBA All-Defensive team like that homey. The last two calls were pretty suspect though.

Chuck Hayes finishes the night early with 6 fouls before the end of the 3rd.

James Lang making his first appearance in the game.

Is it me or does Antonio Daniels look just like Masta Ace?

Nice back and forth in a close game going into the fourth. McGrady dropped a quiet twelve to end with 28 giving the Rockets a five point edge.

Delay of the game due to a lighting situation? Who knew there were NBA lighting standards? These guys grew up playing in the parks in the dark so this is nothing.

Did they just throw on ‘Poison’ by BBD?

Where’s McGrady? He’s not on the floor and now that I glance over to the bench he’s not there either. All of press row starts speculating back spasms. Looks like it’s all up to Yao.

Etan Thomas just landed on his ankle. How many times have I done that in the gym? As I watch him hop back to the locker room I already know he’s done. Yao’s picking them off one by one. Lang’s getting more burn than he ever imagined.

They need to double Yao before he makes his first move. He’s killing them with that turn around J. Ewing’s gotta be proud.

Here comes seven-footer Calvin Booth for the Wizards. I’m expecting the kitchen sink to get the call on the next stoppage of play.

After a quick score by Houston, Howard gets a tech and fouls Jamison on a 3 point attempt. 4 point play. Wizards by 1.

Arenas goes for #8 and misses. McGrady defends but when he lands he clutches his back. Timeout with 6:55 to play. T-Mac is helped out by two trainers. That’s never a good look.

Wizards are pushing but Yao’s turnaround J is keeping them at bay. 105-99 with two minutes left.

Holy Caron gets a key goaltending call and foul to bring the Wiz within 4.

Nice lay up by Arenas to bring them within two.

Yao with a lay up.

Arenas takes it right back in and kicks it out to Calvin Booth at the top of the arc. He fakes a pass left and drains a three to bring them within 1. If the Wizards pull this one out that will be the biggest shot of the night. Timeout with 30 seconds to go.

The Rockets are burning the clock. Six second difference from the shot clock. You gotta know they’re going to Yao. Quick move and another turnaround. He’s fired up.

Eleven seconds left. The Wiz are probably gonna shoot a quick three. Arenas inbounds and then gets it back but his shot is short. Rebound Rockets and that’s the ballgame.

Although the Wizards didn’t win, the elementary schools in the area have to love Arenas and his “Gilbert Scores for Schools” program. He’s donating $100 for every point he scores each game and lately he’s been lighting it up with four 30+ games in a row. Tonight’s recipient of Gilbert’s $4,100 is the Bethesda Elementary school.

Post Game
At the end of the game nobody is really talking. The Wizards held a closed door team meeting and most of the players left immediately afterwards. Everyone headed to the visitor’s zone. As we waited to get into the Rockets locker room Asian reporter Tricia Takanawa and a whole contingent of Chinese media came down the hall to wait on Yao to drop some quotables.

Once we finally got in T-Mac was on his way out but he answered some questions on Iverson’s impending trade saying he wished him the best of luck. He definitely looked like he was still in some pain as he hunched over to speak. Then again it could have been the huge conflict diamonds in his ears weighing him down.

After that reporters just surrounded anyone coming out of the shower. Something about asking a guy a question while he’s drying off his back is just wrong. Would it kill them to give these guys five minutes to put their draws on? I told another reporter I don’t see how they can get used to it and he said, “This is nothing, Tyronn Lue comes out and does interviews buck naked.” Remind me to never go to a Hawks game.