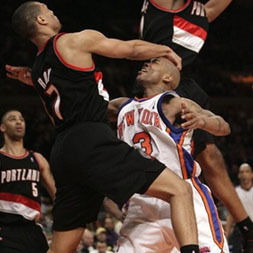 When you’re a team on the bubble, fighting for your playoff life, there are games you absolutely need to win. Not just to gain ground—or at least maintain distance—on your rivals, but to show that you can win when it matters. That you can stand your ground. Home games against lottery teams? You absolutely need those.

That’s why this Knicks loss—92-86 to the Trailblazers—may have been their worst of the season so far. The Blazers came in 13 games below .500 and missing their best player, Zach Randolph (bereavement leave). And the Knicks were on the first night of a back-to-back, as they play the Cavaliers in Cleveland tonight. With David Lee finally returning from injury, they absolutely needed this game.

And they didn’t get it. Eddy Curry disappeared again, and on the first night of the Sweet 16, the Knicks turned into a college team—relying heavily on the three-pointer. And while Nate Robinson hit a remarkable 8 of 9 from 23-9, the rest of the team didn’t do so well. As in, 4-18, with Stephon Marbury going 3-12. They got absolutely nothing from Jared Jeffries—who has been a complete bust—and a combined four rebounds from Curry and Jerome James. The whole team with the exception of Robinson was strangely flat all night.

Meanwhile, it was the young Blazers who looked like they were fighting for something. Brandon Roy, the rookie of the year favorite, scored a team-high 24, and Jamal Magloire added 14 points and 16 rebounds.

The Knicks could still make the playoffs, of course. Neither the Nets or Magic has been very consistent, and they still have games remaining against each team. I’m just not convinced that they want it. Or deserve it.

On to the notes.

• Over on the Knick side, David Lee is suiting up. Finally. A crowd gathers. “Basically, I was tired of wearing a suit,” he says. It’s not entirely sure whether he’ll even play tonight (they may need him more tomorrow against Cleveland), but he’s gonna be ready just in case. “Isiah and my teammates have put so much trust in me, I want to be there for them.” Fair enough.

• Nate Robinson and I have a pretty involved conversation about shoes. But that’s gonna get its own post a little later.

• FOOD: Mashed potatoes, some sort of sloppy joe/meatloaf hybrid, string beans. The company (what up Bobbito—the shoes look even better in person) is much better than the fare. But it’s better than mystery parmigiana, at least. B.

• The Knicks jump out to a 4-2 lead on buckets from Jeffries and a glasses-wearing Channing Frye.

• Quentin Richardson is not in the house. Nor is Jamal Crawford. Plenty of room on the Knicks bench tonight. And in the stands, for that matter.
• The Blazers starters: LaMarcus Aldridge, Brandon Roy, Ime Udoka, Jarrett Jack, and Jamaal Magloire.

• Kareem Abdul-Frye scores on a short jump hook. (After the game I mention to one of the Knick beatwriters that I want to ask him if he’s going to add a sky hook. “It would go over better if he had a sense of humor,” he says.)

• Steph hits two threes in less than two minutes, and the Knicks are rolling, 14-9. In fact, every one of their starters is on the board, except Eddy Curry. He hasn’t proven particularly adept at either passing out of the double team OR driving and getting to the line (he’s more likely to commit an offensive foul), so they’re not even going to him. Sorry, E-City.

• He does block the hell out of Brandon Roy, though. Although Jamaal Magloire returns the favor on Jared Jeffries on the ensuing possession. And Ime Udoka—who played eight games with the Knicks last year—splashes a three from in front of his old team’s bench. And a Jack layup ties it at 14.

• Curry and Steph go with the two-man game on the right block. Eddy cuts backdoor, and Steph jacks up a three. Off.

• David Lee gets up off the bench to thunderous applause. When he checks in for Curry, he gets a scattered standing ovation.

• Magloire has a slow-motion move into the post that he finishes with a rather strong one-handed dunk. It’s worth noting that each of his arms are approximately 12 feet long.

• Brandon Roy is really, really good. He gets a bucket on the baseline, and then comes back down the next possession, pump-fakes Balkman into the air, draws a GANG of contact, and still hits the soft shot off the glass. And 1. He’s got 13, Blazers by eight.

• Hey wow, it’s Luke Schenscher. Is it garbage time already?
• Martell Webster’s in as well, and here comes Fred Joooooooones. Yes, the Blazers use 10 players in the FIRST QUARTER. Blazers lead 26-20 at the end of 1.

• David Lee grabs a defensive rebound, then gets his first shot of the game. Er, of the month. And it looks like it. But it gets back to Robinson, who buries a three. Get used to that.

• Sergio Rodriguez, 2 (from 20-plus, still). This is turning into a college game.

• Nate misses a corner three (he won’t do it again), Lee deflects the rebound, and Balkman collects it for a fairly easy 2.

• Outlaw misses, Aldridge gets it to Joooooooones underneath, and he’s SNUFFED by Jerome James. Yikes.

• Steve Francis tries to join in the fun, misses from the corner.

• Jack finds Aldridge with a well-placed alley oop, and Steph misses a three.

• Roy drives the lane, the defense collapses, and he drops it off to Aldridge for another easy dunk. 39-all.

• Magloire catches the ball underneath with Francis on him—who can only hack him. He goes 1-2 from the line, so it’s a good foul.

• Eddy Curry scores on the first possession of the half. It’s his first points of the game. Then it’s Frye in the low post. Knicks lead, 48-45.

• Gets tied up again at 50, and then the Blazers start to pull away. 54-50 on two Jack free throws. The Knicks actually commit their fourth team foul with 7:56 to go in the third. Efficient! Roy scores on a runout, and it’s 57-50, Blazers. Balkman hits one of two from the line, and Magloire gets two on a dunk. 59-51. Curry commits an offensive foul, Roy hits a baseline J. That’s 17 for him, and the Blazers lead by 10. Pathetic.

• Steph misses a three, the Knicks call time. At least the Balkman charge that Isiah drew up in the huddle works to perfection.

• Weird sequence. Magloire is fouled by Lee, hits one of two, gets his own rebound, is eventually fouled again, hits the first and airballs the second. Blazers up 63-51 with five minutes to go.

• The Blazers are called for a defensive three-second violation, and Nate bricks the freebie.

• 69-62 Blazers at the end of three. The Knicks have hoisted 21 threes—Steph’s taken nine, missing his last seven.

• The Knicks start the fourth with a lineup of Francis, Steph, Nate, Balkman and James.

• Eddy Curry gets blocked by Outlaw—he thinks it’s goaltending—and while he debates this, Fred Jooooooones scores on a layup. 77-65 Blazers with 9:08 to play.

• Curry gets the ball in the post, gets doubled, finds Jeffries under the basket with a well-placed pass—and Jeffries drops it out of bounds. Good stuff.

• The Knicks tumblers come out and set up the trampoline and mats—at half-court. It makes about as much sense as their offense.

• Curry DOES get a goaltend, and Nate starts yapping to Magloire for some reason. Um, maybe wait until you have a lead or something?

• The Knicks call time, and plan the perfect Eddy Curry offensive foul. Two seconds in, there it is. Jerome James comes in for Eddy.

• Nate misses a two, gets his own rebound, hits a short shot off the glass.

• Nate gets fouled by Jack on a three-point attempt, hits all three. That’s 86-81. Jack airballs a three, ball goes out of bounds to the Knicks.

• Roy draws a QUICK foul while the Garden’s still celebrating. Hits one of two.

• Curry misses over Magloire, and Aldridge gets the rebound. On the other end, Udoka hits a cutting Aldridge with a perfect pass for a two-handed dunk. 89-84 with 1:43.

• Magloire’s called for an offensive foul, but Frye (who’s ditched the glasses) shoots an airball off a curl at the top of the key. That’s pretty much it.

• Nate scores a superfluous layup to get his 31, and Jack dribbles out the clock. Final score, 92-86, Blazers.

• I pretty much HAVE to hear what Isiah says after this one. He starts strong. “Uh, as you see, we’re definitely struggling to score the basketball.” Yes. We see that. How about explaining the 20-plus three-point attempts?

• “Teams have figured out how to play us right now. We have to find a way to play.”

• “I think we had situations out there where we just had the ball in the wrong peoples’ hands on the offensive side. They forced us to take some shots we don’t ordinarily take in our offense.” Like, say, the 15 missed threes? Those?

• “Scoring the basketball has been a big problem for us.” Are you starting to note a theme here?

• “When he’s double and triple teamed like that, our perimeter guys have to kick in.” Wouldn’t hurt for Eddy himself to play better, either.

• “We’ll figure it out, we just gotta find some ways to…” You can fill in the rest. Really.

• About Lee. “You could tell that his timing’s off. I just tried to get him in and get him used to getting hit again.”

• Over on the Blazers side, Roy was pretty happy with things. “All season long we’ve been in tight situations, tonight was nothing new. They made a lot of runs at us, but we were able to hold them off.”

• “I think with Zach, he’s so dominant in the post that sometimes we go to him too much.”

• One of the Portland beatwriters follows up with the obvious question. “So, are you better without Zach?” Roy, anticipating it, is laughing before the question’s even finished. “We know we can play four games without him, but for an 82-game season we NEED Zach.”

• Then there’s the rookie of the year question. “I’m not trying to put that pressure on myself right now. I’m just trying to have fun and win games with these guys. It would be a huge honor, though—I’m not trying to downplay it.”

• Just for the record? Jamaal Magloire has the tiniest nipples I’ve ever seen on a grown man.