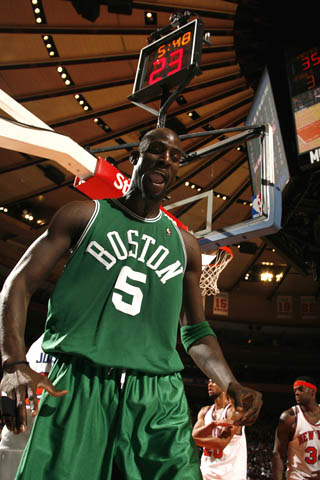 Strange things have a tendency of happening at Madison Square Garden’s annual Martin Luther King Day matinee. There have been episodes of passive resistance and nonviolence, and episodes of anything but. One time, both teams decided to take the day off. So with the Celtics coming to town, and the Knicks winners of four of their past five, it seemed likely that this would not be a typical game.

The Celtics have the DVD of their previous meeting with the Knicks running—a game where they went up by as much as 52 and won by 40-plus. This doesn’t seem like it would be worthwhile viewing. However, when point guard Rajon Rondo enters the locker room, he asks that the game—now past the midway point of the first quarter—be restarted. He then takes a seat at the back of the locker room next to Kendrick Perkins. It’s readily apparent why Rondo wanted a restart (and that particular seat), as he and Perkins dominate the early going.

I’m pretty sure I overhear Glen “Big Baby” Davis ask a reporter whether Allan Houston still plays for the Knicks. At first it’s laughable. But then I realize, after that blowout, he’d be justified in not knowing whether Kenny Walker and Dick McGuire still played for the Knicks.

Kevin Garnett has a pair of 40-pound dumbbells next to his locker, and he asks Gabe Pruitt to carry one into the trainer’s room for him. I assume that, in order to make the game somewhat fair, Garnett will play with them taped to his ankles.

Both the Celtics and the Knicks are playing in Hardwood Classic gear today—including warm-ups with little replicas of their championship banners on the back. The Knicks have two, the Celtics have…16. As Khalid points out, the Celtic jackets look like telephone keypads. The Knicks need to slap some Post-It notes on their own to try and keep up. Like “KICK ME.”

It’s Martin Luther King Day, the Knicks have won four of five, and Isiah Thomas still gets booed during introductions. There’s something to be said for consistency, I suppose.

Malik Rose addresses the crowd before the tip. Definitely his best peformance of the season.

When I think “Martin Luther King,” the first ref I think of is Joey Crawford. Yes, today could be interesting.

Fred Jones starts, and is pulled for Nate Robinson with 8:16 to go in the first quarter.

How do you know your transition defense is terrible? You give up an open layup off a MADE free throw. Paul Pierce misses the layup, but Perkins is fouled on the follow.

PERKISABEAST.com, baby. He’s got 13 points with 6:40 to go in the first quarter. It’s worth noting that his career high is 21. Eddy Curry, making opposing centers look like All-Stars since 2001.

Apparently you can sign up to compete in the next season Pros vs. Joes, and Charles Oakley and Allan Houston will be participating next season. I immediately lose a lot of respect for Charles Oakley, and vow to punch myself in the face in memory of his dignity.

Z-Bo follows a Jared Jeffries missed layup (shocking, I know) with a two-handed dunk. Didn’t know he could do that.

Nate Robinson picks up his third foul. And yes, it’s still the first quarter. Not that Joey Crawford has a quick whistle or anything. (Just for the record, I’m blaming any and all referee decisions made today on Joey Crawford.)

Tony Allen and his giant knee brace come in for Paul Pierce.

When Martin Luther King had a dream, it probably wasn’t about David Lee and Brian Scalabrine guarding one another on the perimeter.

Curry and Perkins re-enter the game, accompanied by a hoarse “YOU SUCK, EDDY!” from the 400 level. I know this because I’m basically sitting with the guy. (No, it wasn’t Lang or Khalid.)

KG re-enters for Powe, Balkman comes in for Z-Bo.

Balkman fires up a three right off the bench, with predictable results.

Perkins scores over Curry, is fouled by Balkman. Hits the free throw. That’s 18.

Curry misses, gets his own rebound (his first of the night), scores.

Balkman picks up his second foul, this one on Garnett. Going the other way, Garnett picks up Jeffries at the top of the key, putting his palms to the floor and essentially going down on all fours. Intense? Yeah.

Pierce hits a jumper, then Garnett gets fouled underneath by Balkman (that’s an awfully quick three). Exit Balkman for Z-Bo. Garnett hits a pair.

After a pair of Curry free throws, Perkins is hammered by Jeffries, hits a pair of his own. He’s got 20 with five minutes to go in the first half. And, as you may have heard, he’s a beast.

Randolph fires up a three early in the shot clock. Nothing doing. This is as predictable a part of any Knick game as “FIRE ISIAH” and the Eddy Curry Obvious Offensive Foul™.

Rondo rips Crawford clean, takes it in for a layup.

Ray Allen blows a two-on-one alley-oop to Garnett. Didn’t even think that was possible. But Jeffries leaves a finger roll short, and Garnett gets another chance at a dunk. He doesn’t miss this time.

There’s a weird switch that sees Perkins guarding Crawford on the three-point line, and Pierce and Rondo doubling Curry in the post (Pierce fronting, Rondo behind). Crawford flicks in an entry pass, Curry isn’t paying attention, and it goes straight to Rondo. Boos.

Another Curry turno…well, you get the point.

Rondo splashes a corner two as the clock expires. 59-45 C’s at the end of the half.

Nate hits a layup and the foul, misses the free throw, gets it back, and hits a corner jumper. Celtics lead is cut back to 10.

KG misses underneath, Nate misses a three. Perkins does not miss. He’s got 24.

David Lee charges into Leon Powe out of a time-out. Nice play, guys.

Q shoots an airball, Garnett corrals it, sends it ahead to Rondo, who’s fouled by Q.

Rondo is then even more thoroughly fouled by Curry.

Pierce drives on Q, is fouled. They’ve been jabbering at each other for a little while now, so Joey “Mr. Understanding” Crawford hits them with the double tech.

As Khalid points out, there’s no rhythm to the game in this quarter. Just fouls, whistles, and missed shots. Oh, and turnovers. Whoops, foul on Q.

After a Knicks 20, Pierce gets the ball, goes straight at Q. Third straight foul on Richardson, his fourth.

2:57, the Garden welcomes Giants Aaron Ross and Steve Smith. They receive a huge ovation, and not for their (questionable beyond all belief) wardrobe choices. Smith looks like he lost a bet with Cam’ron. While they’re still on the scoreboard, Pierce walks over and shakes both of their hands before heading to the free-throw line. An impromptu “LETS GO GIANTS” chant starts.

Eddy Curry catches a violent putback dunk over Perkins, then stares him down. Perkins looks back as if to say “dude, I scored a career-high 22 points in the first half while you did absolutely nothing.” Oh wait, that’s exactly what he’s saying.

And hey, look at that. Pierce and Q are still going back and forth, so Joey Crawford ejects them both. Pierce has 10 points and seven assists, Q has zero points and four fouls. This is definitely Q’s biggest contribution of the afternoon. And while it may be Martin Luther King Day today, EVERY day is Joey Crawford Day. What a jerk. It’s 80-63 Celtics with just under two minutes to go in the third.

The crack Garden crew is serving up the Giants in portions. R.W. McQuarters gets the same reception, the same “LETS GO GIANTS!” He’s dressed better, though.

The Celtics start the fourth with Big Baby, Powe, House, and the Allens.

This lasts for exactly one minute. KG enters for Powe.

Boston commits their 5th team foul with 9:40 to go in the game. A pair of Curry free throws cuts the Celtic lead to eight.

Ray Allen pushes it back to 10, Jamal Crawford cuts it to seven, and Ray Allen says, no, I liked 10.

Back to eight with 8:20 to go. Plaxico Burress is the last Giant introduced, and he appears on the screen flexing his hands, before pointing at his ring finger with a wild grin. Another “LETS GO GIANTS” chant. Somewhere downtown, Tom Brady caresses Gisele Bundchen before falling back asleep.

House misses a layup—or is it a pass—and Davis dunks it off glass. Z-Bo misses and House splashes a three off KG’s sixth dime. That’s 100 for the Celtics. This triggers two things—a time-out and a mass crowd exodus.

Enter Lee and Jeffries for Curry and Z-Bo.

Another House three—directly in front of the Knicks bench—stretches the C’s lead to 20 and the Knicks patience to the limit. In the ensuing time out, Isiah leads the team towards midcourt (what is this, West Side Story?), and is warned off by Joey Crawford (has he ever t’ed up an entire team?). If there’s one thing Eddie House can do, it’s hit clutch threes, and if there’s another thing Eddie House can do, it’s talk shit. Mission accomplished on both levels.

Brian Scalabrine enters for Garnett, who leaves to applause and cheers. Jerome James enters for the Knicks to boos and general derision. Mardy Collins also enters, but receives no one notices or cares.

Jerome James may be healthy now, but he still runs like he’s under syrup. Somehow he still gets two rebounds in less than two minutes.

Gabe Pruitt heads to the scorer’s table with roughly a minute to go, but never gets in the game.

Doc Rivers was not impressed. “I didn’t like any of it,” he says of the tech-filled third quarter. He understands that Pierce may have been provoked, but insists that they have to keep their composure. He didn’t like Pierce and Allen going over and greeting the Giants, either. “The game wound up being more like a show than a competition.” He also feels like Perk got out of his game in the second half—which is probably why he didn’t play much after setting his career high in the first half, and why he didn’t score after picking up his 24th point early in the third.

I ask facial hair aficionado Scot Pollard who he likes in the informal beard competition between Deshawn Stevenson and Drew Gooden. Stupid question. “I gotta go with Drew—he’s a Jayhawk.” In mildly more interesting Pollard news, he’s disappointed that the Pats beat the Chargers since they’re his third-favorite team (behind the Colts and the number-one Raiders).

Apparently, according to Pollard, I look like the lead singer of Clutch.

Garnett, in his usual sweater over shirt and tie and jeans, is the last out of the back. Most reporters are gone by the time he appears. One who’s remained asks about the Marbury situation, whether he’s been following what’s been going on. “No, I haven’t.” He looks up. “That’s it?” And like that—poof—he’s gone.